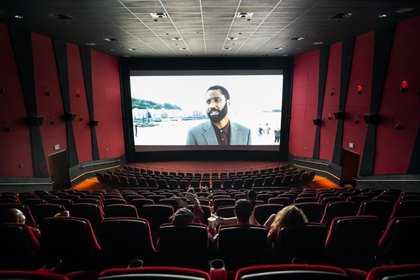 Next Thursday, November 26, 2020, after eight months of having closed their doors, some of the country’s cinema chains such as Cinemark, Cinépolis and Royal Films will once again welcome the public who love the seventh art.

This was reported by the film distribution and exhibition companies, who assured that due to the situation the rooms and spaces will have all the biosafety protocols so that users can enjoy the experience in optimal conditions.

“All of our collaborators have been part of a rigorous training in cleaning, disinfection and safety measures. They receive all the necessary personal protection elements to carry out their work; as well as they also have the responsibility of completing a registration before their shift, in which a coordinator performs temperature control, in addition to strictly following the established protocol and hand washing and disinfection, ”Cinemark said in a statement.

In the case of Cinemark, the security protocols for clients establish a decrease in the capacity of the rooms, with the intention of complying with national and local regulations. Film presentation hours will also be extended and chairs will be locked to the sides according to the location of the attendees, with the intention of maintaining physical distance.

At the same time, tickets can be bought virtually to avoid crowds, which will allow you to enjoy the tapes with as little contact as possible, and for those who wish to buy them at the Cinemark ticket offices they suggest bank cards to reduce risks.

Similarly, Cinemark indicated that any of clients who have symptoms such as fever or illness similar to those of covid-19 should refrain from entering the rooms.

“According to resolution 1746 of October 1, 2020, it is a requirement for people who attend our theaters not to have had symptoms related to covid-19 in the 14 days prior to the date of the performance, and not to have a history of contact with suspected or positive cases, “the company said in said statement.

It might interest you: This will be the route of the National Strike marches on November 21

He also points out that, The use of masks by employees and clients is mandatory, and they can only be removed when drinking or eating inside the rooms.

At the end of each function, all the garbage must be discarded in the bins located at the exit of the room, which will help the employees have time to carry out further disinfection.

Finally, Cinemark recommended that users be aware of physical distancing in all areas of the theater such as bathrooms, halls, corridors, confectionery, box office and the lobby, where signage was installed to avoid as much contact as possible. 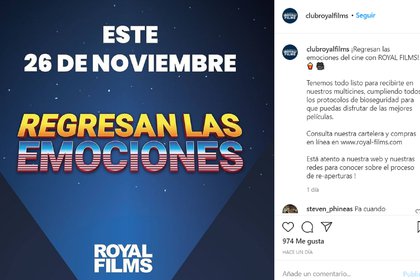 The film exhibition and distribution chain will reopen its doors on November 26. Photo: courtesy Royal Films.

For its part, Royal Films announced through its social networks “we have everything ready to receive you in our multiplexes, complying with all biosafety protocols so that you can enjoy the best films.”

For his part, the president of Cine Colombia, Munir Falah, reported this Friday that he will not open his theaters for the remainder of the year and wished his colleagues luck.

“Our colleagues at the Cinematographic Exhibition: Cinemark, Cinepolis and Royal Films, have set the date for the reopening of their cinemas in Colombia, for next Thursday, November 26. Cine Colombia wishes them the best and will be attentive to collaborate with them in whatever way it can, ”Falah said on his social networks.

You might be interested in: For eradicating illicit crops, the Army would have dispersed coca growers in Putumayo with shots