Paul Ricard’s 1,000 km put the end to an atypical 2020 season of the GT World Challenge Europe, inevitably marked by the COVID-19 pandemic. All in all, SRO Motorsports has managed to move this GT3 contest forward with four sprint and four endurance events that ended with a great show at ‘Le Castellet’. An event in which everyone has decided the champions of the Endurance Cup and by extension all the drivers and teams that have prevailed in GTWC Europe when competing in both sprint and endurance events.

The Endurance Cup was resolved in favor of Alessandro Pier Guidi thanks to the Italian’s victory in the 1,000 km of Paul Ricard with Tom Blomqvist and Côme Ledogar in the Ferrari # 51 of AF Corse. A triumph that has allowed Pier Guidi to close the season with 79 points and beat Matt Campbell, Mathieu Jaminet and Patrick Pilet by 14 points, drivers of the # 12 Porsche GPX Racing. For their part, the podium of the Endurance Cup was completed by Sven Müller, Christian Engelhart and Matteo Cairoli, drivers of the Porsche # 54 of the Dinamic Motorsport team. 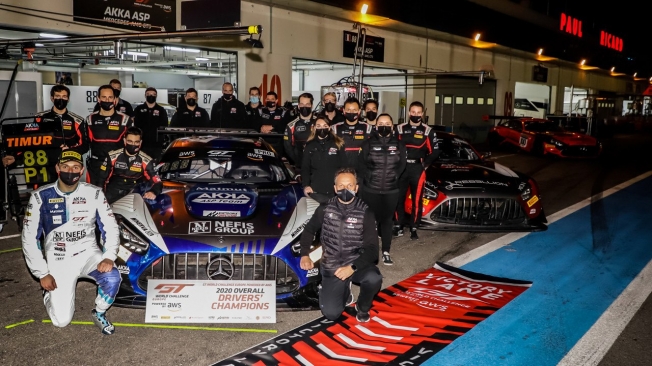 Timur Boguslavskiy has been the absolute champion by pilots of the GT World Challenge Europe 2020.

Although Pier Guidi won the Endurance Cup, the team title went to SMP Racing. For its part, the Silver Cup title has gone to Frederik Schandorff, Alex MacDowall and Patrick Kujala, Lamborghini # 78 drivers of the Barwell Motorsport team, a structure that has also scored the team title. For its part, Chris Goodwin and Alexander West have been proclaimed champions of the Pro-Am category of the Endurance Cup at the controls of Aston Martin # 188 of Garage 59, a team that has taken the team title. By last, Stéphane Triabudini has won the Am Cup.

In parallel to the resolution of the Endurance Cup, they were also defined the champions of the GT World Challenge Europe 2020. In the absolute classification that joins the endurance and sprint tests, Timur Boguslavskiy has been the champion as driver of the Mercedes # 88 of AKKA ASP, since the Russian driver has been the only member of this car who has disputed all the events. But nevertheless, the team title of the absolute classification of GTWC Europe has been for Team WRT Audi, despite the fact that Dries Vanthoor and Charles Weerts have been runners-up in the competition with the Audi # 32. 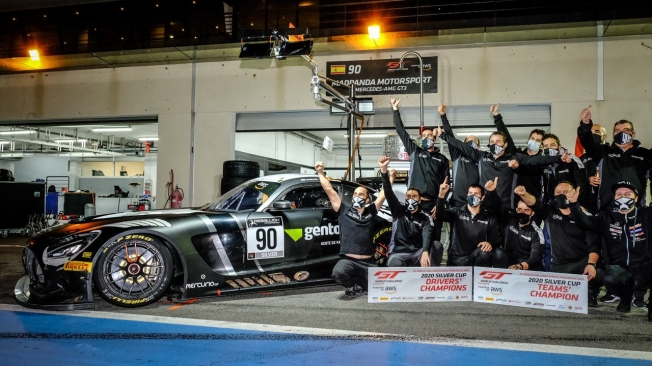 Ezequiel Pérez Companc and Madpanda Motorsport have achieved the absolute title of the Silver Cup 2020.

With regard to the rest of the category that comprise the GTWC Europe, Ezequiel Pérez Companc has been proclaimed absolute champion of the Silver Cup after beating Simon Gachet and Steven Palette. As a result of the Argentine driver’s performance with the Madpanda Motorsport Mercedes # 90, the Spain-based structure has won the team title. Although they have not achieved the title of resistance, Chris Froggatt and Edward Cheever did claim the absolute title of the Pro-Am Cup. As a result, Tempesta Racing has claimed the absolute team title in the Pro-Am category.

Although the Sprint Cup titles were already settled with the GTWC Europe test in Barcelona in mid-October, It should be remembered that Dries Vanthoor and Charles Weerts were the champions of the Sprint Cup with Audi # 32, handing over the team title to Team WRT. For its part, Simon Gachet and Steven Palette claimed the Silver Cup title for Saintéloc Racing, while Edward Cheever and Chris Froggatt both won the Pro-Am title on his way to repeat his victory in the overall general classification of GTWC Europe. In doing so, Tempesta Racing has also clinched the Sprint Cup Pro-Am team title.