Today we take it for granted that we can access our email from practically anywhere in the world with our mobile. In 1984 that was science fiction, but there were those who certainly tried.

This is what reveals a video on British television that shows one of its journalists trying to connect to your mailbox from a train with an old laptop and a rudimentary modem. That first attempt did not work, but be careful, because it was possible to do something like that from a hotel in Japan, where the line was much more stable and without noise.

A video ahead of its time

That journalist’s attempt to connect to his e-mail box from a train is amazing because in 1984 not many people had a computer and much less had access to an internet he was absolutely in diapers.

Just having email was something completely unusual, so to think that one could check it from a train on a laptop it was an idea that was almost decades ahead of time.

Even so, this journalist explained how to do it: for this, a laptop connected to a modem was enough, or rather, an acoustic coupler that allowed the beeps that were generated in calls to other computers to be “translated” by that coupler, which was then connected (usually via a serial port) to another desktop or laptop computer.

The journalist shows the attempt by making use of a TRS-80 Model 100 by RadioShack, a curious laptop that was launched in 1983 and that had an 8-line monochrome LCD screen that made it look more like a gigantic calculator than anything else.

The acoustic coupler used was a Sendata 700B manufactured by Tandy and had a transmission capacity of 300 bits per second. The journalist first tries to connect from a minicab located on the train (something that was surprising in itself), but the line was too noisy and this prevented a stable connection.

That small failure was almost to be expected, but shortly after the journalist explained how yes it was possible to receive e-mail on his laptop from a hotel, where the phone line was much more stable. 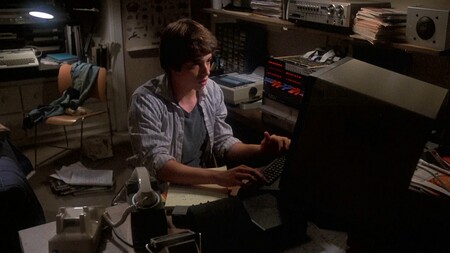 The process is certainly curious and surely I remind you of the one who reflected the mythical movie ‘War Games’ in which Matthew Broderick also used acoustic couplers when he connected to the internet with his no less mythical IMSAI 8080. Good old days?