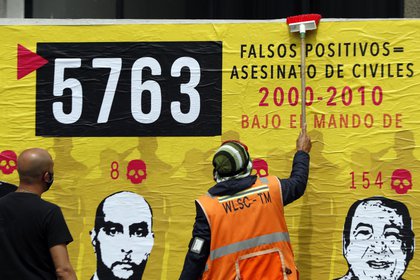 People participate in the elaboration of a mural on false positives, in Bogotá (Colombia). . / Carlos Ortega / Archive

In an interview for the W, Cecilia Arenas, one of the Mothers of Soacha, mentioned that, of the figure revealed by the JEP in which they assured that at least 6,400 civilians were executed by the military in Colombia and presented as killed in combat between 2002 and 2008, which she is sure there were many more and she is not surprised that more figures will be revealed in the coming months and it will be possible to clarify what happened at that time.

“The new numbers of false positives are not strange to us. We are talking about more than 6,400 cases that the JEP uncovered, this is only from the investigation of this justice, and the figure will continue to rise since there are people who have not wanted to report ”, Arenas commented.

In a statement, the JEP explains that there are six territories in general where most of the cases occurred, these are Antioquia, Costa Caribe, Norte de Santander, Huila, Casanare and Meta, however, 66% of the total victims appeared in 10 departments of the 32 that Colombia has.

The Peace Tribunal explained that they will prioritize case 03 by sub-cases and that this seeks to focus the efforts of “Bottom up” to determine responsibility first at the local level, then at the regional level and finally nationally, that is why it begins with the six previously mentioned and then the second phase would come with the events that occurred in the departments of Arauca, Boyacá, Caquetá, Guainía, Guaviare, Sucre and Putumayo. In the first six, there will not be a priority, but rather the investigations will be carried out as the necessary information and resources are accessed.

The JEP seeks that with these new data the corresponding investigations be initiated against false positives and on who gave the order of this genocide, “For us, the JEP has been an incredible support because with ordinary justice we could not open our mouths”, Assured Cecilia Arenas. 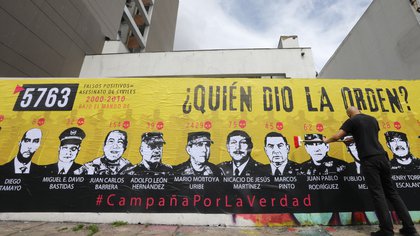 Faced with the statements made by some members of the Democratic Center that the mothers of Soacha only report these cases because they do not agree with the Uribe government, the woman explained in the interview with the W that, “It makes us laugh because we don’t mind being treated crazy, but it’s obvious that they want to cover the sun with a finger. The magnitude is so great that they have not realized it. Now Uribe says that he did not know they were false positives …It does seem threatening to us and we make it clear that if something happens to us it is solely and exclusively from their hand”, He confirmed.

Faced with the sanctions that the authorities have imposed on those responsible for the false positives or those who were implicated in the deaths, he assured that “The penalties they have received are unfair, because they are small. We do not want them to pay a penalty in jail because for them it is a lot of benefit, for us it would be better if they were sent to a common prison, but they are going to send them to one with comfort ”.

False positives in figures, by department:

North of Santander It ranks sixth in the national count of victims, but here 82 percent of the deaths are concentrated between 1999 and 2008, with the majority of cases in El Catatumbo. But the JEP will focus on clarifying what happened in the cases between 2007 and 2008 in this area of ​​the department. The Second Division of the Army would be responsible.

In Huila At least 327 deaths of innocents presented as combatants are reported by the Fifth Division of the Army in the south and center of the department. Pitalito has 29 victims, followed by the municipality of Garzón with 19.

Casanare It was the department with the highest casualty rate in the entire country with 12 cases per 100,000 inhabitants between 2002 and 2008. Here the JEP will prioritize the events that occurred between January 2005 and December 2008. The XVI Brigade is the one indicated in this period.

At Goal Priority will be given to the cases between 2002 and 2005 in which members of the Infantry Battalion no. 21 “Battle Pantano de Vargas” (BIVAR) ”.

The Colombian Foreign Ministry rejects the headline of La Repubblica de Italia on Diana Trujillo and says that it stigmatizes the country Diana Trujillo was the most wanted personality in Colombia in the last 24 hours, according to Google