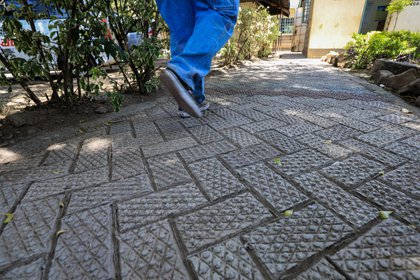 Nairobi, Feb 18 . .- The young Kenyan engineer Nzambi Matee faces every day an omnipresent enemy that is ignored by all: plastic. In his small factory in Nairobi, bits of milk bottles, shampoo and cereal bags are mixed with sand, melted at a high temperature and molded into bricks.
“We were tired (of nothing being done). Plastic waste is not a Kenyan problem but a global one and, if we are not able to offer practical solutions, asking people to adopt a recycling culture can be a challenge,” he explains to . Matee, 29 years old and founder of the company Gjenge Makers, which produces sustainable construction material with plastic waste.
Since its inception in 2017, this entrepreneur and her team – now made up of five part-time workers and another five full-time; with a capacity to produce about 1,500 bricks per day – they have managed to recycle about 20 tons of plastic waste.
In the city of Nairobi alone, it is estimated that around 500 tons are generated every 24 hours.
The initial idea was to collect plastic scraps to sell to local recycling companies, but by accumulating more than they could sell, they decided to try to transform this apparently useless plastic into bricks that are harder than the concrete itself.
“(Our bricks) are three or four times more resistant than concrete because plastic, being a fibrous material, creates fewer air pockets,” says this graduate in Physics and Geophysics, specialized in Materials Sciences.
For her, the ultimate goal is simple: to create a fertile space in which a circular economy around plastic can flourish, just as it already happens with other materials such as iron, whose scrap is almost always reused.
“The circle of metal life is very well established: no waste is seen because it has been given a value. That is my wish and prayer for any other material be it plastic, food waste, etc. that have a value”, details.
“A MORAL PUSH”
Matee was also recognized in mid-December as one of the seven Young Champions of the Earth 2020, an award with which the UN Environment Program (UNEP), based in Nairobi, recognizes the work of organizations, scientists, activists or entrepreneurs – under 30 years old – capable of promoting a transformative impact.
“(These young people) show us that we can all contribute (to eradicate environmental problems) wherever we are and with what we have at hand,” said UNEP Executive Director Inger Andersen, who highlighted the key role of young people in when it comes to offering solutions against the climate crisis, biodiversity loss and pollution.
“This award, of course, has generated publicity and greater interest in our product, but above all, both for my team and for me, it has been a moral boost. That force that gives you someone to tell you: ‘I see what you do, I appreciate it. Keep it up! ‘”exclaims Matee, whose team is working around the clock to pave a block of flats with 14,600 bricks.
According to Greenpeace data, only 9% of all plastic generated globally is recycled, and even in developed countries, the recycling rate of waste collected in homes does not reach 50%.
In addition, and despite the fact that Kenya is recognized around the world for pioneering practices such as the ban on the use of plastic bags in 2017, environmental organizations warn of the negative consequences that a possible agreement with the United States – to import nearly 500 million tons of plastic waste per year – could cause in the African country.
“The (commercial) agreement between the two countries must exclude any importation of plastic waste to East Africa,” Fredrick Njeuh, political advisor to Greenpeace Africa, tells ., and highlights that the Administration of US President Joe Biden has committed, once again, to increase efforts in the fight against climate change.
Matee, like other voices critical of the so-called “old normal” who demand a post-pandemic green recovery – a different normality – believes that this is a good time to press “the pause button.”
“The data reveals that, during the pandemic, people have returned to the basics: to take care of each other and to take care of the environment,” continues the Kenyan engineer.
“It will take time, but this pause and the mental change caused by COVID-19 could be the beginning of a more aware generation,” predicts who, from the busy industrial area of ​​Nairobi, is already leading this change based on bricks.
Patricia Martinez