The Chinese manufacturer has surprised at the 2020 Guangzhou Auto Show with the presentation of an Xpeng P7 equipped with Lamborghini-type vertical opening doors and it is not a simple concept, but a limited edition that will be on sale shortly in China, the new Xpeng P7 Wing Limited Edition.

These days the International Automobile Exhibition or Guangzhou Auto Show 2020 is taking place in Guangzhou, one of the few motor shows that could be held this year. At that event, the new update of the Jeep Compass has just been unveiled, which receives a notable aesthetic facelift for the 2022 model, but also a strange and striking variant of the Xpeng P7 that is characterized by vertical opening doors in the purest Lamborghini style .

Contrary to what it might seem, this strange variant is not an aftermarket modification carried out by a specialized workshop, but a real new version presented by its own manufacturer these days in Guangzhou and that it will be available in the regular catalog of the model. Although we do not have the data regarding its production, in principle it has been presented as a limited edition. 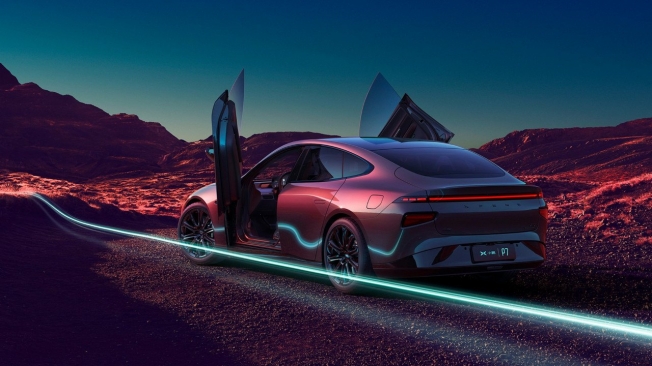 The doors have a radar to avoid knocks.

The new Xpeng P7 Wing Limited Edition really does not differ from the Xpeng P7 that we already knew, because with the doors closed It is indistinguishable from any other variant of the Chinese electric sedan. In addition, it is available in several mechanical versions.

The only novelty is the vertically opening doors, although this system is only available for the two front doors, so the rear ones are still conventional. A very interesting detail is that vertical doors have a radar that it is able to “identify obstacles and control movement during the opening process” to avoid bumps and accidents. A whole novelty for an opening system of this type.

The Xpeng P7 Wing Limited Edition features the same mechanical options as the Super Long Range and Performance versions of the conventional Xpeng P7. If the first rides single 267hp (263hp) engine on rear axle, the second adds a second 163 hp (161 hp) engine to the front axle, so it has all-wheel drive. Both versions have an 80.9 kWh battery pack that allows them to homologate 706 km and 562 km of autonomy according to the NEDC cycle they use in China. These start at 366,900 yuan in that market, about € 47,159 at the current exchange rate.