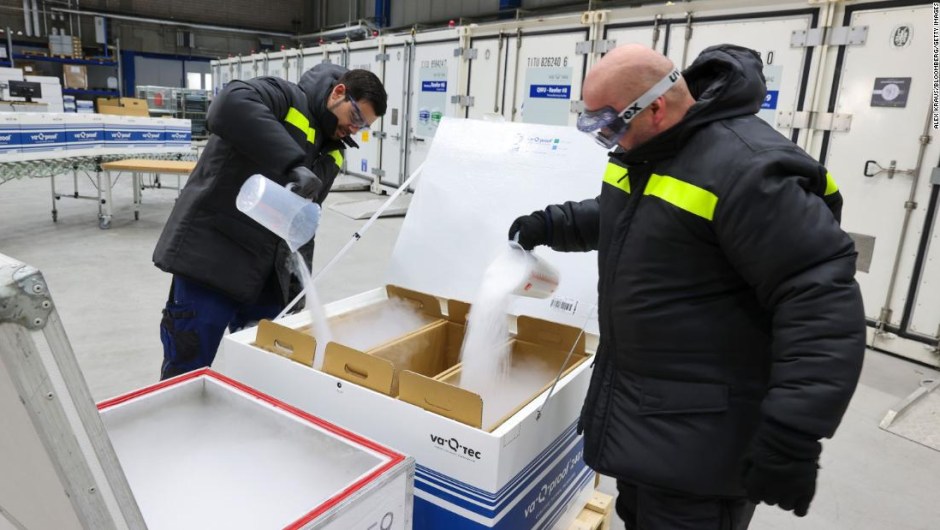 Employees fill a shipping box for clinical and pharmaceutical products with dry ice at the Va-Q-Tec AG factory in Wurzburg, Germany, on November 18.

. – Vaccines need to be kept cold, just look at Pfizer’s option against covid-19, which has to be deep-frozen. And that will be a problem for the developing countries and for the rural areas of the developed countries.

The “cold chain” is just one of the challenges in vaccine distribution around the world.

There are many others: decisions about priority populations and databases to keep track of who received what vaccine, where and when. Furthermore, different vaccines may be more or less effective with different population groups; and governments will need public relations campaigns to persuade people that vaccines are safe.

But the logistics of transporting and storing the vaccines, taking them from the factory gate to the patient’s arm, is essential. And since most vaccines are likely to require two doses, the entire chain of needs must be repeated in a few weeks.

Moderna indicates that its vaccine can be stored in freezers that are normally available in pharmacies and in a refrigerator for 30 days. But fewer doses of Moderna’s vaccine than Pfizer are likely to be available in the next year.

Phase 3 trials have shown both vaccines to be around 95% effective, but the results have not yet been reviewed by regulators.

On Wednesday, the CEO of BioNTech, the German biotech company associated with Pfizer, acknowledged the temperature control problem.

“We are working on a formulation that could allow us to ship the vaccine even at room temperature,” Ugur Sahin told CNN. “We believe that in the second half of 2021 we will have come up with a formulation comparable to any other type of vaccine.”

But in the meantime, US Secretary of Health and Human Services Alex Azar believes Moderna’s option is “more flexible” for settings like a local pharmacist. Pfizer’s, he said Monday, would be better suited for “a large institutional vaccination, let’s say a whole hospital setting, several nursing homes at once.”

Pfizer plans to ship up to 1.3 billion doses next year, which requires a large amount of dry ice (carbon dioxide in solid form at around -78 degrees Celsius) and many insulated boxes. The boxes hold 975 vials (4,875 doses) and can be filled with dry ice for up to 15 days of storage.

Pfizer tests the supply chain in four US states. Its CEO, Albert Bourla, said Wednesday he has “no concerns” about cold chain requirements.

But shipping such a vaccine can pose great challenges. Dr. Jarbas Barbosa, deputy director of the Pan American Health Organization, told CNN that “rural and urban areas of any country in the world are not prepared to administer this vaccine today.”

So who in the world is ready? No one”.

One problem is the availability of dry ice.

The Compressed Gas Association says that carbon dioxide production capacity in the US and Canada is about 30,000 tons per day and is confident that its members can meet the demand for dry ice. It says vaccine supply chain officials believe less than 5% of dry ice production will be needed to support ultra-cold storage of COVID-19 vaccines in the United States and Canada.

Others in the industry predict bottlenecks. Several dry ice producers in the US told CNN that they had already received offers for all of their production. Buddy Collen of Reliant and Pacific Dry Ice told the GasWorld online publication: “We are in a mess trying to manipulate our production plants.”

Sam Rushing, president of Florida-based Advanced Cryogenics, told CNN that there are already regional shortages in the US.

The main problem, Rushing says, is that there are fewer vehicles on the roads during the pandemic, which means less production of ethanol, of which carbon dioxide is a by-product. European ethanol production has also dropped considerably this year.

US officials are confident that enough dry ice will be available. Paul Ostrowski, director of supply, production and distribution for Operation Warp Speed, told CNN last week that the courier UPS had committed to “providing dry ice forwarders throughout the United States upon request.”

But Rushing cautions that dry ice isn’t very easy to use and can be dangerous if stored improperly, especially in a confined space. The Federal Aviation Administration classifies it as dangerous cargo.

Peter Gerber, CEO of Lufthansa Cargo, told CNN that the need for dry ice “clearly also reduces transport capacity because if you have to carry more ice you can’t carry as much vaccine. And of course the procedures have to be very special to ensure that it always has this degree of coldness.

The US courier service DHL will adapt the distribution plans according to the specifications of each vaccine. David Goldberg, CEO of Global Forwarding US for the company, says that “there is a restriction on the amount of dry ice used on an aircraft, typically 500 to 1,000 kilograms, depending on various factors.”

Once they arrive, Pfizer vials can be stored at 2-8 degrees Celsius for up to five days before deteriorating. Pfizer says it has developed a “just-in-time system that will deliver the frozen vials directly to the vaccination site.” It will also monitor the temperature of each box that is shipped.

Julie Swann, a supply chain expert at North Carolina State University, says that large hospital systems, which often have ultra-cold freezers, can play a role as distribution centers. But not all the states of the country have them; Hawaii said last week that none of its hospitals had such freezers.

Breaking down shipments of a frozen vaccine to rural areas or small groups of essential workers, without compromising their temperature, will be another headache, Swann said.

When a vaccine is needed within a few days, providers will need to make sure they are ready. “You can’t wait to see who shows up,” Swann told CNN. “And we still don’t have good data defining where and who the priority populations are.”

The more links in the supply chain, the greater the risk that the temperature of the vaccine will be compromised. Last month, the US Centers for Disease Control and Prevention (CDC) warned states that they “should limit the transportation of frozen or ultra-cold vaccine products.”

Prashant Yadav, a supply chain expert and senior fellow at the Center for Global Development, said: “It’s a question of how soon we can start thinking about multiple packaging formats.”

Beyond the United States

This we know about Chinese vaccines against covid-19 1:27

If getting a frozen vaccine for tens of millions of people is a challenge in the United States, it is a much bigger problem for the poorest countries.

Transport links are slower and medical facilities are less equipped in developing countries. CO2 production is low, and the cost and dangers of shipping large amounts of dry ice are also an obstacle, Yadav says.

David Gitlin, CEO of Carrier Refrigeration Specialists, revealed to CNN last week: “When you look at places like Africa and India, they just don’t have the cold chain infrastructure. The United States spends 300 times more per capita on the cold chain than India.

Peru is one of the many countries that have ordered the Pfizer vaccine. In the capital Lima, where large volumes can be delivered quickly, it should be effective, says Dr. Germán Málaga, a member of the team working on Peru’s vaccine options. But although there are probably 30 ultra-cold freezers in Lima “for the other 20 million Peruvians, including the Andes and the jungle, there are none.”

“For the rest of the country we could use vaccines like the Chinese one that requires 2 to 8 degrees, which is more manageable,” said Malaga.

“It’s about cost-effectiveness, it’s not just about the vaccine, it’s about the entire vaccination process,” Yadav said. But if Pfizer’s candidate turns out to be the most effective, the demand for ultra-cold freezers would be overwhelming.

Barbosa says that the Pan American Health Organization urges member states not to spend large sums on the preparation of a vaccine, but to join a multilateral facility called COVAX, essentially a clearinghouse for the purchase of vaccines administered by the Organization. World Health.

Beyond the cold chain, there are other logistical obstacles.

It will take a massive airlift to get the shots where they need to go. Pfizer, which has production lines in Europe and the US, says it expects an average of 20 cargo flights a day around the world.

DHL expects 15 million cool boxes to be delivered on 15,000 flights over the next two years. David Golberg told CNN that the company has established a high-quality cold chain network and will add flights between China, Europe and the United States.

Many countries can turn to existing programs as models. Peru’s national vaccination program reaches about 75% of its population, Málaga said.

India’s polio vaccination program is ubiquitous: this year it will cover more than 90% of children, according to Gagandeep Kang of the Wellcome Trust Research Laboratory at Christian Medical College in Vellore.

“For polio programs, we have used boats and mules and enterprising health workers,” Kang said. But such programs are designed for less than a tenth of the population, and COVID-19 vaccines will need to target different groups, he explained.

India will need “a series of waves, each targeting a different group as the vaccine becomes available,” he told CNN.

“We will need to look at the performance characteristics of other vaccines and their delivery requirements before deciding what to use,” said Kang, who is also a member of the World Health Organization Global Advisory Committee on Vaccine Safety.

In such a dynamic situation, record keeping becomes critical. Dr Anna Blakney, who is working on a vaccine being developed by Imperial College London, said there is no centralized infrastructure in the US to monitor who gets what and when, which she describes as a “really critical problem.” .

Yadav says that even when the vaccine reaches its destination, there will need to be some flexibility to allow people to receive their second dose at a different location if they wish. And that requires reliable databases.

Barbosa said that beyond the supply chain, governments “must have a good communication strategy to overcome public skepticism and conspiracy theories about vaccines.”

Blakney agrees. “This process [de desarrollo de vacunas] it’s been so fast that it’s no surprise that people are skeptical when reading about the safety and potential side effects, “he said. Blakney is part of an international effort launched by research scientists to reassure people via social media about the safety and efficacy of covid-19 vaccines.

Finding enough dry ice is just one of a sequence of challenges to vaccinating the world against COVID-19.

CNN’s Claudia Rebaza and Fred Pleitgen contributed to this report.