There are tons of horror movies about Christian rites and rituals, but very few that explore Jewish religious traditions, much less thoughtfully and respectfully. Writer / director Keith Thomas takes on this challenge with his feature debut, The Vigil, a relatively straightforward horror film that feels creative and fresh thanks to its foundation in a specific religious tradition. The vigil is not only based on Judaism in general, but also takes place in an insular Jewish community in Borough Park, Brooklyn, where the Orthodox community lives separate from the outside life of the city. In addition to this portrait of an isolated enclave within the city, most of the dialogue in The Vigil is in Yiddish.

The vigil begins not in Borough Park, but elsewhere in New York City, in a kind of support group for Jews who have left the secluded Orthodox community to join the world at large. Yakov Ronen (Dave Davis) continues to adjust to secular life, struggling to find a job and pay the rent. He also suffers from unspecified mental health problems, having spent time in a psychiatric hospital. Yakov is supported by his fellow Orthodox expats, all of whom have gone through the same period of adjustment. He even catches the eye of Sarah (Malky Goldman), an attractive young woman who invites him for coffee and gives him her number. Yakov, who has just learned how to use a mobile phone and is used to strict separation of the sexes, does a Google search for « how to talk to women. »

However, Yakov cannot entirely escape the lure of his old community, and is susceptible to the request of Reb Shulem (Menashe Lustig), a religious leader who cornered Yakov after the meeting. Shulem offers Yakov, with little money, 400 dollars to serve as a shomer, someone who watches over the recently deceased when relatives are not available or unable to do so. So Yakov reluctantly agrees to go back to Borough Park and spend five hours with the body of a Holocaust survivor who just died.

The Eternals will be a unique Marvel movie

It is clear from the beginning that something is wrong in this situation. Shulem tells Yakov that the previous shomer literally fled, and when the two men arrive at the deceased’s house, his widow (Lynn Cohen) insists that they leave immediately. But Yakov needs the money, and Shulem assures him that old Mrs. Litvak suffers from dementia and will simply sleep through the night. Yakov settles to earn his fees inside this creepy house with a corpse and an unstable old woman.

What follows are a bunch of eerie noises and lurking apparitions from horror movies, but Thomas uses them effectively, and The Vigil has built Yakov into a significant enough character to be worth worrying about. Periodically there are flashbacks of a traumatic moment in Yakov’s past that prompted both his departure from Borough Park and his mental breakdown, and Thomas reveals bits of the incident over time, creating suspense but not misleading audiences. Likewise, the nature of the supernatural infestation in the Litvak house becomes clear as the film progresses, thanks to some cryptic words from Mrs. Litvak and a wall of familiar-looking clippings and photos in the basement. 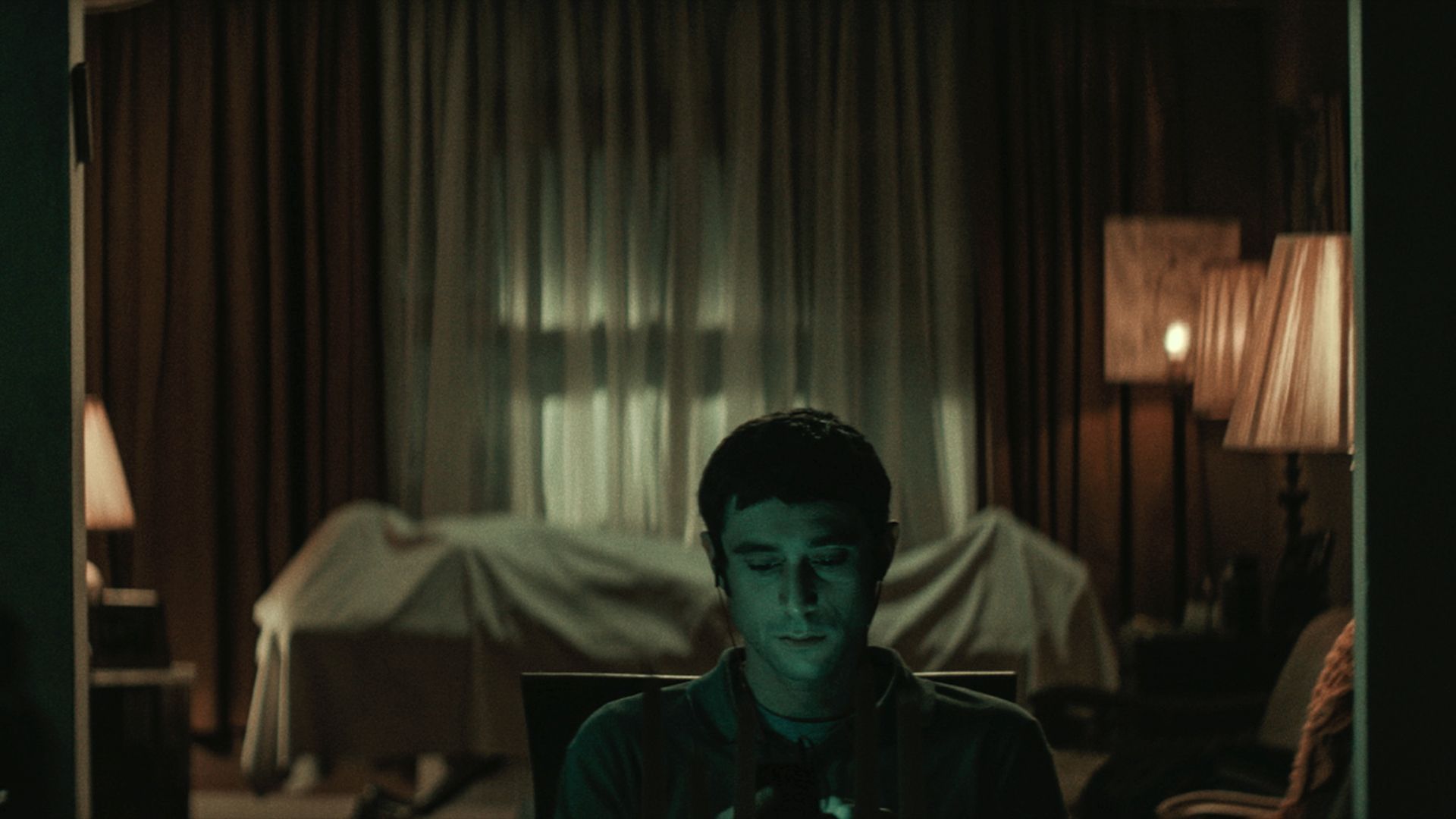 Yakov also ends up watching a literal video explaining the threat he faces, but even this topical part of the exhibition is handled in a creepy and understated way. Most of The Wake takes place within the confines of the house, and Thomas finds creative ways to use the same space with multiple approaches. An especially disturbing moment towards the end of the film is when Yakov simply walks down a hallway, while the walls are filled with demons and the passage seems to have no end.

And while La Vigilia never loses sight of its goal of scaring audiences, it also does not lose sight of its thematic concerns. Yakov’s trauma is directly tied to his struggle with his Jewish identity, and the demon himself could be representative of the unhealthy bonds that prevent him (or anyone trying to get out of a repressive environment) from moving forward in his life. Davis endows the character with a sense of vulnerability and determination that makes his personal journey about more than just defeating a nasty demon. Veteran actor Cohen makes a perfect blend of sinister and kindness as the elderly Mrs. Litvak.

The relatively small production offers only brief glimpses of the demon himself, but enough to make the creature compelling and dangerous. The production design emphasizes the claustrophobic nature of the Litvak’s cramped home, and the photography keeps the images dim, even with the lights on, as if Yakov could never see his way forward. It is a well-known horror material, but Yakov experiences it from his own perspective, and in that sense, the public also.