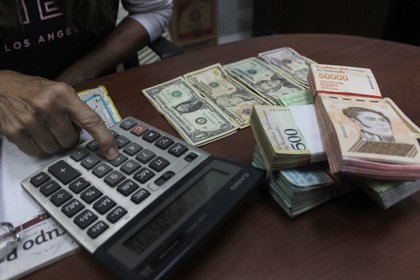 In the parallel market, the dollar was quoted this Friday at 855,478.39 bol vars, a value significantly higher than that reported by the Venezuelan issuer. . / Johnny Parra / Archive

Caracas, Nov 20 . .- The Venezuelan currency, the bolivar, lost 14.75% of its value against the dollar in a week, in which the US currency soared to 782,025.16 bolivars at the end of which it averaged of this Friday, informed the Central Bank of Venezuela.
At the beginning of the week, the US currency was quoted in the official market at 666,713.21 bolivars, a figure that, contrasted with that of this Friday, offers a sample of the high inflation that the South American country is going through.
In the parallel market, in which most of the foreign currency purchase and sale operations in the country take place, the dollar was trading this Friday at 855,478.39 bolivars, a value significantly higher than that reported by the Venezuelan issuer.
Last Wednesday, the price of the dollar in the parallel market for the first time exceeded the barrier of 700,000 bolivars for each unit of the US currency.
The bolivar has undergone two processes of currency reconversion: in 2008, it lost three zeros and was renamed bolívar fuerte, while, in mid-2018, another five zeros were subtracted, which was renamed the sovereign bolivar.
Faced with this instability of the local currency, Venezuela is experiencing a de facto or “spontaneous” dollarization process, with which most of the products offered for sale are calculated in dollars, and there is the possibility of paying in foreign currency or in bolivars.
In these cases, businesses tend to look at the parallel market exchange rate and not the official one.
This type of payment has spread even in the most popular areas, where the calculation of prices is already done in dollars.
Those who wish to pay in bolivars must do so with debit cards, since the banknote with the highest denomination is 50,000, that is, less than 10 cents on the dollar.