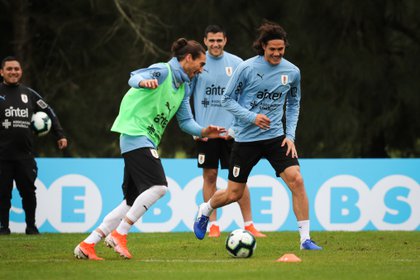 View of a training session for the Uruguay national team at the Celeste Complex. . / Ra l Mart nez / Archive

Montevideo, Nov 20 . .- The Uruguayan Football Association (AUF) was fined this Friday by the Ministry of Public Health (MSP) of that country for failing to comply with the health protocol in the Celeste Complex, place of concentration of the national teams, in which 16 positive cases of covid-19 have been known so far.
This was reported by the minister of that portfolio, Daniel Salinas, through the social network of Twitter in which he detailed that the fine amounts to about 534,000 Uruguayan pesos (about 12,136 dollars).
“MSP fines the AUF 500 Adjustable Units for non-compliance with sanitary protocols in the Celeste Complex. There is a hearing,” he wrote.
The Uruguayan delegation that faced the double date of the South American qualifying rounds of the Qatar 2022 World Cup – for the matches against Colombia and Brazil – has already accumulated 16 positive cases, the most recent known was that of captain Diego Godín.
The first to be known was that of Matías Viña, a player for the Brazilian Palmeiras, a club that has already registered 15 cases in recent days.
Until now, the infected footballers are: Viña, Rodrigo Muñoz, Alexis Rolín, Luis Suárez, Diego Rossi, Darwin Núñez, Lucas Torreira, Gabriel Neves, Brian Rodríguez and Diego Godín.
Of concern, without a doubt, is the figure of Uruguay’s coach, Óscar Washington Tabárez, who is 73 years old and in delicate physical condition.
This Thursday in dialogue with Efe, the president of the AUF, Ignacio Alonso, assured that during the health ‘bubble’ “all precautions” were taken to avoid the coronavirus.
In addition, he said that “due to the sequence of the appearance” of the positive cases, he believes that the contagion occurred in Colombia, where Celeste played the first of the two games.
For its part, the Spanish press picked up the discomfort of the president of Atlético de Madrid, Enrique Cerezo, who stressed that in Uruguay “they have not had control.”
“In Spain there is a control to fulfill. Here the players do not shower in the changing rooms. We control them before and after the game and training. The losers are the clubs,” he said.
The covid-19, which last week forced the postponement of the matches of the day due to the positive of Rodrigo Piñeiro, of the Danubio, and that this Thursday registered two more affected in that team and in the Plaza Colonia it crosses the fifth date of the Tournament Uruguayan intermediate.
The losses due to coronavirus of José Luis Rodríguez and Nicolás Guirín are added to those of the Uruguayan internationals Agustín Oliveros and Gabriel Neves in the Nacional and of Yonatan Irrazábal and Alexis Rolín in the Rentistas.