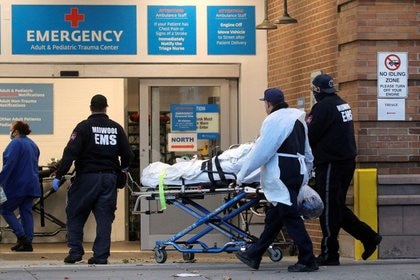 Image of a patient arriving at the Maimonides Medical Center, as the spread of COVID-19 continues, in Brooklyn, New York, United States. November 17, 2020. REUTERS / Brendan McDermid

The United States surpassed 12 million confirmed cases of the SARS-CoV-2 coronavirus this Saturday, six days after reaching 11 million infections. In total, the country registered 12,019,960 infections, and reached the 255,414 deceased for COVID-19 disease, according to the independent count from Johns Hopkins University.

This balance reflects that the pandemic is in an “exponential” phase in the country, according to health authorities.

The United States set an absolute record for new infections on Thursday, with 200,146 more cases than Wednesday and also the highest number of deaths in 24 hours -2,239- since the beginning of May, in full explosion of the pandemic.

The Centers for Disease Control and Prevention (CDC) advised Americans on Thursday to suspend travel for Thanksgiving -the biggest family reunion of the year and in which traffic records are usually broken at airports and highways-, which is held next Thursday.

And across the country, local officials had to impose new restrictions to try to curb the spread of the virus.

Although New York It is no longer the state with the highest number of infections, it is still the most affected in terms of deaths in the United States with 34,252. Several people wait to enter a medical check-up and get a coronavirus test, on April 14, 2020, at the Elmhurst Hospital Center in Queens, in New York (USA). . / Justin Lane / Archive

But there are more than 40 states, Washington DC, Puerto Rico, the Virgin Islands and Guam that showed percentage increases in the new daily cases detected during the last 14 days. From them, a dozen are experiencing an upturn in infections.

Meanwhile, local authorities continue to implement new restrictions, such as Wisconsin Governor Tony Evers, who has just imposed the mandatory use of a mask in public spaces. Several states have also introduced the mandatory mask and have urged their inhabitants not to travel on Thanksgiving. 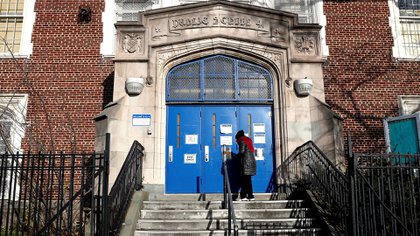 The provisional death toll – 254,297 – far exceeds the lowest level of the initial White House estimates, which projected at best between 100,000 and 240,000 deaths from the pandemic.

The American President, Donald Trump, lowered those estimates and was confident that the final figure would be between 50,000 and 60,000 deaths, although later he predicted up to 110,000 deaths, a number that has also been exceeded.

For its part, the Institute for Health Metrics and Assessments (IHME) of the University of Washington, whose models for predicting the evolution of the pandemic are often set by the White House, calculates that By the end of the year, the United States will reach 320,000 deaths and by March 1, 440,000.

40 million doses by the end of the year

The United States hopes to have 40 million doses of COVID-19 vaccine before the end of the year, the White House press secretary said Friday, Kayleigh McEnany, during a press conference. “Regarding the vaccine, We believe there will be 40 million doses available by the end of the year ”McEnany said at a news conference, the first since Oct. 1.

McEnany recalled the advances experienced by Pfizer and Moderna, who have reported “successful results” in their vaccines: “Each has achieved a vaccine for covid that is around 90% effective. We know that Moderna’s is 94.5% effective and Pfizer’s 95%, this is extraordinary ”, said.

During the press conference, McEnany insisted on attributing the progress in vaccines to the management of outgoing President Donald TrumpDespite the fact that at the beginning of the pandemic, he intentionally underestimated the importance of the disease, which he himself has recognized, so as not to panic among the population, and he refused to wear a mask in public for several months.

With information from ., ., EuropaPress

Second wave of coronavirus in New York: a group of parents filed a lawsuit in court to reopen schools