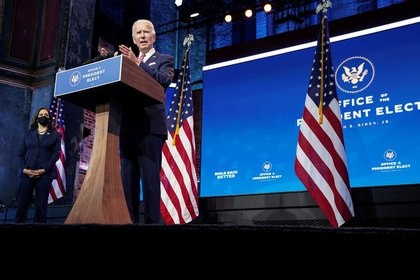 Biden won with 74 million votes, although now I have to endure suspicions of fraud. He expressed the traditional party, clearly benefiting from the anti-Trump wave (this being the true plus winner). Since Trump was winning smoothly before the pandemic, Biden was “chosen” without much enthusiasm to keep “in later careers” more competitive candidates like Michelle Obama, among others. His campaign was neither daring nor capable of generating enthusiasm among young people for his old-fashioned language. He concentrated on one idea: we must remove Donald Trump from the White House, while the Democratic electoral strategy was focused on the states that could give him victory; Biden played his role well and managed to win.

Kamala Harris was faithful to the idea of ​​the American dream; daughter of a mother born in South India, and a Jamaican father. She was the first non-white attorney in San Francisco and the first attorney general in California. Successful inclusion; it dragged the female vote, important in this 21st century, which is probably remembered as the Century of Women.

Trump, still losing, gets 70 million votes, more than the 63 with which he won in 2016. Trump loses a huge flow of female votes for his misogynistic expressions; his position against climate change takes away votes in the young electorate; it ties or slightly wins some votes with African Americans (despite a discriminatory culture installed throughout society) and also with Latinos. It loses positions due to its oscillating, superficial, not very serious and even histrionic manifestations to face the pandemic, which is overflowing because there was no centrally led plan. It is clearly supported by the large amount of employment it generated (economy); for its strong confrontation with China and for its electoral base in the deep interior that reacts against the cosmopolitan culture of the most intellectual sectors and of the artists of the big cities.

Polarization is not something new in American political history; There was always strong dispute between factions of their ruling elites; Just remember the Civil War from 1861 to 65. Trump didn’t invent the rift, but he didn’t stop deepening it. The current polarization led to an unusually high number of votes. 160 million citizens voted; the highest participation since 1900; almost 70% of the standard, when the normal thing for decades is that it does not exceed 50%. These elections in the United States once again showed the notable tendency to error on the part of the main pollsters, something already recurrent. Most of the measurements gave Biden a comfortable victory in the so-called pendular states, that is, undefined; however it was not like that and there was no blue wave. Our thesis of geographic polarization (convergent with Mackinder’s geopolitical thesis) was verified since voters lined the coasts with Democrats and in the center of the country with Republicans. The country was fractured in two conflicting civilizing conceptions; that of the land (continentalism) and that of the sea (Atlanticism), the fictitious division between Democrats and Republicans taking a back seat.

Since the late 1990s, globalist politicians felt omnipotent and in their arrogance they did not become aware of the enormous discontent and strong tensions that were accumulating in broad layers of the population due to the fall in employment and wages, nor did they foresee the growing geopolitical competition China, obsessed with their digital or high tech vision of the virtual world. The development of artificial intelligence and algorithms produced the “dream” of a happy world, more visible in the intellectual, educated and cosmopolitan elites of the big cities. Then the fake news and the “hyperpolarized bubbles” were arriving, which cracked the social and political spaces, destroying the bases of democracy, which can only be sustained in a shared public sphere and in different identities, but fraternal, within the same community. The conflicts that have always existed, were thus strengthened, breaking everything in their path, into thousands of fragments, observable if you look at them in detail.

It is interesting to note that the strong opposition to the “extra-party” Trump came from the intelligence agencies, the Democratic leadership and most of the media considered liberal, which used and abused fake news to link him to Putin / Russia, a demonstration of a growing anti-Russian McCarthyism. These groups, survivors of the currents from the Cold War era and ascribed to the globalizing ideological currents, further motivated the Trumpist electoral bases, since they attribute a large part of their domestic problems to the lack of control of the globalized virtual economy to the detriment of the real economy. The latest electoral censorship that even the president of the United States suffered in recent weeks by social networks (Twitter, Facebook), have helped to clarify that they are attributed the super-power to manipulate public opinion and eliminate any dissent, if necessary. Those few technology companies consider themselves the center of the new world order, and seek to continually increase their dominance “by resetting the distribution of global power”, and with the help of the pandemics, hastening, without social responsibilities, “the fourth industrial revolution”, trying to balkanize to nation states.

Future scenarios. Biden You must handle a complex transition in an unpredictable world. It has several challenges: unite the country, contain the pandemic, manage the ongoing economic crisis, increase the demand for employment, retake Obama’s progressive agenda, balance the social demands of his left wing (Bernie Sanders, Alexandra Ocasio Cortez) with the always unpopular increases in taxes, or the demands of climate change (Green New Deal) with the business lobbies of traditional energy. Republicans won’t make your life too easy, if they keep dominance over the Senate; and all will have in view the next elections of 2022. Trump will not remain separated in a prudent cone of silence since the 70 million votes obtained express a very active and firm culture in the USA, which any leadership (whether Trump or another) will try not to scatter.

After decades of US engagement and cooperation with China during the Clinton and Obama days, China clearly came out ahead. Moving away from Deng Xiaoping’s low-key doctrine, since Xi Jinping’s leadership, China has become aggressive in foreign policy. Since that has become clear to most Americans, Biden will not be able to repeat the strategic mistakes of Obama and Clinton (both carried away by the globalist ideology, initiated by the Bushes). It is no coincidence that Bush was the only Republican to congratulate Biden on his electoral victory for now. Nine years ago, during a stay in Beijing, Biden said that “China’s rise is positive for China, but also for the US and the world order,” while currently he has assured that Xi Jinping has the attitudes of an international “bully”. in reference to Taiwan and Hong Kong. We will see that it will be able to offer Biden to its Asian allies (Japan, South Korea and Taiwan), without compromising American finances, since increasing Chinese advances are expected, including through the use of military forces in the disputed South China Sea. Let us remember that during the Obama period, the USA invested numerous resources to develop its “turn to the Pacific”, a demonstration of military forces that produced little practical effect.

Nor will Biden be able to modify the “Buy American products”, imposed by the Trump doctrine, too much, so that his proposal to open markets and better relations with China will meet with enough limitations; the high mutual tariffs between the US and China will continue for the time being. Perhaps it will try to make agreements with China, dividing up global zones of influence, which will not be good news for the rest of the world. The WTO will be a space where some issues will be settled, in relation to a more equitable commercial exchange, the theft of intellectual property, and environmental degradation. Not much progress is expected. Another question is what Biden will be able to do in relation to the doctrine of human rights in China, particularly with Hong Kong, and the persecution of the Tibetans (Dalai Lama) and Uighur Muslims in the Xinjiang province.

In Latin America and the Caribbean, it will continue to be in contact with China, which will continue to expand its influence in the region, based on its financing offers for public works and the generation of companies to supply its internal food or energy needs.

Israel, with Benjamin Netanyahu and Brazil with Jair Bolsonaro, may be the leaders who will most feel the absence of Trump, due to their evident personal alignment. However, Biden has always been comfortable with the traditional pro-Israel establishment in Washington, so there will be no substantial changes in the Middle East, nor will he alter Trump’s decision to move the embassy to Jerusalem. Nor will the US modify relations with the important Brazil too much, because it still belongs to the BRICS group and can also be useful for negotiations with the Venezuelan regime. Geopolitical pragmatism, based on national interests and not ideologies.

During the last two decades, China became the world’s leading economy, measured by its purchasing parity, and in its latest Five-Year Plan, it emphasizes internal consumption and technological self-sufficiency to shield itself from internal competencies. For each computing and communications platform in the USA, China has developed its own: Google-Baidu, GPS-Beidu, Facebook-Renren, Whatsapp-Wechat, Amazon-Alibaba, Twitter-Weibo, Instagram-Tik-Tok. This clearly shows that, regardless of the “Twitter character Trump”, the future will be more related to geopolitics than geo-economics. The current of “national interests” will prevail over the interests of financial globalists. Although there are changes towards more “moderate, academic or predictable” forms, the strong competition, on all fronts, between China and the USA will be inevitable, with the presence of Russia, of less economic and technological importance, but of undoubted strategic importance, for being located in the middle of the Eurasian island and because of its nuclear character.

With the internal breakdown, the US is left with a certain strategic weakness, losing its peer primacy, which will further encourage China and Russia. Democracies with internal rift situations become less competitive in the face of authoritarian regimes, with more resolute conducts. Due to the weaknesses of the USA, the Chinese have begun to cross the lines of North American power, constituting in the global geopolitical environment, an attractive economic and technological competitor for many nations of the world, particularly the less developed ones, including the software of their authoritarian way of conducting. social and political (Chinese model of development). The US, complicated in its internal labyrinth, may cease to be attractive, as a dynamic and open nation, since, like Europe, it will suffer the serious consequences of economic unemployment due to the pandemic, with consequences of very high unemployment, (more among young people) , many bankruptcies and state debts (equal to the level of the end of WWII); all circumstances where any desperate, insecure, unemployed, or bankrupt population can be vulnerable to undemocratic projects.

The Venezuela of the casino, the still lifes and the lights in Miraflores contrasts with the one that is dying between misery and the disaster of the rains

Retirements and pensions will have an increase of 5% in December