This sunday still echoes of Novak Djokovic’s defeat against Pablo Carreño in the tennis consolation final.

More than defeat, what is talked about is the behavior of the Serbian, who showed his anger by throwing a racket to the stands and smashing another with blows.

Novak Djokovic’s racket, thrown into the stands in his match against Pablo Carreño

Well, in the last few hours we have seen another athlete lose his papers, but in this case in a big way.

Its about French boxer Mourad Aliev, who was disqualified from his super heavyweight quarterfinal bout for headbutting his rival.

The referees understood that the action was voluntary and stopped the fight, decision that provoked the ire of the French fighter.

In a display of lack of self-control, Aliev first spat out the mouthguard, then continued to spit left and right as he cut the sleeves.. All this after hitting the camera. 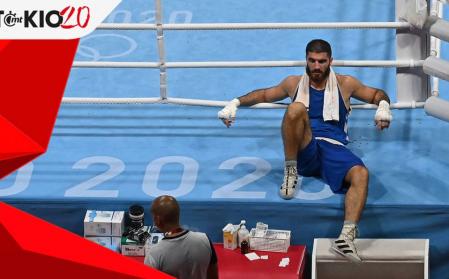 To finish the job, the fighter decided to sit for about an hour in the ring, preventing the day from continuing normally.

“This was my way of showing that the decision was so unfair. I trained all my life for this, and I came here, and by decision of a referee, I lost. It’s over“, was justified after finally leaving the ring.

For his part, his rival, Frazer Clarke did not want to make blood and tried to take away the iron from the matter. “I have noticed two head butts, what I do not know is if they were intentional or not. I know it’s difficult for him, but I’ve been there, and the best I can do is calm down and go back to the locker room. I know him, he is a good person and he will become a champion“he commented.