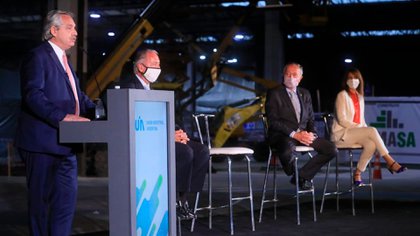 Alberto Fernández, speaking at a UIA event. Now the factory headquarters wants you to listen

Already published in the Official Gazette the government measures that extended the prohibition of dismissals for 90 days and until the end of the year the double compensation, with a ceiling of $ 500,000 to not benefit management positions, the Argentine Industrial Union (UIA) warned today that official decisions “go to the detriment of the necessary expansion of workers’ endowments with a view to promoting economic growth and impact on the objective of formalization.”

In addition, the manufacturing plant sent a letter to President Alberto Fernández in which it indicates that although formal employment in the industry grew last October for the fifth consecutive month and records 4,500 more jobs than in the pre-ndemic stage, from 2013 to date factory employment contracted by 178,000 jobs and in the economy as a whole by 321,000 jobs and that “the increase in informality has reduced the competitiveness of the registered economy, increased unfair competition and made it impossible to consolidate the generation of decent employment” .

To overcome these limitations and consolidate the recovery, says the letter, it is necessary “an industrial policy that incorporates the productivity agenda” and “a regulatory framework that gives credibility and predictability to new hires and responds to the challenges of employability of this stage”.

The UIA reminds the president that “the conditions of exception that motivated the measures adopted last year to regulate the labor market and mitigate the effects of the crisis are no longer in force” and denounces that “the triple constraint that the extension of the the scheme of prohibition of dismissals and suspensions added to the double indemnification pose a scenario of uncertainty about the regulatory framework that will govern new hires ”.

These are situations, says the letter that “block the recovery of industrial employment and the genuine recovery of the formal labor market, especially harming sectors that have the potential to demand new jobs but do not find the certainty to do so.”