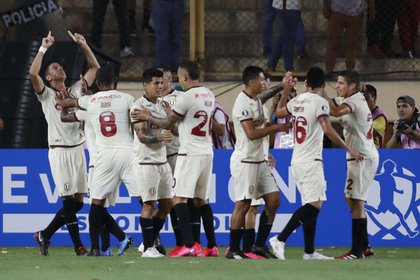 In the image, a record of another celebration of the players of the Sports University. . / Paolo Aguilar / Archive

Lima, Nov 21 . .- The return of Uruguayan gunner Jonathan Dos Santos, who scored a goal during this day, allowed the Sports University to draw 2-2 with the leader Sporting Cristal and keep all his options to play the final for the Peruvian League 1 title this year.
After being absent for a month due to injury, Dos Santos was able to play again during the seventh match and contributed a goal in the draw with Sporting, while defender Aldo Corzo scored the other for the popular cream team.
Cristal’s goals were won by Argentine Horacio Calcaterra and national Percy Liza.
With this result, the celestial team remained in the lead of Group A, which comfortably leads with 19 units, and also of the accumulated table of the year, in which it has 52 points, two more than U.
However, this team can advance directly towards the end of the year by winning the Apertura tournament title and staying in second overall position, thanks also to the 0-1 loss suffered by César Vallejo against Deportivo Municipal.
The municipal team’s victory was scored by striker Andy Pando in the last minutes of the game and snatched from Vallejo, led by José ‘Chemo’ del Solar, the possibility of advancing to second overall by better goal difference.
Now the U depends entirely on the results it obtains in the two remaining games of the second half of League 1 to ensure the title of the year dispute.
The reverse of the medal was shown by Llacuabamba, which confirmed a short-lived passage through the national first division by becoming the first team to lose the category, after being overwhelmed 0-6 by Melgar and remaining with only 18 points during the year.
The goals of the red and black team were scored by the Argentine Emanuel Amoroso and Johnny Vidales, twice each, and the others by Irven Ávila and by the Mexican Othoniel Arce.
The seventh day was not good either for the popular Alianza Lima, which maintained the bad results of the year and could not escape the threat of relegation after losing 2-0 to Sport Boys, for which Argentine Sebastián scored on both occasions. Penco.
In Group B, which leads Vallejo with 14 points, Ayacucho maintained its great performance of the year by beating Cusco 3-1, with two goals from Mauricio Montes and the other from Carlos Olascuaga, which was very close to qualify for an international tournament.