No matter the decade, us hardcore fashion enthusiasts are familiar with one saying: any drama surrounding the latest trends is always good drama. Ryan Murphy is especially aware of this mantra, as his new Netflix miniseries Halston follows the rise and fall of the legendary 1970s fashion designer Roy Halston.

Aside from creating some fabulous statement pieces over the years, Halston was also famous for a fateful night in November 1973: The Battle of Versailles. Before you ask whether it was a war you might not have paid attention to in your high school history class… it kinda was. Pitting high-profile French designers against luxury American designers, it was a campaign to see who could best capture the scope of world fashion, and who would be remembered for it.

TL: DR — it was a night full of breathtaking pieces of clothing, with tons of historic moments to boot. Here’s a little breakdown of the night and how it forever changed the way consumers look at fashion.

How did the Battle of Versailles come about?

Thank famed American publicist Eleanor Lambert for this one. Known for creating a little event called New York Fashion Week (!!!), she and Palace of Versailles curator Gerald Van der Kemp came up with an idea that would not only promote restoration for the quickly dilapidating French landmark (I mean, it was built three centuries earlier), but also bring together some of the most iconic names in fashion.

The result: a night where famous designers from the US and France went against each other, displaying their craft with eight pieces each, while also raising money. Oh, and there would be a performance segment involved, showing the crème de la crème of entertainment from Europe and the United States.

It was a brilliant idea. Now all it needed was a famous host (French socialite Marie-Hélène de Rothschild took on that role) and some fashion icons …

(from L to R) French socialite Marie-Hélène de Rothschild and Princess Grace Kelly of Monaco attend the Battle of Versailles.

Who were the designers featured?

Glad you asked. The way the fashion show worked was like this. Five French designers and five American designers would have their clothes featured on the runway, and let me tell you — the names were as iconic then as they are today.

Here were the French designers:

And here were the American ones:

Despite all the cache each name brought, there were some hiccups between the two camps. As fashion critic Robin Givhan told Harper’s Bazaar in 2015, the French clearly thought they were superior in their game, because the Americans basically paid to use their clothing for inspiration.

“It wasn’t secret, it wasn’t on the fly,” she told the publication. “It was done in a way that was completely condoned by the French fashion industry. American companies paid a fee for the right to copy French designers. [So] for five American designers to be invited to show on a stage alongside the French was really remarkable. ”

Who attended the Battle of Versailles?

With the soiree intending to raise lots of money, it was key that there were some big name guests involved. Some of the attendees included royalty (Princess Grace of Monaco being one), artists (ever heard of a guy named Andy Warhol?), And famous actresses in both the US (Liza Minelli, a personal friend to Halston) and France (Joséphine Baker ). 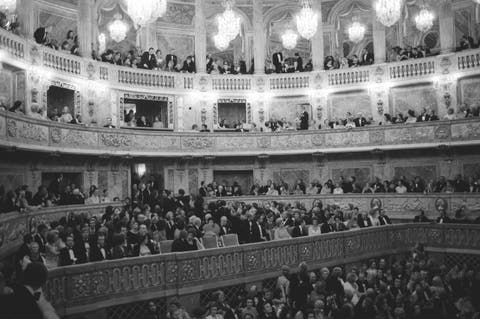 Minelli in particular was influential to the American portion of the event, as she brought with her the energy of modern American theater. Unlike the French, whose performance was deeply rooted in tradition and had a lot going on onstage, the American performance was pretty bare bones and relied on the performers to spur the audience along.

There was some sense in including Minelli, as she was still riding the high of her Oscar win for Cabaret. Who wouldn’t want an Academy Award winner to run the show?

Liza Minelli performing at the Battle of Versailles. 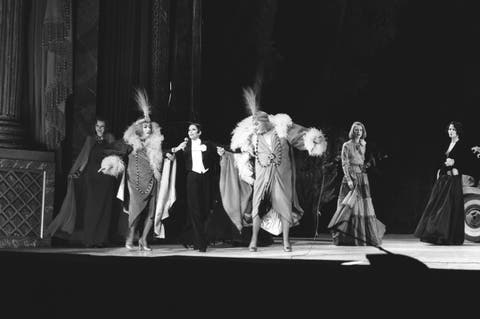 The Americans also made history that night.

There was a deliberate point to break some fashion glass ceilings by including eleven Black models in the lineup. During an era where the fashion houses (which were mostly made up of white men) determined who would walk the runways, having diversity on stage shed light on an element of fashion that hadn’t been explored until that point.

The Americans also brought along with them something we’re all accustomed to when watching a fashion video on YouTube: music. Yes — you read it right. While accompanying music was not usually a thing at these kinds of events (Harper’s Bazaar wrote Balenciaga reportedly liked silence at his shows!), The US portion of Battle of Versailles used music to drive the performance, especially with Americans becoming comfortable with self-expression .

Final question: Who won the Battle of Versailles?

That’s for you to decide, because I can’t dictate your fashion tastes! I will say this: Both sides brought tons of flair to their performances, and lots of time and effort were put into the event. And in some ways, the battle between American and French fashion is still going on.

Want to catch yourself up on all things Netflix? We know you do. You can find all of our entertainment coverage here.