The satanic sect led by Dracula offers him a wife and the past returns to his mind. Meanwhile, enemies swirl against the prince of darkness

Volume 7 of The Tomb of Dracula, the legendary series visits uncomfortable spaces for the time such as Satanism and sacrifices. And incidentally brings together the great enemies of the vampire, and those of Blade. Deacon Frost returns to fight a battle where Marvel’s most popular undead detective will be joined: Hannibal King.

Dracula was the leader of a satanic sect and its processes end up creating some doubts regarding his plans, and humanity, while a dissident with a desire for power already appears within the same organization. But the past never leaves the vampire alone, and his return is always a certainty, his enemies are reunited, but that does not mean that they are allies with each other. The vampire slayer Blade, Drake and Van Helsing, Hannibal King, are united by circumstance, but Deacon Frost, the vampire guilty of Blade’s condition, is not. Dracula’s plans always advance, although he is defeated in battles, the great war against the vampire never ends.

Inside the tome, there is a story that stands out, from the imagination of Wolfman and Colan, to the imagination of the reader, from the imagination of classical authors to paper. THE definitive confrontation between Dracula and other famous literary figures, a fight between what is real on paper, the vampire, and what is fantasy on paper within paper. A story that presents a metalanguage that had been used on occasion, but that here, despite being a specific moment in the series, reveals what the characters of classical literature could offer. And that much later, Alan Moore used in his League of Extraordinary Knights.

Other exceptional guests are Daimon Hellstrom and his father, Satan, the original devil. IN Marvel the concept of the original fallen angel did not exist, with a Mephisto who acted as a Devil, as a tempter, but with a non-religious character, just as the gods were extraterrestrial, Mephisto was a demon from a dimension parallel to ours, but He had no relationship with God. But Hellstorm introduced that vision of religion, although it is true that it included the tradition of being a dimensional being of Mephisto, it intended to give rise to the use of Christian metaphors. The character didn’t get the popularity to last, but even to this day he’s still interesting, enough even to have a TV series.

Marv Wolfman continues with his idea of ​​maintaining the general plan of Dracula, who regains his power, and seeks to establish a base for his power. The great literary chapter joins a power struggle in the sect led by the vampire and between the “heroes”, accentuating the drama and power. The writer knows how to handle the plots to change quickly before anyone gets used to what comes next, creating that attraction on the vampire and creating the same uneasiness that hunters suffer. Wolfman thus left an almost literary work that encouraged the reader to continue forever.

If the text was a great moment for the comic, Colan’s art was on top, creating pages that are remembered by all his readers. His handling of the shadows, able to unite the blacks with the drawings, Colan with Palmer created a work of terror in which the darkness leads the protagonist, who is a villain, and who lurks on every page that the “heroes” star, who always live under threat from Dracula, who lives in that darkness, and could arise at any moment.

There is not much left to finish the series, three volumes, and little by little we see Dracula evolving, feelings and memories begin to weaken his strength, but not even so his enemies can defeat him. The Tomb of Dracula continues on its way, overwhelming the good guys, and leaving the path more and more free for the protagonist and villain of the play. 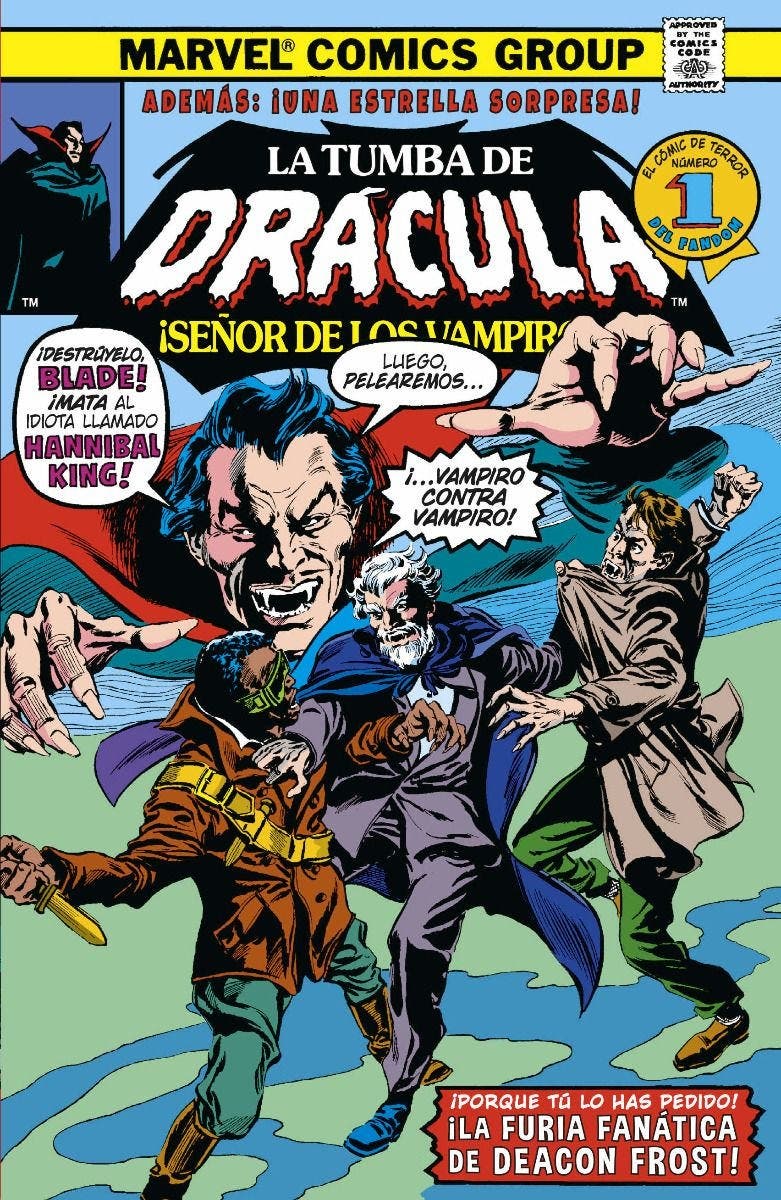 Description : The most demanded story of all arrives: Blade, the vampire hunter, against Hannibal King, the vampire detective, while the arrival of Deacon Frost occurs. Also: Dracula’s unholy marriage. What unholy creature is willing to prevent it from taking place? Next: Robin Hood, Frankenstein and D’Artagnan in the adventure you could not imagine reading. And last but not least, this volume also includes the meeting of the Lord of the Vampires with Silver Stela.