The first shipment of units of the new Tesla Model 3 2021 or “Refresh” in its Standard Range Plus version has just arrived in Europe from the Tesla factory in China. Curiously, the arrival of these theoretically cheaper units has coincided with an increase in the price of this version in the brand’s configurator, which now starts at € 51,000, including the AutoPilot system.

The new Tesla Model 3 2021 or “Refresh”, which is how some US media have baptized it, has been the subject of numerous news in recent weeks due to the large number of news that this update of the electric sedan premieres. The latest one is the arrival in Europe of the first units assembled in China of this new configuration of the model and that debut the new cobalt-free LFP (lithium-ferrophosphate) batteries from the Chinese manufacturer CATL, much faster to charge but also cheaper to produce than Panasonic and LG Chem batteries mounted on other Model 3 configurations.

What together with its manufacture in China can only be to assume one thing, that the units from the Shanghai factory are cheaper to produce than those from the Fremont plant. However, the arrival of these first specimens to Europe has coincided with a small price adjustment for the Tesla Model 3 in all its versions, which in the case of the most basic version represents an increase of € 2,000. The biggest rise in this new price change. 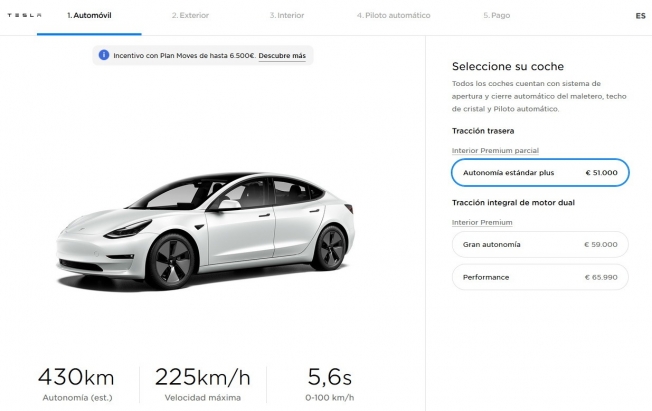 Screenshot of the Tesla configurator in Spain.

Last summer the prices of the Model 3 range were modified on the occasion of the arrival of the MOVES 2020 Plan, a series of direct aid measures for the purchase of new cars. Rate that was not altered after the premiere of the new Tesla Model 3 2021 in the brand’s configurator, which since last July started from € 49,000 for the Standard Range Plus version. The units arrived precisely from China correspond to this version, which for a few days it has been showing a price of € 51,000 on the brand’s website.

The prices of the other versions have also risen, although only slightly. In the case of the Tesla Model 3 Long Range or Great Autonomy, its price including the AutoPilot system has gone from the € 58,700 announced in July to € 59,000 round, while the Tesla Model 3 Performance goes from € 65,300 to € 65,990. So the only version that has undergone a notable increase has been precisely the most basic.

At the moment we do not know the quota of units assigned to our market of this first shipment of the Model 3 Standard Range Plus arriving from Shanghai, but from now on, This Chinese factory will be in charge of supplying the European market. In addition to the new cobalt-free LFP batteries that are currently exclusive to this version, the Model 3 2021 or “Refresh” has a large number of new features both in terms of aesthetics and equipment. On the outside we find new models of rims, absence of chrome and electric boot opening system. Inside the new system wireless charging for smartphones, new central console with armrests and trunk, elimination of piano black finishes and in the case of the Long Range versions we now find new 82 kWh batteries with autonomies of 580 km and 560 km in the case of the Model 3 Long Range and Model 3 Performance, respectively.

Prices valid from November / 2020 without including discounts or other promotions.