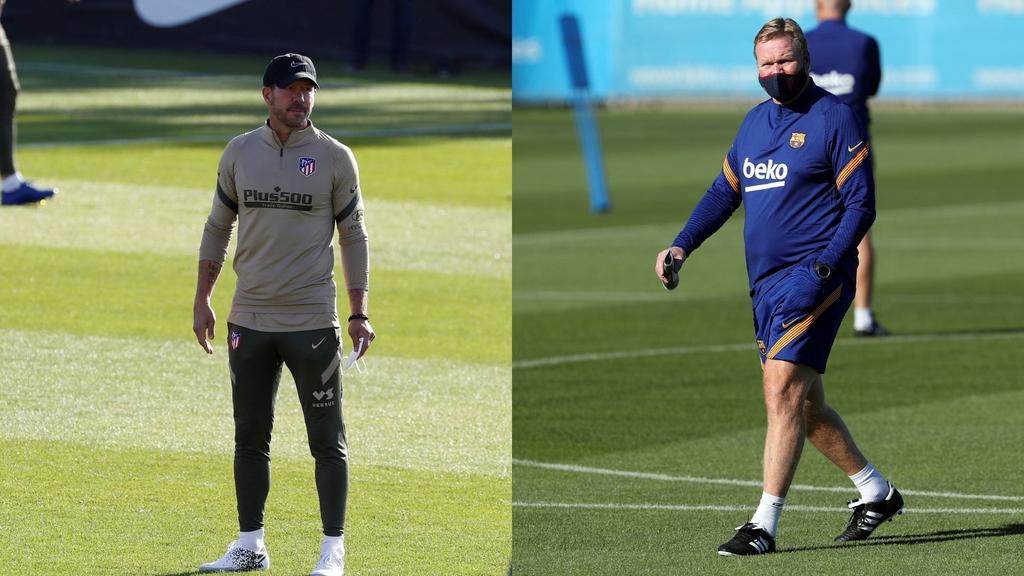 Now reference coaches, Diego Simeone and Ronald Koeman debut this Saturday a confrontation on the bench that commemorates the 90s, when the Argentine, at Atlético de Madrid or Sevilla, and the Dutch, at Barcelona, ​​competed on him terrain up to four times, with a tight and favorable balance for the former Barça player: 2 to 1, in addition to a draw.

Koeman, the ‘Hero of Wembley’ for that free-kick that gave Barcelona the first European Cup on May 20, 1992 against Sampdoria (1-0) in the mythical English stadium, arrived from PSV to Barcelona in January 1989. Defense, but also a midfielder, won four Leagues and a Copa del Rey for Barça until his goodbye at the end of the 1994-95 season, heading to Feyenoord in his country.

Simeone, seven years younger than Koeman – he is 50 and the Dutchman is currently 57 -, emerged in the Spanish League in 1992, hired by his compatriot Carlos Bilardo’s Sevilla from Italian Pisa. Luis Aragonés also directed him at the Andalusian club, where he played from 1992 to 1994. “When we were in Seville, the possibility of coming to Atlético appeared, I spoke with him in his office. ‘Luis, there is this possibility’ and he answered me : ‘and what are you waiting to go’ “, said the Argentine. He signed for Atlético … And he made history: ‘double’ in the League and Cup in 1995-96.

Four times Koeman and Simeone met on the pitch in Spain. Two with the Argentine at Sevilla. The two were in 1993-94, with a goalless draw at Ramón Sánchez Pizjuán and the Dutchman’s victory at the Camp Nou 5-2, although the defender started as a substitute. Yes, the international ‘albiceleste’ was a starter in both.

And two with Atlético de Madrid. One was in La Liga, in the 1994-95 academic year, Koeman’s last at Barcelona. On October 8, 1994 at the Camp Nou, with the Dutchman in the center of the Barça defense, along with Ferrer, Abelardo and Sergi, and with the Argentine in the rojiblanco midfield, along with Caminero, Vizcaíno and Pirri, Barcelona he won 4-3 in a fast-paced match between the two.

Barcelona beat Atlético. And Koeman beat Simeone. They had held a cross-talk before the match, following a harsh entry by the Dutchman on Gustavo Poyet in Zaragoza-Barcelona the previous day that did not mean his expulsion, as the Argentine player had criticized. “The large number of cards that they showed him last season does not make him, precisely, the most suitable to talk about sportsmanship,” Koeman answered Simeone on the eve of that meeting.

The other duel between the two with the two on the field, on February 7, 1995, was won by Simeone. It was also at the Camp Nou, but in the Copa del Rey. The result, in the round of 16, was resounding: 1-4. And that Cruyff’s Barcelona scored first, through a header from Abelardo. Also, in just two minutes.

The 1-1 was contributed by Simeone, by transforming a penalty at the quarter hour of the match, which also meant the expulsion with a direct red from Julen Lopetegui, today Sevilla coach and then Barcelona goalkeeper, after knocking down Caminero in the individual duel within of the area between the goalkeeper and the midfielder.

The effect of numerical superiority was transcendent, but not immediate. At half-time, Jorge D’Alessandro, the rojiblanco coach at that appointment, gave entry to Colombian striker Adolfo ‘Tren Valencia’ through the side Delfí Geli. In the 53rd minute he scored the 1-2, after dribbling Angoy. Then, Pirri Mori made it 1-3 in 69 and finally, again Valencia, already in 89, finished the win.

It was Koeman’s last year at Barcelona, ​​which in 1989, when he signed for the Barça club, was also wanted by Atlético. Could you play rojiblanco? The chronicles of the time speak of such a possibility, at least some contact so that this could have been the case, but always as an option much more distant than close.

The defender, for example, admitted in 1988 a conversation between his father, Martin Koeman, then Groningen coach, and Jesús Gil, the then president of the rojiblanco club, when the two teams met in the UEFA Cup. “Since then we have not heard from him again,” Ronald Koeman himself later said.

“If I come to Spain I will go to Real Madrid or Barcelona, ​​since Atlético de Madrid is ruled out,” he later advanced, already in December of that same year, when he landed in Barcelona to receive the award ‘for the best athlete in the European Community ‘which was then delivered by the weekly’ Don Balon ‘. A month later his signing for Barcelona was finalized. 31 years later he directs it from the bench.