Home>Tech>The story of Argos, the dog that waited for 20 years for its owner to return to die

After a long bumpy journey, the only being in the world who recognized Odysseus when he returned home was Argos, his faithful dog.

Returning from a decades-long journey, it was not his wife who recognized him. Between crowd of anonymous people, a hero was returning home. Ithaca, however, took heed ignored an old man, dwindled after one of the most important wars in Ancient Greece. Only Argos, his dog, knew who it was: Odysseus had come home.

Out of the great heroes of greek mythologyUlysses – or Odysseus, as he is referred to in the epic that received his name – stood out for his intelligence. Thanks to his ingenious warfare tactics, he led the Achaeans to victory at Troy, with the mythical battle they won with the horse loaded with greek soldiers.

After years of participating in this warlike conflict, the Odyssey recounts the hero’s return journey home. He faced mermaids, unforgiving storms, and witches that turned his whole crew in pigs. Odysseus managed to fight all these battles with cunning, until finally – according to Homer’s poem – he came to Ithaca: his homeland.

Odysseus arrived old and tired. The gray hair filled his face and skull. The skin on his body was no longer smooth, as when set out on the journey to fight in Troy. On the contrary, the years and the war had cost him high bills. Ten years in battle; another ten to go home.

Argos: the only being who recognized Odysseus 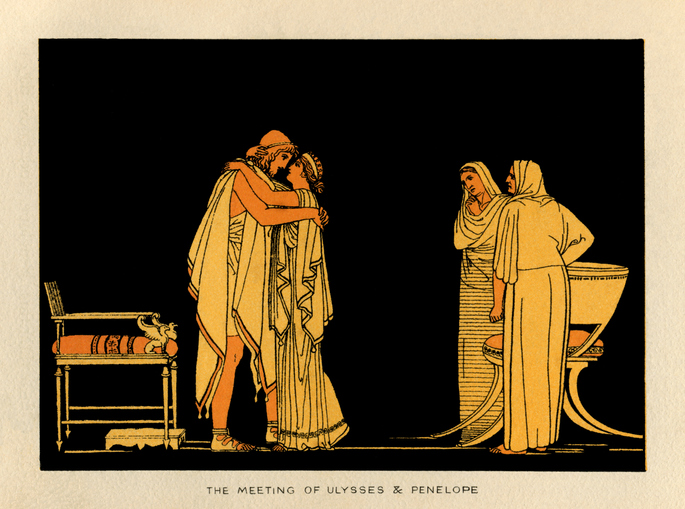 The reunion between Ulises and Penelope. From “Homer’s Stories” by the Rev. Alfred J. Church, MA .; illustrations of designs by John Flaxman. Published by Seeley, Jackson and Halliday, London (1878). Photo: Getty Images

Returning to Ithaca, Odysseus was afraid that his enemies would recognize him. For this reason, invoked the power of Athena – the goddess of wisdom, of whom he had wide sympathy – so that veil his features and dress him as a beggar. Not even his wife recognized him when they returned.

The only being on the whole island who recognized the hero was his dog: Argus. Seeing him arrive, neglected, dusty and old after two decades of not seeing him, the animal he crawled as best he could to his master’s feet. When she turned her eyes to greet him, she laboriously wagged her tail, to indicate that knew perfectly who it was – and that she was glad to see him again.

However, Odysseus could not help disguise his role as a beggar. For this reason, he turned to see him out of the corner of his eye and, although he knew it was his dog, he could not greet him. The hero only spilled a tear and went on his way. Argos died after that, at the feet of his master, as a symbol of absolute loyalty.