The British firm has presented a striking style exercise, whose sole function is to explore new alternatives for the design and distribution of the interior of future electric vehicles. The MINI Vision Urbanaut was born as a virtual prototype that tries to inspire the models of the British brand of tomorrow.

MINI has presented an attractive and peculiar prototype, the new MINI Vision Urbanaut, whose sole purpose is to explore a totally new concept in the design, distribution and use of the interior of vehicles, offering the user a cabin with a level of modularity more typical of a caravan than a compact model, since its interior it basically becomes a living room.

Virtually all hobbyists like virtual projects like this one, where designers have free rein to capture everything they want or are capable of imagining without the limits inherent to conventional street vehicles. In this way, they can dare with shapes, materials and even propose new uses without having to worry about how to translate it into reality later. The new MINI Vision Urbanaut is precisely one of the most extreme cases, as it has been completely developed around a single concept without any physical or economic limitation. 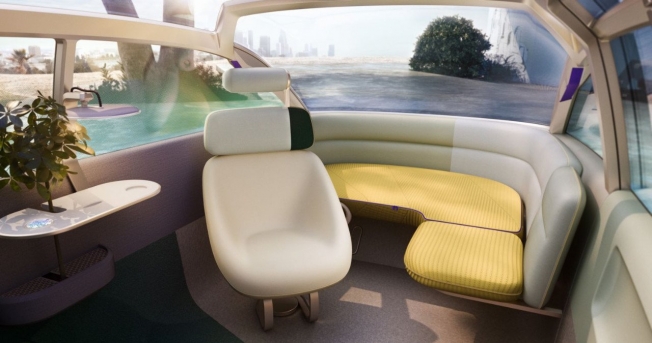 The new MINI Vision Urbanaut is truly the container to showcase the new interior concept devised and developed by MINI designers. In fact, in all the graphic material that the brand has prepared for the presentation of this model, we hardly find references to the vehicle itself, this is just the excuse to show us the real news, his cabin. Externally, we find a kind of extremely simple and clean minivan that has some features of the brand, such as the circular optics or the line that hints at the grill. The shape of the underbody and wheels, quite large for a model of this size and which the company defines as skateboard wheels due to their proportions, give it a certain crossover air. Although the truth is that we are facing a manual minivan.

The true purpose of this exercise in style is to show us the enormous and striking capabilities of its interior, since each and every one of the elements of the cabin they can be moved or altered in some way to offer more comfort to the occupants once the vehicle is parked. If the driver’s seat is an armchair that can rotate to face the rear, the dashboard itself is lowered to become a seating area, while the huge panoramic windshield can be opened as if it were a large window or bay window. In the rear area we can access through a large sliding glass door that gives access to a cabin that becomes open-plan and that even has huge padded areas as a divan.

Although the company does not expressly detail it, it is clear that this virtual prototype is an electrical model, hence it allows a completely flat background for designers can play with the design and the different possibilities of the interior. The purpose of the MINI designers was to explore the different possibilities that electric urban vehicles will have in the future, since in addition to the technology that drives them, vehicles are undergoing a big change in terms of how they are used, which is perfectly reflected with this British prototype.

BMW iX, an electric SUV that marks the beginning of a new eraRead news