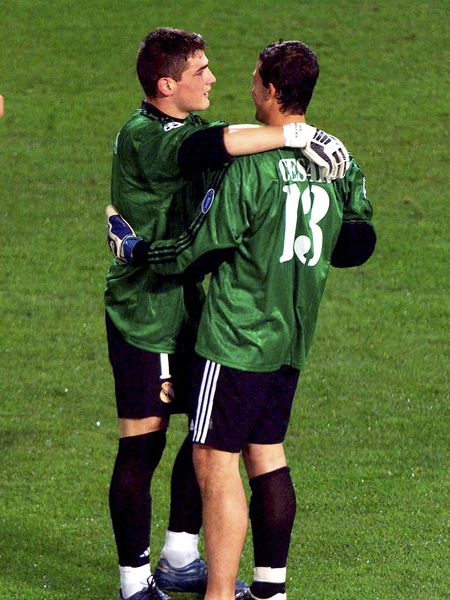 Casillas and César, after the final of the Champions League in Glasgow 2002. DIARIO AS / EL PAÍS

Luis Aragonés said that the patron of the substitute goalkeepers had been Miguel San Román, better known as Pechuga, his teammate at Atlético in the sixties and that in 11 seasons on the red-and-white roster he played only 47 league games. “He was so identified with the substitution that when the coach told him that he was going to play, he began to speak wonders of the partner on duty, what a poor thing, how was he going to remove him… He defended him in such a way that it made the coach doubt. In games, if the fans got involved with their goalkeeper, they would get up from the bench and face the public to defend him ”, recalled Luis.

The figure of the substitute goalkeeper is as old as football itself and never understood borders. Even in the last century it was more ingrained. I was playing one. Always the same. La Liga, the Cup, continental competitions and even friendlies. The other waited for the injury or several consecutive failures by the starter to have a chance that lasted as long as it lasted. Over time, your horizon has improved. Now he is recognized in football slang as the second goalkeeper, which is the same, but it is not the same. And there is, in addition, a third party that rounds up the template. Today some coach grants the substitute the title in the Cup, for example. There are even technicians who bet on having two presumed starting goalkeepers and taking the risk of a bicephaly between the three clubs.

Spanish football has four very special cases: Iribar, Arconada, Zubizarreta and Casillas. At his side about thirty goalkeepers despaired. Some decided to leave, others endured …

Meléndez, between Zubi and N’Kono

Known for his thick mustache, Carlos Meléndez (Bilbao, 64 years old) played six league games the season before Zubizarreta joined Athletic. Since then, 1981-82, he has not played any more. Five seasons in white. The most that got to play was one Cup match against Eibar and four of the League Cup. He left for Espanyol in the hands of Javier Clemente and in six seasons, one in the Second Division, he only accumulated five League games, 11 in the Cup, two in the UEFA Cup and two in the promotion to First, in the shadow of N ‘Kono.

Linked to football as an analyst of Athletic’s grassroots football, Meléndez rewinds those times. “Everyone has to know what they have and above all, whether you play or not, be a professional. Either you give up or they kick you out. You have to be prepared for the moment when they may need you. I always had it clear and assumed. I would have liked to participate more, but I had the stage in which the starter always played and in all competitions. I only played the Cup at Espanyol with Luis Aragonés. Now it is a little different. The second goalkeeper counts more, he has more opportunities ”, he affirms.

He acknowledges that he had a couple of chances to get out of his anonymity: “Then it was not easy to leave. The right of retention existed and even when you finished the contract they could retain you with a 10 percent increase. While at Athletic Zaragoza called me. And at Espanyol Tenerife called me when they were promoted to First Division, but there was no way. The clubs did not agree. You were in their hands. We did not manage our life as now ”.

Meléndez assures that the label in question never weighed him. “I didn’t take it as something pejorative. I don’t remember special moments when I wanted to throw in the towel. I did not withdraw out of boredom. I left with 36 and curiously in the last years of my sporting life it was when I played the most, within an order, of course. Even if I didn’t play, I have felt the affection of the Athletic and Espanyol fans ”.

Caesar and the theory of the two headlines

César Sánchez (Coria, Cáceres, 49 years old) can talk about the vagaries of destiny. At 27, in 1999, he was indisputable at Real Valladolid and signed for Real Madrid. Both parties decided that he would stay another year on loan at Pucela. Cesar would arrive the following year to be a starter. Nobody could have imagined that, in that season of the process, an 18-year-old boy named Iker Casillas was going to appear out of nowhere, who would overtake Illgner and Bizarri and take over the position. Caesar’s situation changed radically. He had to fight for a goal that seemed his.

“Those years when I played less were worth a lot to me. You realize when time passes. You remember what you suffer. You look for the opportunity. You wait And when it comes you are more mature. The life of the goalkeeper is like that. He came from playing more than 40 games per season. It was not pleasant being a second goalkeeper, but you have to know how to carry it and prepare for when you have to play. Ripe. You see things from another perspective. The moment you relax you go to waste ”, he says today.

From his extensive experience he contemplates the complicated theory of having two goalkeepers of a similar level. “How long can this situation be maintained? That is why they are looking for someone who can be more comfortable with their role of playing less, as it happens now in many teams. The holder needs the substitute. It is normally healthy competition. In that stage of Madrid with Iker we tried to maintain a good relationship. Even more than what the sensation might give from the outside. We trained, we fought. I do not dislike that idea of ​​the two starting goalkeepers. It is the coach who has to manage it. Direct competition improves both. At Real Madrid it also happened with Courtois and Keylor and it was positive. Training yourself day by day knowing that situation is good. It doesn’t allow you to relax for a second. If you don’t play, you have to avoid conformism ”.

Amieiro, the eyes and ears of Del Bosque

As Real Madrid goalkeeping coach, Manuel Amieiro (Madrid, 67 years old) experienced first-hand from 2000 to 2005 the fight for ownership between Casillas and César. “To understand what a goalkeeper who does not play feels, the best thing is to have suffered in your flesh. You catch an Iribar, a Casillas, and what do you do? How many goalkeepers with talent and conditions will not have burned them and others in their respective stages. The goalkeeper who does not play believes that he is in perfect condition to do so. You have to be very tactful and give them support and affection different from what you give the owner. Emotionally, the loss he has for not participating is remarkable. It is important to keep him mentally clean in case he has to play at a certain time. You cannot go out with your head blocked or full of doubts. It is a daily job and the credibility that the goalkeeping coach has with the player has a lot to do with it. If he does not believe in you personally or professionally there is nothing to do. There are people who hear and people who listen ”, he explains.

From his words it can be deduced that the Casillas-César stage was complicated: “César was already consolidated, but he had the fatality that Iker broke in with an impressive force and took a very important advantage both in terms of performance and media. Daily work was hard. You had to manage to get both of them involved, there was maximum collaboration between them. A lot of left hand ”.

At that stage there were two moments in which Del Bosque decided to turn the tables and César go from the bench to action. Amieiro had to deal with an obfuscated Iker. “It was an anomalous situation for him. He was unaware of the substitute situation and it was difficult for him to locate himself. I had to explain to him that in the same way that he had played before and the other had not, now it was time to change and he had to keep working. The worst moment was a week before the final of the Champions League in Glasgow [2002]. I explained that I couldn’t face a final like that. He started working as usual and the proof is that when he had to come out in the final, he performed as he did. Iker told me it was very heavy and I said: ‘Call me heavy, but not stupid.’

Ochotorena and the competition in the national team

With 20 years of goalkeeping alternating titles and substitutions and almost 25 as goalkeeping coach in clubs (Valencia, Liverpool) and in the Spanish team, José Manuel Ochotorena (Hernani, 60 years old) knows the cloth from both perspectives and considers that the most It is difficult to work with goalkeepers of the same level, as is especially the case in the national team. “No one accepts the role of not playing by system. They feel headlines. However, in situations where the holder is clear, the role of the substitute is better accepted. There are goalkeepers who have it super assimilated and do not give you problems. And if he is a good professional, who trains well, who squeezes whoever is going to play, all the better. I am more used to working with direct competition. In the selection above all. The goalkeeper who does not play must be pampered more. His work is important for the team and especially for the other goalkeeper ”, explains the former goalkeeper.

Pinto, the goalkeeper of the Cup

Your case is more recent. José Manuel Pinto (El Puerto de Santa María, 45 years old) came to play more Cup games (48) than League (34) and the Champions League (19) in seven years at Barcelona. His coaches relied on his experience – he was over thirty – for the KO competition and with him between the posts the Barça club won two titles (2008-9 and 11-12) and played two other finals that they lost to Real Madrid ( 10-11 and 12-13). In addition, he had the approval of Messi.