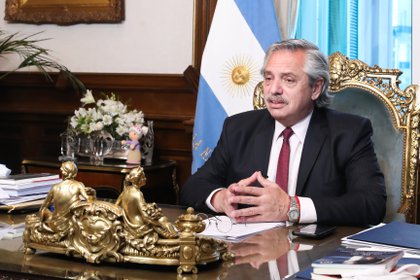 President Alberto Fernández in his office at Casa Rosada

At 7 in the morning a sanitary team entered Villate Street to swab Alberto Fernández, after a few minutes he was ready in the guest house of the Olivos Residence where the President completed his 10-day isolation, mandatory by the health protocol since he was in close contact with an official who tested positive for COVID-19, the Secretary for Strategic Affairs, Gustavo Béliz.

7.15 Fernández had completed the second swab. The first had been done last Tuesday the 11th, after knowing that Béliz had been infected. The same did the two officials who also shared the presidential isolation in the guest house, the secretary general of the Presidency, Julio Vitobello, and the secretary of Press and Communication, the presidential spokesman Juan Pablo Biondi. After 9 o’clock, it was officially reported that the President again tested negative in the PCR test, so that he is now able to resume his usual activity.

As anticipated . And yesterday the Chief of Staff, Santiago Cafiero, confirmed in the press conference he gave at Casa Rosada to announce the increase in pension assets by decree, the first official act that the President will have will be to take the oath of the new Minister of Territorial Development and Habitat, Jorge Ferraresi. The ceremony is scheduled for 6.30 pm.

The ceremony became important, because the area is considered vital to implement a political solution to the problem of land grabs and reactivate the construction industry, where the Rosario architect María Eugenia Bielsa could not have achieved the size expected. The officialization of his replacement coincided with the beginning of the presidential isolation and, the face-to-face welcome was provided by Cafiero, who received him at Casa Rosada on xxxxxxxx. The next day the Official Gazette appeared, but until the swearing in, the signature has not been enabled and, therefore, its operation is not official.

Tomorrow, Friday, the President plans to travel to the Buenos Aires town of San Pedro, to attend the tribute of the Vuelta de Obligado, the xxxxxxxxx battle where he is expected to make a prominent speech. The event is controversial and historians do not agree on whether it was a great feat of reaffirmation of sovereignty or a strategic error that cut the wings of the interior to trade directly with the powers of that time, Great Britain and France, benefiting only the province of Buenos Aires. the provinces their possibilities.

Despite the ten days of isolation, Fernández was very active. He continued permanent contact through communications via WhatsApp with the ministers and meetings he held with several of them virtually, in addition to exhaustively monitoring the official government agenda in judicial matters, on the one hand the future of the Attorney General de la Nación and its candidate, Judge Daniel Rafecas, and the xxxxxxxxx commission that he constituted and yesterday delivered the 700 pages of non-binding recommendations, with

In addition, he sent the abortion legalization project to Congress, gave a message to the militants who mobilized Congress to defend the wealth tax, followed up on the – not yet signed – trade agreements for Argentina to receive vaccines in A date that is still under discussion, he analyzed daily the conversations with the delegation of the International Monetary Fund (IMF) led by Martín Guzmán, and sought to appease the criticisms of the CGT