The new 2022 Jeep Compass is the first major update for the current generation of the compact crossover and has been officially unveiled at the 2020 Guangzhou Auto Show. It features slight cosmetic changes to the exterior, an all-new dashboard and some new features equipment. Although at the moment we only have the few confirmed data of the Chinese variant.

Although the 2020 Guangzhou Auto Show does not officially open its doors until next Sunday, November 22, the accredited media have already had the opportunity to access the facilities of one of the few motor events that will be able to be held this year. One of the most important novelties for the global market that will be presented in Guangzhou these days is none other than the first major update the current Jeep Compass will receiveand it has already been fully revealed.

These images correspond to the Jeep stand in the International Automobile Exhibition from Guangzhou, where we can find several examples of the renewed Jeep Compass 2022, including units of the new special edition 80th Anniversary or the variant Trailhawk, specially configured for those users who want to use crossover off the asphalt. 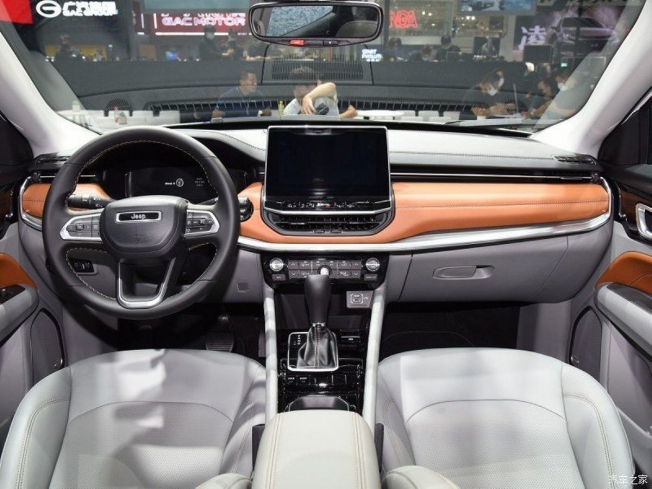 The new dashboard of the Compass 2022.

At the moment, both the images and the little data we have correspond to the variant of Chinese specifications, so we must wait for the company to reveal the official images and information related to the Jeep Compass that is going to be marketed in markets such as the European or the American. Although the truth is that we don’t expect to find too many changesThe Jeep Compass currently being sold in the eastern market is practically indistinguishable from the one found in dealerships on this side of the globe.

Being a mid-life cycle update, the news is not too great, although the Chinese press assures that the variant presented has a 9 mm longer length and 17 mm more in height, which we assume is due to the different changes that the bumpers and wheels of the model have undergone. At the exterior level we do not find major changes, except for small aesthetic details in the optics and the grill, the bumpers being the elements that present the most news. At the moment two different design lines are still available, regular versions and those equipped with the Trailhawk off-road package, which has specific bumpers and wheels, easily recognizable by the red tow hooks in the front area.

Inside we find a totally new dashboard, with a much more luxurious and technological appearance, with synthetic leather coverings that cover much of the dashboard itself and the center console, which has now been radically changed to adopt a very minimalist structure with a single row of controls and a 10-inch top floating screen instead of the previous 8.4-inch available so far. A digital dashboard is also released, of which we have not seen images for now.