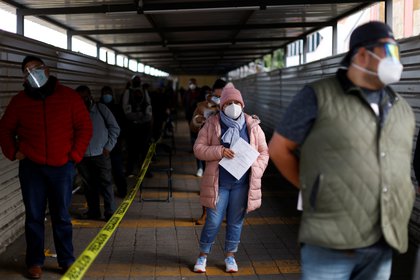 Last week, the State of Mexico was 18 points from the stoplight. On November 20 it reached 22 points. If it reaches 32 points, the change to red would be imminent (Photo: Carlos Jasso / .)

The Secretary of Health of the State of Mexico, Gabriel O’Shea Cuevas, stated that the entity could return to the red color of the epidemiological traffic light due to the increase in infections by COVID-19.

We are getting closer to the color red

In an interview for various media, he indicated that the intention of the Mexican entity is stay in the color orangeto the remainder of the month of November and all December. However, he insisted that everything it will depend on the behavior of the population.

The only way to avoid it is that people continue to behave responsibly, avoiding that everyone go to the supermarket or the shopping center, you have to some limitations and continue with distancing that we had from the beginning, ”he said. 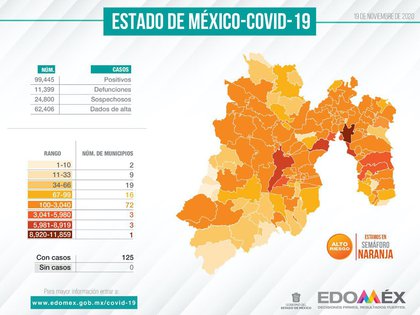 The main Mexican territories where new infections were registered were the Metropolitan Area of ​​the Valley of Mexico and Toluca (Photo: Twitter @ alfredodelmazo)

O’Shea Cuevas mentioned that last week, the Mexico state he was in 18 traffic light points, and for him November 20 reached 22 points. Warned that reaching 32 points, the change to red would be imminent.

The main Mexican territories where new infections were registered were the Metropolitan Area of ​​the Valley of Mexico Y Toluca. Given this, it is expected that the state health authorities issue preventive measures to avoid further spikes.

Regarding the hospital occupation, the health secretary mentioned that intensive therapy is at 38%, while the beds used reached 44%, this indicates an i2% and 6% increase respectively. 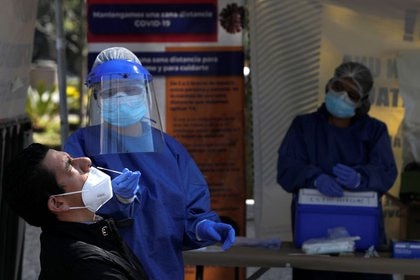 On the afternoon of November 19, the Governor of the State, Alfredo del Mazo Maza, published in his account Twitter cases of coronavirus in the entity, where it is shown that there are 99,445 positive cases, 11,399 deaths Y 24,800 suspected cases.

In this sense, it is observed that 125 municipalities have infected people by the virus SARS-Cov-2. State health authorities detailed that all registered hospitalized patients receive care in hospitals of the various Mexican health institutions, but there are also 1,881 who are admitted to hospitals located in other regions of the country.

Despite this rise in infections and hospitalizations, from the deck assured that it is possible boost economic reactivation and take care of the health of the population, so he exhorted the population to don’t let your guard down and to continue and strengthen precautionary sanitary measures, such as the use of face masks, frequent hand washing, keeping a healthy distance and the use of antibacterial gel. 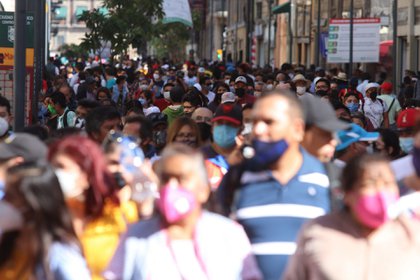 In establishments in the State of Mexico, the maximum capacity will be 30% for restaurants with closed areas, and 40% for those with open spaces (Photo: Graciela López / Cuartoscuro)

In this sense, one of the sanitary measures established by the Mexican government has been the call to local businesses to comply with the recommendations of the authorities imposed since July 3 of this year.

For example, him maximum capacity will be 30% for restaurants with closed areas, and 40% for those who have open spaces. They should also sanitize the places, clean the ducts ventilation and kitchen hoods, have natural or mechanical air flow, remove napkin rings, advertisements and decorations, as well as implement digital menus or blackboards.

“The mexiquense government, in accordance with the agreement establishing extraordinary actions to attend this emergency, refers to comply with the sanitary provisions and delimit the healthy distance in these work, will allow you to advance in color at the epidemiological risk traffic light”, Asserted the health authorities of the Mexico state.

Drug trafficking in Edomex: they captured an extortionist who claimed to belong to the CJNG

Macabre discovery in the State of Mexico: they found four bodies in a truck

State of Mexico without sexual conversion therapies: deputies approved sanctions for people who lead these acts