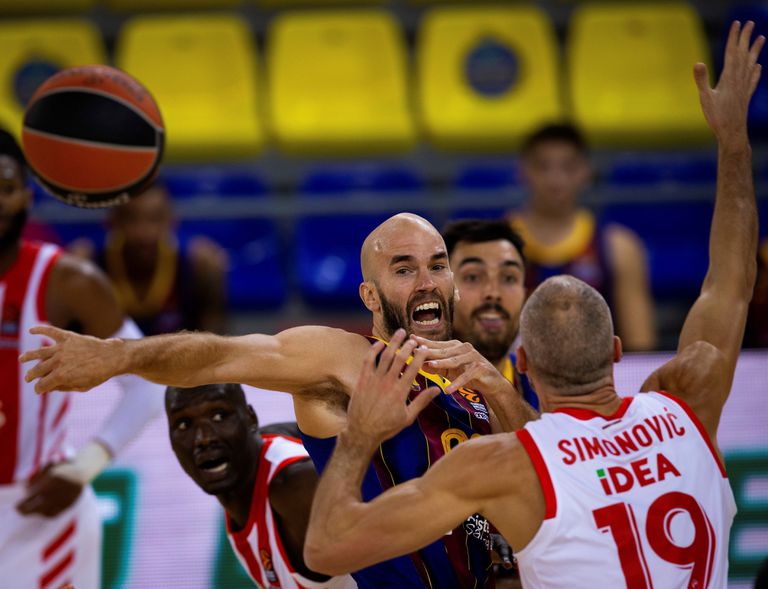 Calathes gives a pass in the presence of Simonovic.Enric Fontcuberta / .

The Red Star weathered the storm against a Barça that began to fan the flames that for many years flamed in the Palau. Jasikevicius’ team feels strong as it has not been for a long time, since it plunged into a long crisis in 2016 during the last year with Xavi Pascual. Little by little he recovered. He raised the bar starting in February 2018 with Svetislav Pesic. But now, in the third month with Saras Jasikevicius on the command bridge, Barça is beginning to spread panic among their rivals. The Red Star was the victim on duty, as had been Alba Berlin or Fenerbahçe. The Euroleague leader marked enormous distances, was rushed by the final reaction of the Red Star, but had no major problem to add his seventh consecutive victory in the competition.

This Barça is capable of turning off the tap to the point of putting their rivals in trouble as soon as they start to bounce the ball. It took Red Star four minutes to score his first basket and went into halftime with six points. And that in its ranks has the top scorer in the Euroleague American forward Jordan Loyd, NBA champion with just minutes in the Raptors, but highlighted last season with Valencia Basket, had an average of 21 points this season. But Abrines and Hanga, with the collaboration of the Barça defensive team, left Loyd dry, who could only score two points, and from the free throw line.

The Red Star had the merit of reacting at the end after a first half in which they did not know how to gain the slightest advantage against the dynamic and tenacious defense of Barça. Nor did he manage to stop Calathes’ innings to the basket, almost always superior to Langston Hall, nor the advantages that Barça got through theft of balls, to load the offensive rebound and, as always, to benefit from Mirotic’s class.

Jasikevicius does not miss a single one, regardless of what the scoreboard says. Sergi Martínez was not saved from one of the classic quarrels of the Lithuanian coach nor the man of fashion, Leandro Bolmaro, the Argentine who already has Minnesota rights in the NBA, when things got a little more tricky. Red Star, led by Reath and Langston Hall, reduced their deficit from 24 points (46-22) to 12 (63-51).

The struggling Serbian team only had the hope that Barça would get lost, take a break. But Barça’s downturn was temporary, although it did cause some alarm when Terry and Rochestie gave a last stretch that put their team to only seven points (69-62). Mirotic charged again to round off a great performance once again with 23 points.

Visiting the Palau is suffering. The longing of the public, in this case, is accentuated. The game played by this Barça de Mirotic, Abrines and company would deserve the reward of a hobby that yearns to accompany their team on site. Barça added their sixth victory this month with an average of almost 20 points difference. A mattress in view of a December in which 12 games await him, the penultimate, on the 27th, on the Real Madrid field.