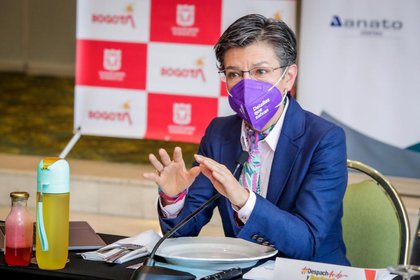 This Thursday, February 18, vaccination against covid-19 began in several cities of the country, including the capital. However, something that surprised the inhabitants was when, in the morning hours, the immunization of Bogota citizens began at the Colombia Clinic and Kennedy Hospital and Mayor Claudia López was not at the scene.

Since the early hours of the morning, López has been reporting the progress of vaccination through his social networks and it was expected that, like the vice president and the minister of Health, the president of the capital would be present in the application of the first dose of the Pfizer vaccine in the city and appeared in the, now traditional, photo with the V of ‘Victoria’ that other officials have shared.

In fact, those who did appear at the scene were Vice President Marta Lucía Ramírez and the Minister of Health, Fernando Ruiz, who took their photo at the Kennedy hospital, where they spoke with the local president, who communicated with them from the Unified Command Center, where López has been since 4:00 am, as reported on his social networks. 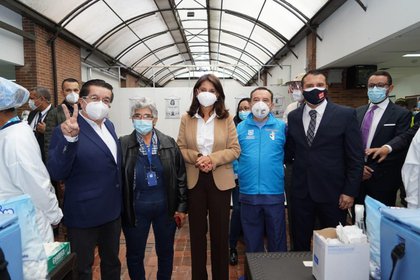 Minister of Health, Fernando Ruiz, at the start of vaccination in Bogotá. Photo: Ministry of Health

As reported by Noticias Caracol, the mayor of Bogotá preferred to stay at the Unified Command Center at the headquarters of the Ministry of Health to coordinate the entire vaccination process at the points of the city. In addition, this would coincide with the speech that López has maintained in recent hours when questioning the photos that officials such as Minister Ruiz have published after the vaccination.

Unlike the photos with the V and the first vaccinated, the mayor appeared in a snapshot from the PMU in which, through a microphone, she communicates with the vaccination posts.

The @SectorSalud team and the @Bogota cabinet chief are supporting vaccination in the 9 hospitals that started.

Since 4am I am personally coordinating the Unified Command Post-PMU to ensure that the necessary logistics and coordination go well! pic.twitter.com/jmTdmdOfN1

In fact, before the vaccination began at Kennedy Hospital, a situation occurred that already causes reactions on social networks. Minister Fernando Ruiz took the floor and stressed that “the mayor is communicated from somewhere,” suddenly Lopez’s voice was heard through a speaker, ensuring that he was aware of everything and thanked the minister for his presence.

“I want to say it with all emphasis, My Vaccine is a national program, My Vaccine is a program that all of us, throughout the country, are working with the effort of the national government with the territorial entities“Said the Minister of Health before the immunization of Bogota citizens began.

Ruiz then handed the microphone to Omar Penilla, manager of the southwestern subnet of medical centers in Bogotá, who began to explain what was going to take place at the site. However, when Penilla thanked the minister and the vice president for their presence, the mayor intervened again and hurried the situation. “Doctor Penilla, to vaccinate!”, The president was heard through the speaker.

Immediately, the president announced who would be the first vaccinated, “Let’s start with three: Maria Teresa Rubiano, a professional nurse with 27 years of service; the doctor Diana Forero, specialist in internal medicine in Pulmonology and doctor Andrés Almanzar, coordinating physician of internal medicine and coordinator of the COVID ICUs of the entire southwestern subnet ”.

Then the Secretary of Health, Alejandro Gómez, took the floor, who attended the hospital instead of López, and he explained that the vaccination posts were going to be in several hospitals in the city and that they would make sure to immunize the first line of care for covid-19 in medical centers. Again, the mayor intervened over the speaker saying “Moving away, to vaccinate, my brother!”, order that was followed immediately.

Cali postponed vaccination to wait for the Minister of Justice

“It is a minor detail. We wanted to give height to the symbolism ”, governor of Sucre justifies the assembly of the delivery of vaccines for the photo