In the midst of the struggle to stay alive in a Euroleague in which its future will be played on Thursday, Real Madrid did not neglect its duties in the ACB defeating the bottom, an Acunsa Gipuzkoa Basket that he could do little against the leader and that he will continue one more week at the bottom of the table (97-71).

Match corresponding to matchday 29 of the Endesa men’s basketball league played behind closed doors at the WiZink Center (Madrid).

With Nico Laprovittola and Alex Tyus as the most outstanding players, with 18 and 20 points respectively, the whites just had to force the machine to add their twenty-seventh victory in a day in which Pablo Laso chose to reserve for the game against Fenerbahce men like Walter Tavares, Trey Thompkins, Gabriel Deck or Fabien Causeur.

With little success in the shot and Mind set on Istanbul, the whites started off with the handbrake on and, in the beginning, they gave the dominance of the marker to the Donostiarras. The triples did not enter the leader, who made up for it with the points in the paint of the American Alex Tyus. Well assisted by his teammates, the American became the top scorer in the first ten minutes with eight points.

Neither had their best evening. The ties followed each other until, in the last minute of the first quarter, the Argentine Laprovittola broke into the clash and released the triple locker of his team, which went to the first break three points up (18-15. min 10).

Shooting errors dragged on at the restart for two minutes in which both rivals continued to spoil their statistics. Without much luster, Real Madrid linked a couple of hits from the perimeter and, helped by Felipe Reyes’s work in the area, began to escape against a San Sebastian team that disconnected in attack and in which only the ex-Madridista Dino Radoncic contributed.

The triples woke up Pablo Laso’s team, which had Laprovittola and Rudy Fernández as the most inspired players, and led to a partial of 15-7 that forced to Marcelo Nicola stop the game seeing himself eleven down four and a half minutes from the break

Acunsa could not find solutions in attack and lost the rebound battle. In addition, he was inspired by an accurate Laprovittola who, with three triples and eleven points in the second quarter, was key in the local takeoff. Thanks to the Argentine base, Real Madrid went to the locker room with the crash on track and your maximum income so far (44-30, min 20). 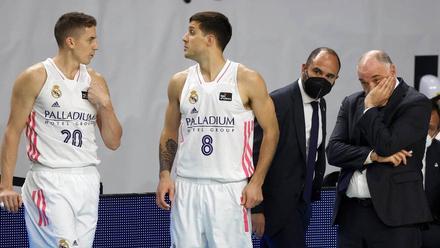 Very placid victory for the leader of the Endesa League

The exchange of blows did not benefit the interests of the bottom. Real Madrid did not see their dominance in danger and Laso took the opportunity to distribute minutes among his men, aware of what is at stake this week with the visit to Istanbul and the classic against Barcelona.

Alberto Abalde hurt with his baskets and Tyus continued to take advantage of his minutes to vindicate and gain confidence. A triple from the corner of Jeffery Taylor raised the income for the first time above twenty points and left the clash settled prematurely given the lack of response from the Guipuzcoans (67-46, min 30).

With a 2-7 start, the Basque team tried to clean up the gap at the beginning of the last quarter, although the white response came from the arc again, with a triple from Usman Garuba and two from a fairly recovered Rudy Fernández that ended up sinking his opponent. After finishing the bottom, Real Madrid prepares for the battle against Fenerbahce.