The general directors of Health the Ministry and the communities will decide this Friday how to get on with those under 60 years of age who have already received a first dose of AstraZeneca and those who decided not to continue immunization with that same brand. The Public Health Commission will meet to address an issue that the Minister of Health, Carolina Darias, I wanted to delay until the first results of the Carlos III Health Institute clinical trial are available in mid-May. But he has finally agreed to overtake her by pressure from communities And because next week is the deadline for when people who received AstraZeneca should receive their second dose.

While waiting to know the decision, Darias has made it clear that the Ministry position it does not go through inoculating the second dose of AstraZeneca, as recommended last week by the European Medicines Agency (EMA). On the contrary, it has insisted on the need to have at least “scientific evidence” which will facilitate the ongoing trial, which attempts to confirm the hypothesis that it is possible to inoculate a second dose of Pfizer. As he has said, this is what countries such as Finland, France or Germany are already doing, even without having scientific data to support it.

As if it were not enough to show her opposition to putting a second dose of AstraZeneca, the minister has also referred to the case of Ireland, which has extended the interval to the second dose, even though the EMA insists that it has to be between 10 and 12 weeks. Already last Monday, the director of CCAES, Fernando Simon, He insisted that “the 12 weeks is the margin in principle to put it but it can be extended a longer time, no problem putting it in later. “

Just three days ago, Simón also said that the decision had not yet been made but that “the time frame” would be sufficient until the clinical trial of the Carlos III Health Institute will end, which is expected to show its first results in mid-May. 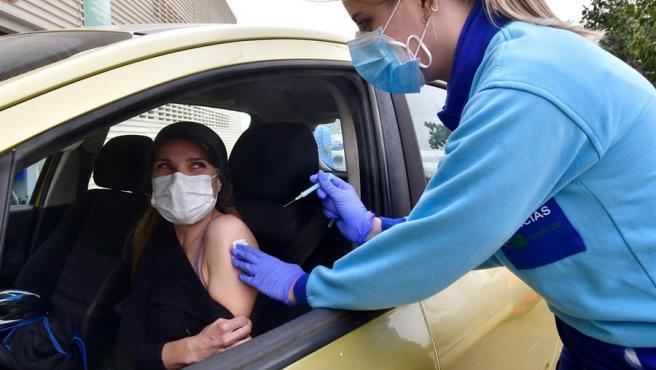 The Government position has changed this Wednesday, when Darias announced that this issue will be addressed and decided in a new meeting of the Public Health Commission this Friday, which will be held a few days before meet the three-month deadline since children under 60 years of age began receiving the first dose of AstraZeneca.

The exhaustion of this period and, therefore, the urgency to make a decision has been recurrent in recent weeks among the communities and this Wednesday that of Madrid has raised it again in the Interterritorial Health Council. Your advisor, Enrique Ruiz Escudero, has insisted on the need for set a criterion to proceed with the second dose to a group that in the Community of Madrid exceeds the half a million people, when next week they would have to receive the second.

Sources present at the Interterritorial Health Council have indicated that Darias has not given an answer to this request, but in the subsequent press conference he announced that the Public Health Commission will decide on Friday and has made it clear what his approach is: inject them with Pfizer, even if the EMA recommends AstraZeneca.

“The Public Health Commission will have to determine if it decides an option that would be to continue with the vaccination with AstraZeneca and another, to wait for the clinical trial to take place,” said Darias, who added that “will respect the decision that comes” from this body.

“We have the experience of other countries that are administering the second dose of Pfizer without scientific evidence and we try to generate it. It might be worth the wait, but that is our position, respectful with that of others, “said Darias, who pointed out that it is a” complex and difficult “decision.