FC Barcelona will have to subscribe to the epic if it wants to lift its fifth league title after falling on penalties this Thursday at the Palau (2-2 at the end of regulation time and extra time) against a Levante UD who showed how well worked he is and to whom fortune smiled with four local shots to the wood.

First match of the final of the men’s futsal First Division league played before 1,846 spectators at the Palau Blaugrana (Barcelona).

Therefore, the team led by Diego Ríos and supported by its president, Quico Catalán He will have the opportunity to win his first title next Sunday from 8:00 p.m. in Paterna.

The match could not have started better for the locals, since after Fede clearances to shots from Ferrao and Marcenio, the best player on the planet took advantage of his second option to sign the 1-0 after two minutes. And immediately afterwards Aicardo could not with Fede in a heads up.

Levante grabbed their best player to balance the match, an Esteban for whose return Barça should fight for 2022. The Spanish international did not reach a pass from Roger Serrano in 3 ‘in a play between the various ex-Azulgranas of the Granota team and crashed a shot on the post in 5’.

The visitors had taken the ball thanks to a high pressure that did not allow the Blaugrana to carry out their combinatorial game and a remarkable Marcenio crossed before Roger Serrano just before the Catalan scored 1-1 in the 10 ‘ with a masterful so much of Vaseline that he did not celebrate in one more test of his Barça.

Ferrao and Esteban could not score and Andreu Plaza stopped the game to insist on the need to use Dídac more advanced. However, a stopped ball allowed another ‘ex’ like Rafa Usín to establish 1-2 in 15. 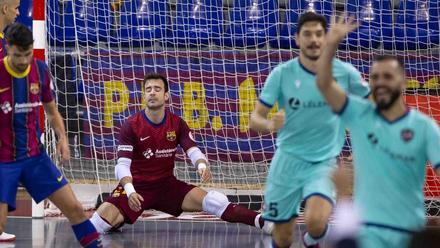 Rafa Usín turned the score around in the 15th minute

After a few minutes with nothing to review, Barça grabbed onto Dídac to start creating danger and deserved a draw that didn’t come because of the shots to the post by Marcenio in the 19th minute and by Daniel in the last seconds.

It was time to repeat a second half start as in the ‘semis’ against Palma (that day with an adverse 0-2) and the team tried, but in the first five minutes He only offered a Ferrao auction to which Fede responded well and a quick counter in which Marcenio did not know what to do.

Barça grew and Ferrao kicked out in the 26th minute when he had only Marcenio at his side. By the way the referees indicated three fouls in a row to Ferrao. And they could be, but it would also be necessary to be more aware of the grabs and shoves that he received.

And since there is nothing worse than angering the ‘beast’, Ferrao ran to receive a sensational pass from Dídac and make it 2-2 with a shot to the long stick against which the exporter from ElPozo Murcia could not do anything. 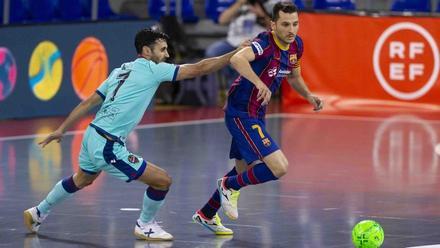 Dyego emptied himself despite his battered left ankle

From there the meeting became a nervous game, with both teams knowing the enormous importance of this first point in a tonic that Ferrao broke with a shot almost to the square who deflected Fede with difficulties, although on the other side Maxi Rescia (what a great player!) also demanded Dídac in the 34th minute.

Barça was better and its main argument, Ferrao, sent a missile to the crossbar at 35 ‘ on the third wood from the locals with 4-4 on the foul marker. And his compatriot Dyego emulated him in 37 ‘sending his to the post and there were already four. Diego Ríos tried to change the decoration by giving Rubi Lemos the goalkeeper jersey with 1:42 left, but nothing prevented the extra time. 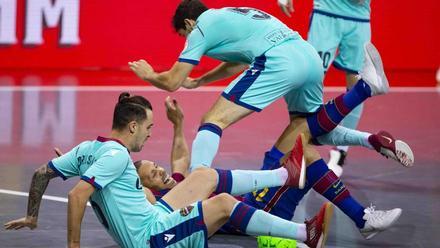 The tension was maximum from the beginning to the end

Levante continued attacking with five and made it into a cinema, since Rafa Usín finished off the crossbar on 42 ‘and Dídac immediately avoided Roger Serrano’s goal. The ghosts of last season returned to the granota.

Andreu Plaza responded by giving Daniel the goalkeeper shirt in the second part of extra time and Adolfo finished off a long pass from Dídac to empty goal 1:24 from the end with five fouls already for Barça. Dídac avoided Esteban’s goal in the absence of 1:06. Penalties!

This time the round of maximum penalties did not smile at a Barça team in which Ferrao, André Coelho and Joselito failed, which in the end was definitive for 4-5 and for the first Levantine point despite Dídac’s two stops.