For decades it was a vacation paradise, the place where many Venezuelans went to relax next to the Caribbean and disconnect from the hustle and bustle of the city.

Now it is abuzz with crime.

Every weekend, a crowd of Caracas residents was heading east by a road then among the busiest in the country in search of sun and pleasure.

In Barlovento, a region in the north of Venezuela dotted with tourist villas and dream beaches, many of the houses in their lustrous days that tourists occupied are today abandoned.

Fernando Valera, one of the few who bought a house in the town of Río Chico and he refuses to leave, he explains to me: “There is a house that is being sold for $ 3,000, but most of the owners simply abandoned theirs.”

The cause: the threat of crime. 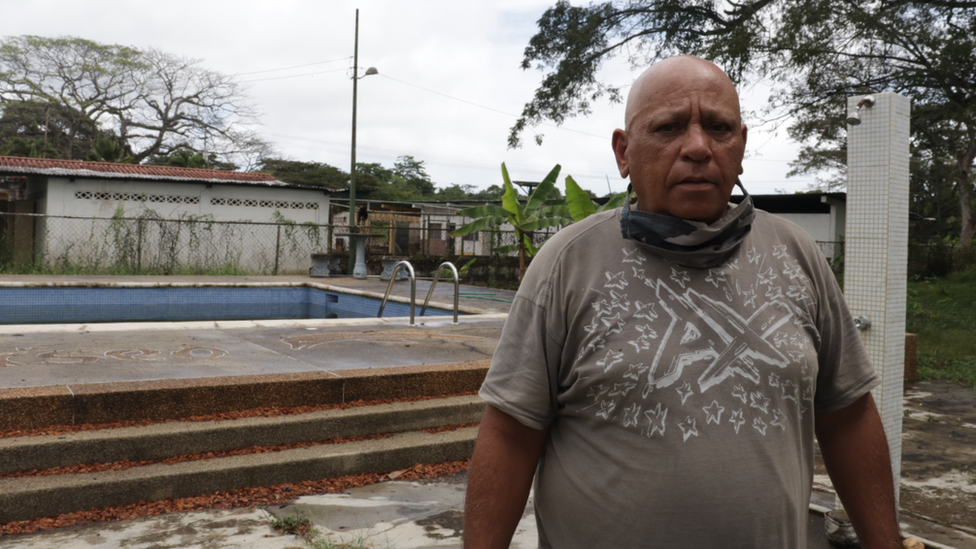 Fernando Valera has been assaulted 5 times at his home, but he is reluctant to leave it. (Photo: BBC)

There are many properties available here. Most sell them for very little money or the owners give them up just in exchange for someone to take care of them.

Raúl López, who was secretary of Economic Development for the Miranda state, which encompasses the Barlovento region, recalls that “in good times, houses here cost at least $ 80,000.”

But, despite the facilities, the interested parties do not appear.

One of the most abandoned areas is the Canales de Río Chico. Developed in the 1970s, its developers wanted to emulate some of the exclusive developments in Miami and other coastal locations in the United States, where luxury homeowners can drive right up to their driveway.

Water courses, piers and even a golf course were built. The business quickly paid off.

“In the 1980s there was a real boom in Río Chico of people buying vacation homes here and coming to spend weekends and rest periods,” says López. 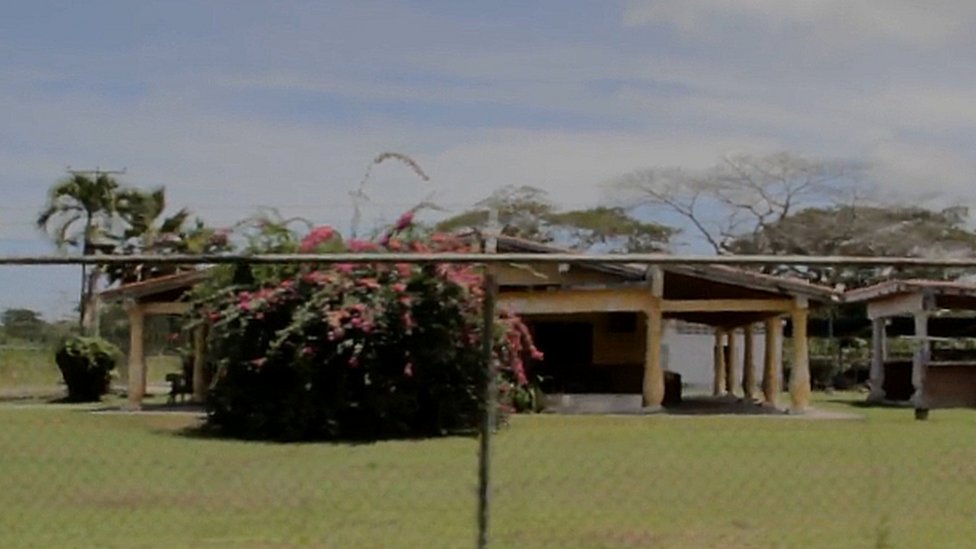 Homes like this are for sale for $ 3,000, when a few years ago their value was much higher. (Photo: BBC)

But things began to change dramatically in 2013 when the government began a negotiation process with dozens of criminal gangs to promote their disarmament and social reintegration.

They called it Quadrants of Peace, territories in which, in exchange for abandoning violence, the State would stop persecuting criminals and provide them with resources so that they would be economically viable without committing crimes.

Barlovento was one of those quadrants.

“Those areas of peace soon became a refuge for the gangs and from Barlovento they conducted their criminal activities in Caracas,” says López.

An ordeal began for the homeowners. “First they encountered petty theft, so that every time they came home to spend the weekend they found that something was missing, but then things got worse and the kidnappings began.” 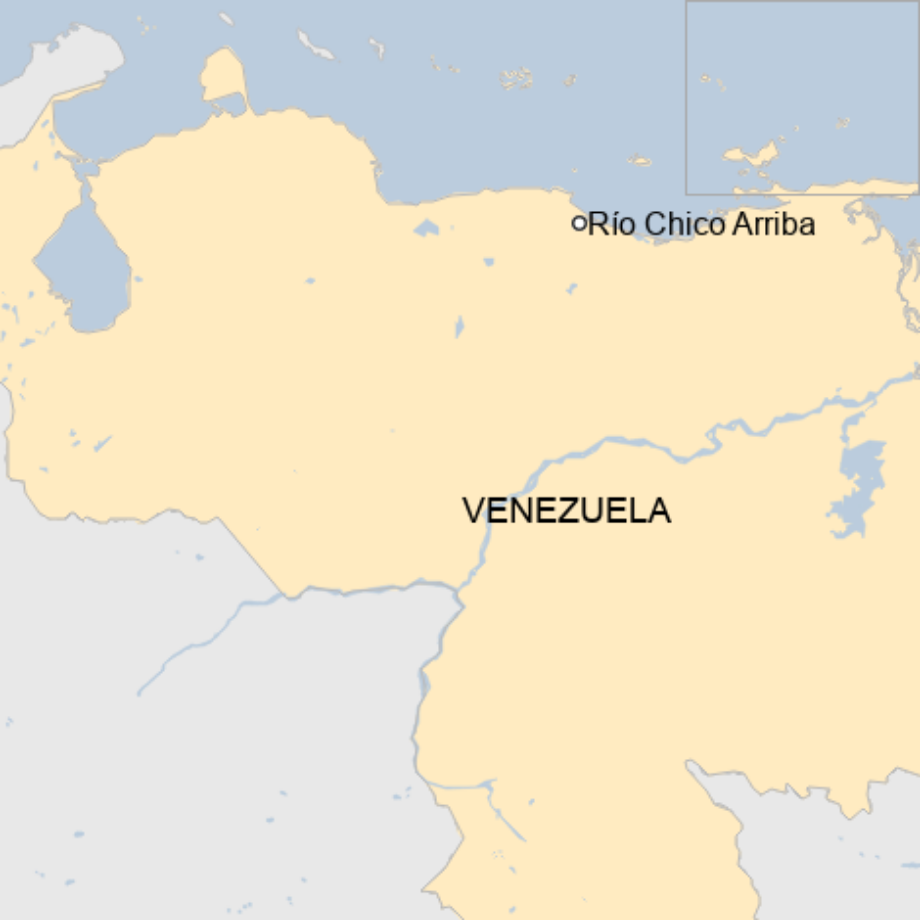 In addition to the economic deterioration of the country, which for several years has been experiencing an unbridled economic crisis that has pushed millions of Venezuelans to emigrate, and the growing difficulties in obtaining gasoline, caused many to give up their trips to Barlovento forever.

“Many are good houses with pools and only the maintenance of the pool already cost good money,” emphasizes López. 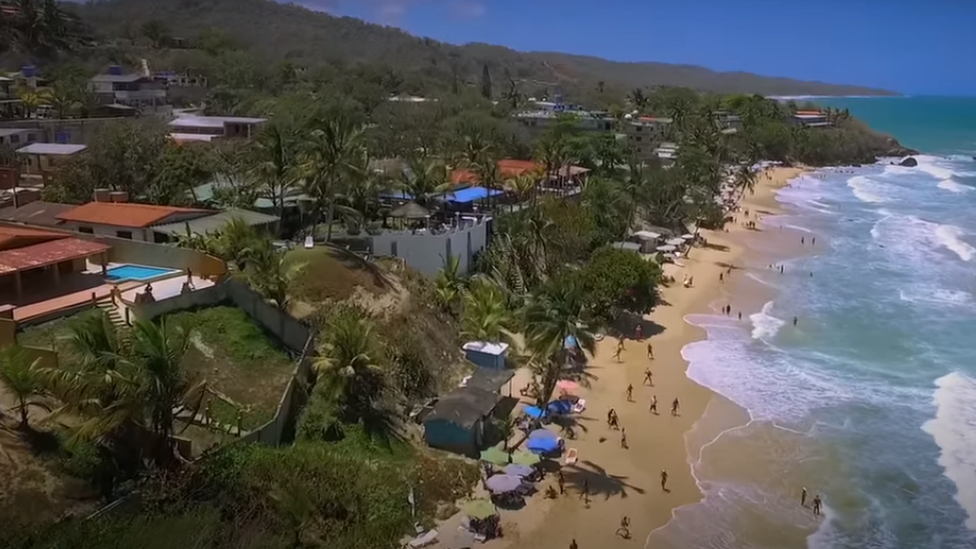 This image from a few years ago shows some of the houses in the area. (Photo: BBC)

Fernando Valera is one of the few who did not give up. “I have been robbed here five times,” he says.

“The first time it was between 15 and 20 men with long weapons and military clothing. They came out of the forest, they pointed guns at my wife and my nieces, who were in the pool, and they took me out of the shower ”.

Valera remembers that they acted with military discipline. “There was a leader who gave us orders and treated us correctly. The others obeyed; they loaded everything and took it away ”.

Others were not so “professional”. “In one of the assaults they were very nervous and they placed a machete on my wife’s neck.”

“They took it all”

After so much theft, his vast property looks almost empty. The essential appliances in the kitchen; and in the living room, a couple of armchairs and an old CD player. “I don’t want to have anything that attracts attention, because then they come and take everything.”

Like many others who had similar experiences in the area, his family does not want to return to the place that he dreamed of making the ideal resting place for them.

It was in 2010 when he invested what he was paid in compensation when he stopped working as a textile mechanic in Caracas to retire to a place where “one could forget everything.”

Listening to the song of the tropical birds that flutter through the palm trees of your garden, one could believe him.

But, as we speak, a National Guard agent appears on a motorcycle to remind that the recording equipment should not remain in sight for long. “This area is not very safe,” he warns.

The police presence in the Río Chico area has increased in recent times and Fernando says he has lived more calmly since they installed a National Guard command near his home. They often pass by and look out for him.

But some of the police tactics have caused controversy and international criticism of the government of Nicolás Maduro.

“Things are improving because many of the thugs (criminals) who had whipped this area have been eliminated,” says Fernando.

He says that a few days before our meeting, three alleged criminals were killed by the Police Special Actions Force. He is not the only one in Río Chico who reports agents raiding the wooded hideouts of criminals to finish them off.

The United Nations Human Rights Office has reported thousands of these “extrajudicial executions” in Venezuela in recent years.

The government did not respond when BBC Mundo asked for information. 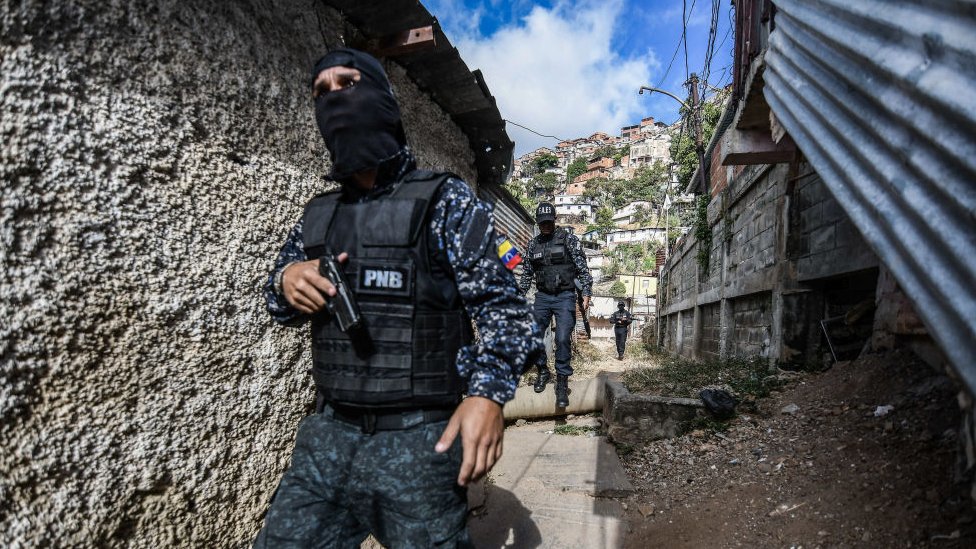 “It is not that I am happy that they are eliminated, but at least I hope there is tranquility,” says Valera about the murdered criminals.

In the municipality of Río Chico, it is not difficult to find old vacation villas reduced to ruin. 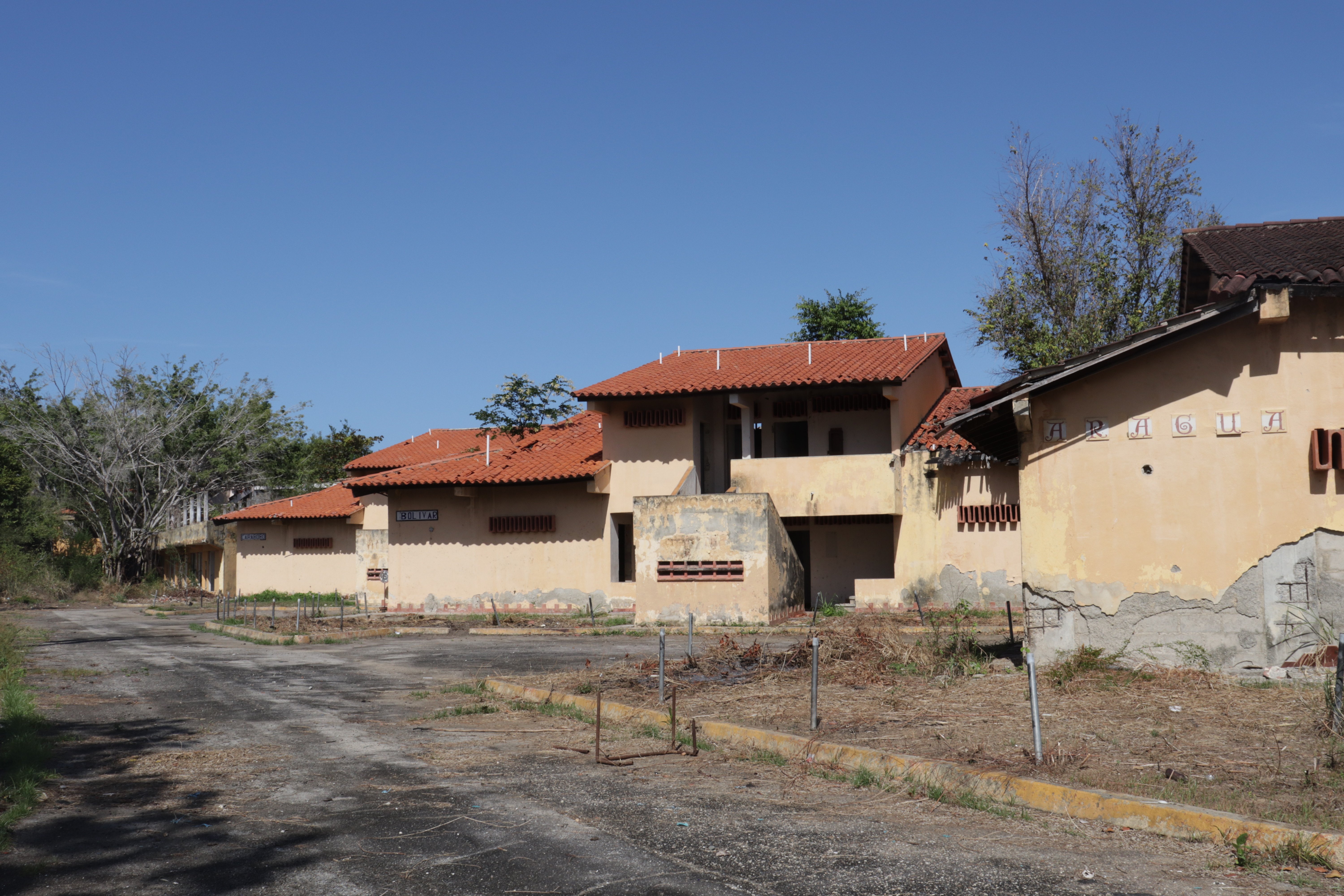 Río Chico is dotted with vacant villas that are now abandoned. (Photo: BBC)

Some were owned by large companies in the country that offered them at advantageous prices to their employees, or by the State, which stopped taking care of their maintenance some time ago.

Very poor families have found shelter in them and groups of barefoot children can be seen in their perforated streets carrying buckets of water at the mercy of the evening mosquitoes.

Nearby is Caño Copey, the immense and deserted beach where Carlos Quintana spends his days.

He says that in his day he served in the personal escort of the late Hugo Chávez. Now he is the lifeguard on a beach that hardly ever goes to.

“I spend all day sitting, watching the water, the sand and the breeze.”

The tourist brochures that survive on the network describe Caño Copey as “a place where you will have the necessary tourist services to spend a quiet day at the beach.”

Also on the web there are videos that show a bird’s eye view of the houses with pools, the beaches and the network of canals that run through the area. 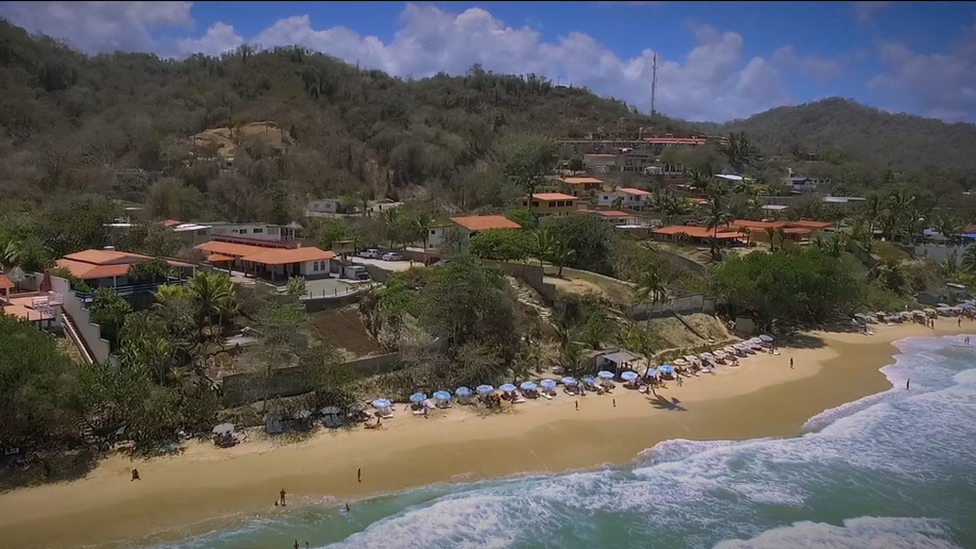 Barlovento has been a traditional vacation destination for middle and upper class Venezuelans. (Photo: Andrés Morante)

None of those idyllic images match the scenes the lifeguard is used to.

“I once saw tourists who had just arrived on the beach being assaulted at knife point. I wanted to intervene but could have gotten hurt ”.

With no urban visitors to extort or rob, now it is the area’s cocoa farmers who have to pay the gangs that have made Barlovento their stronghold.

Those who stayed here have had to adapt to the disappearance of tourism, which made the impact of the economic crisis even harder.

Quintana, for example, feeds his two children with the bananas that grow in his garden and the sardines that he manages to fish on this lonely coastline because his salary is only enough for a few packages of rice. 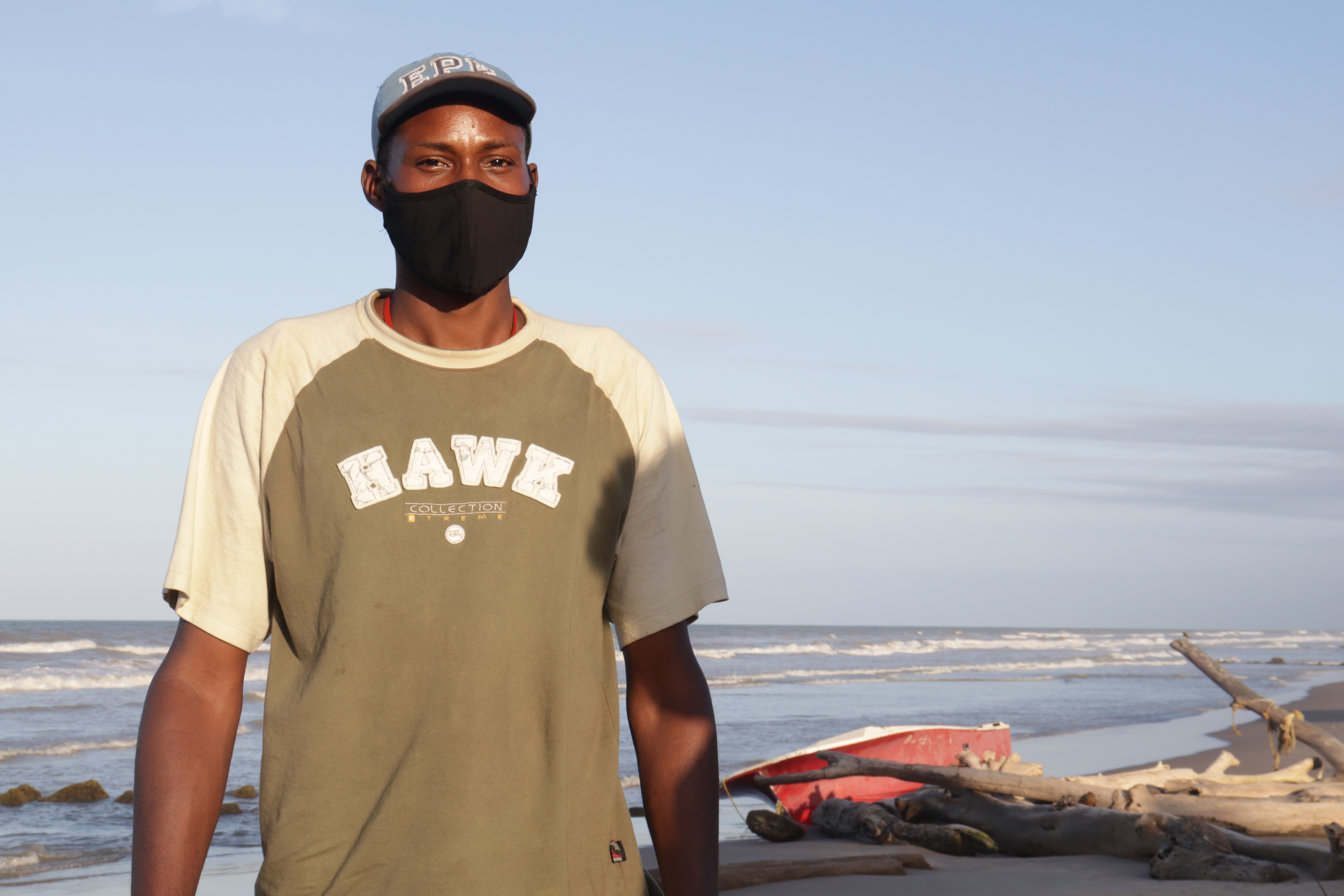 Carlos Quintana is the lifeguard on a beach where hardly anyone bathes. (Photo: BBC)

She longs for the time when things were different.

“At carnivals or on weekends, lots of tourists came and there was a lot of movement around the beach villas,” he explains, pointing with his finger at what remains of the low houses by the sea.

Quintana guides me to one of them. There is little more than the facade and the ground, but its privileged location a few meters from where the waves break and its generous dimensions give an idea of ​​its past splendor.

“The owners used to go up on the roof at the end of the day to watch the sunset and share a few drinks while listening to music,” he recalls.

When they stopped coming, the looters appeared. “They took the toilets, the doors, the windows, everything …”

And it could have been worse. “As soon as someone appears who appears to be leading a normal life, they assault or kidnap him and force him to pay extortion.”

“So who is going to want a house here?” Quintana wonders.

UN report: The government of Venezuela describes as “falsehoods” that Maduro ordered crimes against humanity