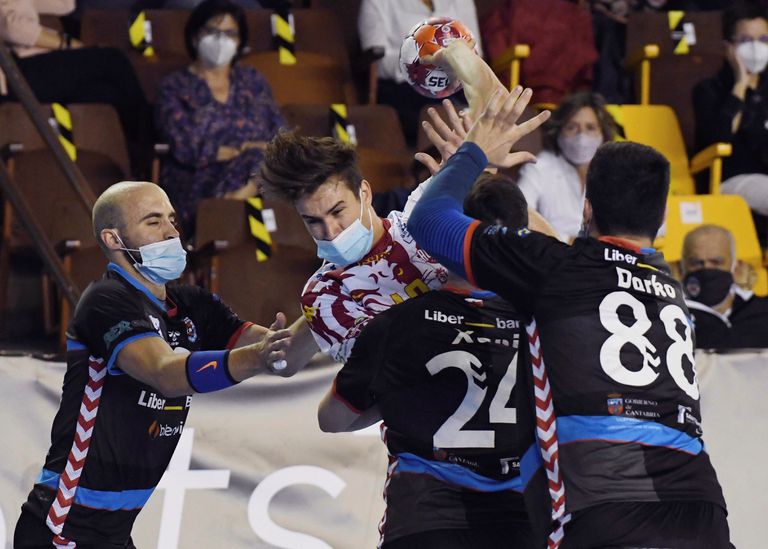 Pérez de Arce, from Ademar, attacks the defense of the Sinfín last Saturday in the first elite match in Spain with masks.J.Casares / .

The second wave of the pandemic has taken the form of a tornado in handball. Barely five weeks have passed since the new season of the Asobal League began and there are already more than serious doubts that the entire calendar can be completed, that this course has four more days because there were promotions but no relegation. The cascade of positives in the teams has been the main reason for the postponement of a third of the matches that should have been played: 24 out of 72. Half of the category has passed or is going through a lockdown, and some changing rooms have fallen almost to complete: Nava, the Segovian group of the smallest town (2,790 inhabitants) that has never played in the elite, has 17 infected; the Cuenca, 16; and Cangas, 10. The coronavirus gives no truce to a sport that has had a decade of hardships.

The disease has spread in the booths in the last seven days. Last weekend six of the nine crashes were suspended, and for this Friday and Saturday, at least another six have been canceled. Faced with this scenario, the federation is working on a document that defines what would happen if not all the duels can be held and the competition concludes with each club having played a different number of matches, which is what happens at the moment. Barcelona, ​​for example, have seven games and Benidorm, only three.

A sport with a lot of contact, played indoors and without economic muscle, possible causes of this scenario

The exact reasons for this condition are unknown with such a silent virus, although there are some suspicions. Perhaps it is the inevitable in the midst of a worsening of the pandemic, in a sport with a lot of contact, played indoors, and without the financial muscle for its protagonists to live in a bubble or to take soccer tests. The socioeconomic reality of handball causes Cuenca to have to travel to Pontevedra by bus: 800 kilometers and no less than 10 hours with stops. Like all life, although now the dangers have changed, and sharing the closed space of a coach for so long is one of them. “I think that was the origin of the outbreak,” says the president, Isidoro Gómez, who is also a doctor. And it is possible that it was also in the Nava, because 15 of the 16 players who traveled five hours by road to Irún were infected.

In Asobal, PCR is not required before a match, that only happens in European competitions. So two days before playing against El Cisne in Galicia, Cuenca performed the usual rapid antibody test on the expedition. All negative. However, already on the return trip things began to take a bad color. “After the game, Lidio calls me [Jiménez, el entrenador] and he tells me he has a fever. The next day there were more players with symptoms. We do the tests and 11 of 13 were infected ”, says the club’s top leader. A subsequent examination of those who did not suffer any discomfort raised the figure to 16.

In handball, a single infected person causes a chain problem: the locker room is confined, at least the next game is suspended, and the previous rival is alerted, who is sometimes also affected. For example, the Swan, who saw how a player tested positive after facing Cuenca. Again, the isolated squad and the clash against Logroño postponed. A vicious cycle. In this barrage of postponements, some have arrived with the visiting team already at their destination, such as Ademar in Irún; or on the way, like Huesca, which was called when it was in Aranda de Duero (Burgos) on the way to Nava de la Asunción.

This crisis places another burden on a discipline that has had a subsistence economy for years. “We have gone from a budget of 600,000 euros or something more if we were in Europe to 400,000 and something,” reveals the president of Cuenca, one of the clubs that is the second tier of the League. “We lowered their payroll to the players by 20% and we told them that if an offer came to them, we could accept it,” he continues. And so it has happened with its star Leo Dutra, who has gone to Polish Wisla. “This is a stick for handball. Our membership has dropped by half and, moreover, they only pay a quarter of last year because they can’t watch most of the games. This does not even reach us for arbitration, ”warns Isidoro Gómez.

Handball was the first sport of relevance in Spain that began to attract the public to soften the collapse of its accounts, although in very low numbers due to the restrictions of each community. The Sargal de Cuenca, with a capacity for almost 2,000 spectators, only welcomes 100 and the Nava, 200 in a pavilion of 1,100. The fall in income has been joined by the cost of health protocols. “We will spend around 50,000 euros this season on controls. But if we had to do PCR it would be unaffordable. More than 100,000 euros for the 34 days, plus intermediate tests “, details the president of Nava, Julián Mateo. The outlay in Cuenca for controls is more modest: about 15,000.

Cuenca, which is the second tier of the League, has reduced its payroll by 20% and has facilitated the exit of its top scorer

Mateo does believe that the course may be closed despite the accumulated postponements. “We have no problems playing Wednesday and Sunday,” he clarifies. Gómez, from Cuenca, is more pessimistic: “It’s going to be impossible.” Meanwhile, the Federation, in the midst of the institutional war with Asobal (the employer’s association), stresses that they have already unsuccessfully proposed to change the format (from all against all, to two groups and final phase) to reduce eight or ten days, and lighten up a calendar that doesn’t have a weekend off until April.

The pandemic does not leave handball alone, which began by delaying the first two dates while waiting for the CSD protocol, continued with the false positives of Benidorm that dislodged it from Europe, offered the image of the first elite match in Spain (León- Sinfin) disputed with masks in the face of the discomfort of its protagonists, and, continuously, this trickle of suspensions that has quarantined the entire sport.

A week has lasted the rule of Castilla y León for non-professional leagues to wear a mask. It was released by the Ademar-Sinfín players last Saturday amid protests by the protagonists, who learned about the rule that same morning. “It was not pleasant, they ended up more tired than normal,” commented the local coach, Manolo Cadenas. Three days later, the period disappeared.

Science, however, recommends its use, especially in a sport like handball. “Because of the high physical contact; increased ventilation for players, up to 200 liters of air per minute; and for being held in closed venues ”, explains the president of the Spanish Society of Sports Medicine (Semed), Pedro Manonelles. “It is true that it does not provide comfort, that it can cause a feeling of overwhelm or excess heat, but it does not affect performance. That is proven ”, warns the professor, who clarifies, yes, that the mask must be surgical and not FPP2, because in this case it does harm in high intensity efforts.