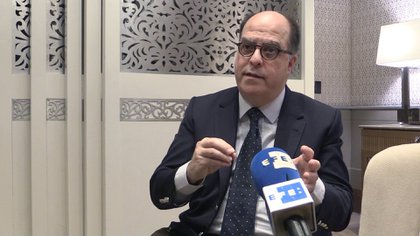 Caracas, Nov 18 . .- The Venezuelan opposition denounced this Wednesday that several Cuban companies in the telecommunications sector “have made their fortune” in the country through contracts signed with the Venezuelan state and public institutions, thus favoring both governments.
“Cubatel, Copextel, Albet and Etecsa are Cuban companies that have made their fortune thanks to contracts with state companies and public institutions in Venezuela. This has allowed the Maduro dictatorship to copy the Cuban system of political control and finance Havana” , explained Julio Borges, representative of the opposition leader Juan Guaidó for Foreign Relations.
According to Borges, it is “a mechanism to deepen Cuban penetration in the country and finance the Castro dictatorship” through these companies, which add up “more than 5,000 million dollars in contracts”, despite the fact that “they had no experience no knowledge in the area. ”
“When the contracts are thoroughly reviewed, one realizes that these companies had no experience in the area. Furthermore, they were secret contracts, which were turned away from the country and which in many cases constitute a flagrant violation of sovereignty. For example , Cuba had access to the identity system of Venezuela, “he said.
He also indicated that Havana “is the most important support for (Venezuelan President) Nicolás Maduro,” whom – he considers – has little support left.
“Maduro has run out of support. He only has Cuba, Iran and organized crime. Cuban intelligence is what allows him to persecute the Armed Forces and civil society. It is a dictatorial apparatus set up to dismantle the internal struggle of the Venezuelan people. “Borges assured.
In his opinion, faced with this situation, “the world must pressure Cuba and Maduro to achieve a transition,” he said.
In addition, he noted that from the opposition, “they will continue to insist that the international community advance in universal justice in the face of serious crimes committed by the Maduro regime.”
According to the anti-Chavistas, the president and members of his Executive are responsible for numerous crimes and human rights violations, a theory endorsed by several national and international non-governmental organizations.