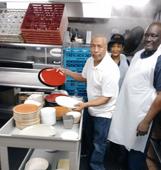 Until the final bell rings, there is hope of victory and “Manolo” – the star of a long career of more than 500 amateur fights – knows the concept like no one else.

“I never lost hope of being immortal, I knew that I had given everything for my country and if I had died without this achievement, I would be satisfied with the opportunity they gave me to defend my flag,” unbridled with joy and between tears, he narrates for LISTIN DIARIO his great life story the quintessential ring coach and symbol of La Romana city boxing.

“I feel happy, wonderful, I am a super special being because we are in the Lord and He always has surprises that touch our hearts like this one.

I thank all those who believed in my choice and God for giving me my life to see it ”, Manuel Herrera.

The Palmas is a small hotel in Miami, where ‘Manolo’ (as his mother called Manuel Herrera during his childhood), has been a dishwasher, sweeper, table organizer, waitress and above all, an honest Dominican … In this special place, he celebrated his rise to immortality with his co-workers, 22 years after his retirement. “I have never been afraid of work, after my retirement from the ring, that is what I have done with my life, working with honesty, here and in other restaurants I have served rich and poor, figures who are amazed when they see me, but that does not make me blush, I offer him a drink, a starter, a good dish and I make him feel good ”.

Sacrificial life
Fate has been consistent with Herrera, at 56 he still does not forget his barefoot walks in his native alley ‘Guaymate’ in the ‘La Shell’ sector, in La Romana.

In that muddy alley in May season, Manuel had to go out as a ‘shoe shine’ to help his mother with the daily sustenance of the house; but with that it did not add up to buying food.

“I was never ashamed to work, that’s why today I’m still in a canteen doing whatever they ask me … when I was a shoe shine, then at noon I would take off for a while, put away the shoe shine and start selling newspapers and there if I matched the chelitos to the old woman.

“After I was stronger, I went to the market and ‘wheelbarrow’ people’s purchases from one place to another and took them home if it was not far away … I looked for food from the house like a bull”, he proudly recalls who in 1983 became the Dominican Republic’s first youth world champion in any sport.

Only child of Dona Lila
Herrera’s feelings and vicissitudes could have many meeting points, but being Lila’s firstborn and only child gave him strength to face life and from an early age to try to change the environment of poverty that surrounded him with his mother.

Mrs. Lila Isabel Herrera, whose last name she preferred to bear and take on the challenge of being her only begotten, is the lamp of her life.

“My father lives in Barahona and he has like five other brothers of mine; but Lila only has me and I her;

“I have seven children, only one female, three in our country, and four in Miami,” he says.

“They are of legal age and independent. Guess, I have to return to my country to reunite permanently with Lila and give her all my attention, I have spent more than half of my life abroad, “said Manuel Herrera, sorry,” Manolo.

KNOW MORE
A race for history
Exceptional
He has been one of the greatest Dominican athletes of any discipline during the 1980s and 1990s.

Milestone
In the Amateur Youth World Cup, she became the first Dominican to win a gold medal in this type of event.