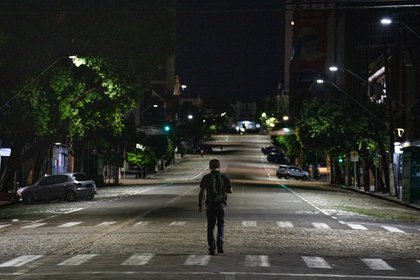 A curfew between 10 p.m. and 5 a.m. the following day begins to rule this Friday in Bahia and for a period of seven days, only the movement of people and vehicles for essential activities will be allowed at that time. . / Raphael Alves / Archive

Rio de Janeiro, Feb 19 . .- The entry into force of curfews in Ceará and Bahia to reduce the spread of covid raised to five the number of Brazilian states that have adopted the drastic measure to face the pandemic, at a time when the country suffers a second more virulent wave and the circulation of new variants.
A curfew between 10 p.m. and 5 a.m. the next day begins to rule this Friday in Bahia, the fourth most populated state in Brazil, with 15 million inhabitants, and for a period of seven days it will only be allowed in that schedule the movement of people and vehicles for essential activities.
The same measure began to take effect on Thursday night in Ceará, also in the northeast region of Brazil and the eighth most populous state in the country (9.2 million inhabitants), where the curfew will also extend for a week. .
Amazonas, a state in northern Brazil that has been facing a serious health crisis for a month due to the lack of beds for patients with covid and oxygen for those who require a mechanical respirator, adopted a more severe curfew two weeks ago, between 7:00 p.m. hours and 6:00 the next day.
And Mato Grosso do Sul, in the west and bordering Paraguay and Bolivia, also imposed it two weeks ago but for the most populated cities of the state, including the regional capital, Campo Grande.
Paraná, a southern state on the border with Argentina and where the curfew will apply until February 28, the measure is also less restrictive, since the movement of people and vehicles is prohibited between 00:00 and 5:00.
In these five states, almost a fifth of the 27 states of Brazil, circulation at night is only allowed for workers in essential sectors such as health and safety, while all commerce, restaurants and bars have to remain with their closed doors.
While in the state of Amazonas the hospital system has already collapsed, in the other four states, with the sharp increase in infections in recent weeks, the occupation of beds in intensive care units exceeds 90%.
With the restrictive measures, regional governments are trying to reduce the spread of the covid, which in Brazil has left about 244,000 deaths and 10 million infections just one week after completing the first year of the first official case, registered on February 26, 2020 in the state of Sao Paulo, which was also the first in Latin America.
These data confirm Brazil, with its 210 million inhabitants, as the second country in the world with the highest number of deaths from the coronavirus, after the United States, and the third with the most infected, after the North American nation and India.
The resurgence of the pandemic coincides with the proliferation of new variants, including the P1 strain, originally from the state of Amazonas, which the Ministry of Health has assured is “three times more contagious” than the rest and is already circulating native to states such as Sao Paulo, Rio de Janeiro and Bahia.
With an average of deaths that has remained above 1,000 a day for more than a week, only on Thursday there were 1,367, the pandemic continues to worsen in the Latin American giant while vaccination advances slowly.
Brazil vaccinated about 5.5 million people, less than 3% of the population and mostly doctors, Indians and the elderly, but several municipalities had to suspend their immunization campaigns due to lack of vaccines and the Government only foresees the next deliveries by the end of February.
The Minister of Health, Eduardo Pazuello, announced this Friday that the Government will distribute 4.7 million vaccines between the end of February and the beginning of March, and asked the mayors to apply all of them in the priority population without reserving the necessary second doses, to accelerate the immunization campaign.
According to Pazuello, as the Ministry will receive 21 million vaccines in March, the distribution of the batches for the second dose is guaranteed on time.