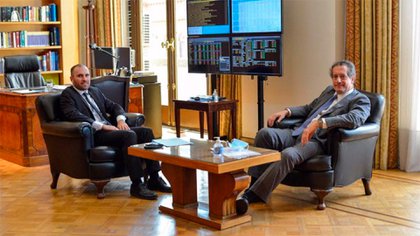 The probable signing of an Extended Fund Facility agreement with the IMF during the summer will complete the definition of the government’s new economic roadmap in a long document.

The conceptual and practical turn of the Government could be quickly summarized in two sentences of the Minister of Economy. At the first press conference, Martin Guzman He said: “If we have a large deficit, we should resort to monetary issuance and that would be destabilizing.” The second sentence occurred a few days ago: “Today is not the time for an IFE 4 because it is necessary to maintain certain balances to also protect the activity, protect the people, the whole country ”.

As a result of the outbreak of the pandemic and the introduction of quarantines throughout the world, the level of economic activity and consequently revenue, fell sharply during the second quarter of the year. Likewise, all countries increased public spending to strengthen the health system and protect the most affected households and businesses.

The difference between Argentina and the rest of the world did not go through the increase in the fiscal deficit, but because of its form of financing. Without access to external credit due to the restructuring of the public debt in hard currency and the slow reconstruction of the curve in pesos, there was no choice but to cover the red with issuance. As the brand new minister mentioned, the issue destabilized the foreign exchange market: The excess of pesos and the greater demand for foreign currency due to the growing uncertainty unleashed an exchange rate run that accelerated after the tightening of the stocks in mid-September.

Towards the end of October, the economic team managed to calm the exchange rate waters a bit following a shift in economic policy that included:

1. Stimulus to the supply of foreign exchange (temporary reduction of withholdings and gap;

2. Greater filters and controls on imports (BCRA plus Ministry of Productive Development);

3. Greater fluidity in the financial dollar market, but also greater intervention through the sale of sovereign bonds and requests for information from participants;

Four. More aggressive financing strategy of the Treasury (at the risk of issuing debt tied to the dollar or dollarized to give an escape route to large funds that invested in bonds in pesos);

5. Negotiate extended facility agreement with the IMF to be signed by Congress; Y

6. Greater fiscal astringency that is condensed in the refusal of Minister Guzmán to IFE 4 to take care of the balances, but also in the last adjustment of pension assets by decree (5%) and the new mobility formula proposed by the Executive Power.

A separate paragraph deserves the monetary policy that continues to be accommodative. The BCRA assisted the treasury when it needed it, trying to sterilize a large part of what was issued, but kept interest rates only aligned with the inflation expectations. It is true that in recent weeks nominal increases were observed, but they did not change the ammeter in the face of high expectations of devaluation. 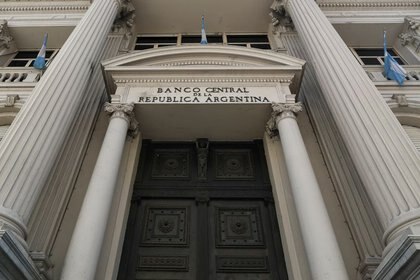 The BCRA assisted the treasury when it needed it, trying to sterilize a large part of what was issued, but kept interest rates only aligned with inflation expectations (.)

Finally, the letter from Cristina Fernández de Kirchner endorsing an agreement with all the actors and clarifying that the one who makes the decisions is the President (to strengthen him but also to uncheck him), the simultaneous lifting of two land seizures and a greater centrality of Guzmán In economic management, growing exchange rate pressures eased at the end of October.

However, tensions persist: the BCRA continues to lose reserves (net and gross) in November and parallel prices rebounded after approaching the solidarity dollar (30% PAIS tax plus 35% on account of Profits). In addition, the fiscal adjustment policy is generating social tensions and in the governing coalition in a very complex context: we are going to suffer one of the worst recessions and we are among the countries most affected by covid-19 in terms of infections and deaths per million habitant.

So far the process that led the authorities to apply an economic policy to moderate the existing monetary and exchange rate imbalances. This fiscal approach is shared by a good part of economists, but there is not much consensus regarding monetary policy (an orthodox approach requires positive real interest rates) and on the exchange front there is only agreement that a strong devaluation would have a high cost social in the short term. 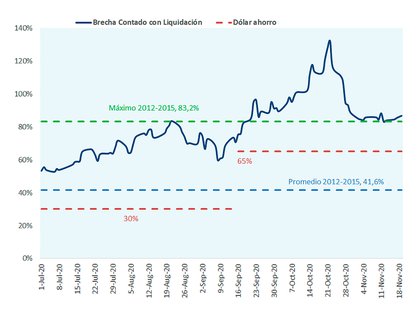 But nevertheless, the exchange rate strategy to get out of the current crisis is crucial. There is international (and local) evidence that a Competitive and Stable Real Exchange Rate accelerates growth by propping up investment and job creation in the tradable sector, key variables to overcome external restrictions and promote inclusion and social equality.

Today there is a Stable RER (the official parity for foreign trade slides in line with inflation) but it is not Competitive. The fact that the multilateral RER is around the historical average (which starts in 1997) indicates, in the best of cases, that there is no exchange delay. Also, said statistic hides that Argentina is 20% appreciated compared to Brazil, the main destination of industrial exports. Given that, thanks to Mercosur, there is preferential access to the gigantic Brazilian market, can the country afford the luxury – especially at the industrial level – of sustaining a bilateral backwardness?

Likewise, In the short term, can we aspire to a rapid recovery with minimal net reserves at the BCRA and a tangle of exchange restrictions? that are synthesized in a gap that borders 100%? This high gap is incompatible with the normal functioning of the economy, drowning the tradable sector and investment possibilities. For example, what incentive did the reduction of three percentage points in soybean withholdings represent in October if the exchange gap averaged 100 percent during that month?

Finally, the high cost associated with the sale of sovereign bonds by Anses and BCRA (they are decapitalized and the public debt in hard currency in private hands increases) to lower parallel prices can only be justified if the gap is reduced by below 50% (improves economic performance, although the best would be to eliminate it). Not having backtracked with the 35% advance of Earnings, implied wasting efforts because the floor of the gap is very high (65%): it is no coincidence that parallel prices have rebounded when they approached the solidarity dollar.

The high cost associated with the sale of sovereign bonds by Anses and BCRA (they decapitalize and the public debt in hard currency in private hands increases. (Source: Ministry of Finance)

In summary, a positive proposal on the exchange front should include: improving the RER to make it Competitive and then Stable (A reference to the magnitude of the correction is given by the delay with Brazil); reduce the gap floor by eliminating the 35% advance on Earnings; activate the sale of sovereign bonds in the financial market when the gap exceeds 50%, and lower restrictions on the financial dollar (or dollar banknotes) to speed up transactions in a context of decline – but not disappearance – of the gap.

Reduce the gap floor by eliminating the 35% advance on Earnings; activate the sale of sovereign bonds in the financial market when the gap exceeds 50%, and lower restrictions on the financial dollar

The greater fiscal astringency, a temporary rate hike to stabilize the official market after the exchange rate correction and the reduction in parallel prices would allow the gap to be reduced to less than 50%, reestablishing exports / currency settlement.

If this happens, the Central Bank could accumulate reserves again: improving the repayment capacity of hard currency debts. Minimizing the initial cost on unprotected sectors and achieving political consensus will be key to benefiting from a sustained recovery with social inclusion, thanks to increased investment and job creation.

The author is an Economist, partner and Director of Ecolatina

What Alberto Fernández said about the increase to retirees, the dollar and the new wealth tax