It is the most interesting project, and most important, that the British Morgan have in hand for 2021. It is the Morgan Plus 8 GTR, an exclusive model that has just been advanced with some sketches that show the retro style in a coupe with an aesthetic very radical, and even more performance and behavior.

Those of Morgan have an important novelty prepared for 2021. The British firm has advanced a couple of sketches already advancing the official presentation of what is going to become the most exclusive model in the offer. Because, it will only be nine units those that will come out of the artisan workshops of the United Kingdom, from next summer.

A special project, and interesting, because this project of the Morgan Plus 8 GTR was in one of the drawers that collect dust and thousands of other things, from three years ago it was canceled. The manufacturer himself has admitted that the development has been launched when the brand has managed to recover a series of Morgan Plus 8 units that were manufactured before 2018, were sold and not used for no purpose. 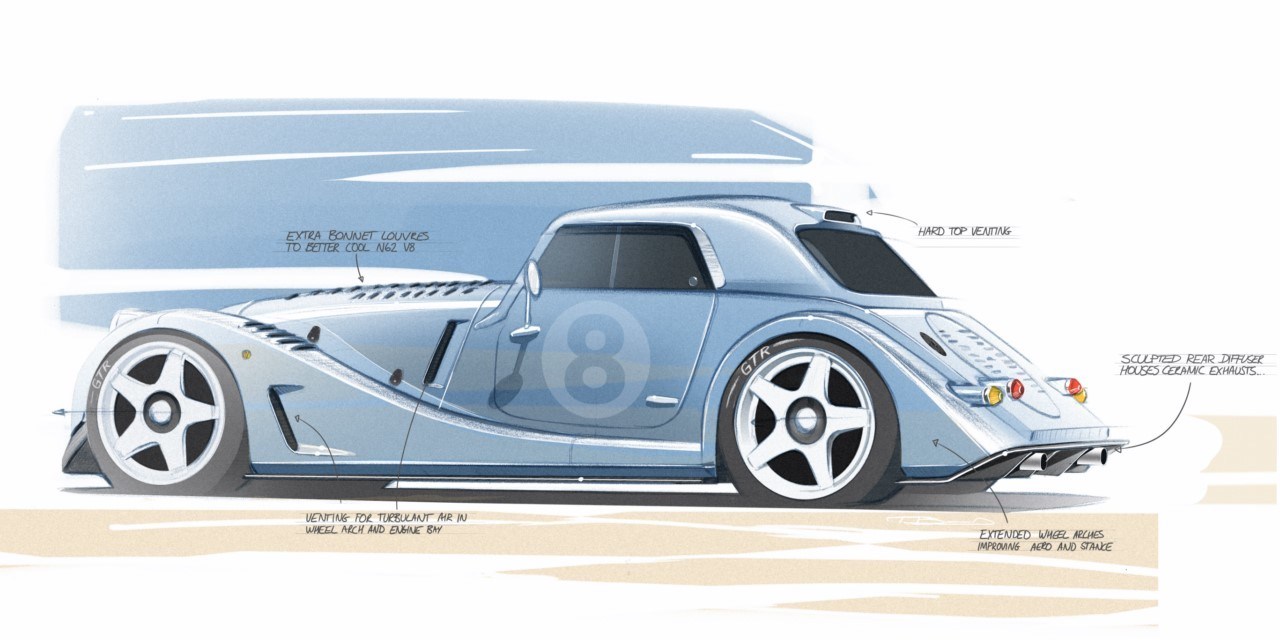 A aluminum chassis that have been revised more thoroughly by replacing some of the components, to transform the dynamic behavior into that of a more radical authentic sports car. A style that will also carry over the body design, with the typical retro design typical of Morgan, with a long hood and a very set back cabin covered with a hardtop. The glarge alloy wheels are housed in large fins. The rear continues to show off the style of the Morgan Plus 8 GT of the 90s.

The Morgan Plus 8 GTR has racing wheels, with a five-spoke star design, and only one central locking nut. One more detail that shows an excellent level of sportiness. Morgan sources have indicated that the green light for this project is one more of the Aero GT, SP1 and Aeromax, pointing out that it will not be the last, but the announcement of other more special ones that will be announced this year.

Morgan acknowledges that newer and more efficient powertrain technologies will not be present in the new Plus 8 GTR. Once again he will ride a powerful BMW V8 petrol engine, 4.8-liter naturally aspirated block known internally as N62. A propellant that the Bavarians stopped using in 2010, used in the first generation of the X5 and in the controversial Bangle 7 Series. At the Morgan he will offer 400 HP of power, associated with a 6-speed manual -or automatic- gearbox.