The American firm has unveiled a few hours ago the new GMC Hummer EV in SUV body format. The closed body variant of the electric Hummer range will hit the market shortly after the open rear cradle variant.

The official presentation of the new GMC Hummer EV SUV It took place a few hours ago and we can describe the moment in just two words. No surprises. The new closed body variant of the electric Hummer range has turned out to be just as we expected, a model exactly like the GMC Hummer EV pick-up we already knew but with a somewhat longer roof and a vertical tailgate.

So except for the maximum power of the highest version, this new variant does not present any real noteworthy novelties, it is only a derivative with a closed body of the huge off-road that was presented last year in an open rear cradle or pick-up format. up. The new SUV maintains the same aesthetic features and even the design accessories of its range brotherBut it adds a considerably thicker C-pillar, a large side rear window and a slightly slimmer rear pillar, as well as a fairly vertical rear window and a spare tire on the tailgate.

Inside we find the same dashboard.

In the interior we do not find any relevant news either, as the new GMC Hummer EV SUV has the same technological dashboard as its pick-up brother, which has a large central tunnel and a huge 13.4-inch screen floating above the center console. Behind the multifunction steering wheel we also find the 12.3-inch digital dashboard. The passenger compartment can also be convertible thanks to the presence of the removable roof panels of the system Infinity Roof, which of course, in this new SUV variant adds a new rear panel for the rear area.

The Hummer EV SUV continues to maintain the 5-seater configuration of its range brother and the company for now has not discussed possible variants of 3 rows of seats, despite the fact that by size it can easily accommodate an additional row. Although the truth is that the brand has only revealed a few images of the model and we do not have any of the rear area of ​​the cabin. It is expected that in the coming days new data and graphic material of the SUV will be unveiled.

The new GMC Hummer EV SUV will have the same air suspension system featured on the Hummer EV pick-up that thanks to the Extract mode It is capable of raising the vehicle height by an additional 149 mm to avoid obstacles and it reaches a maximum clear height of 400 mm, also allowing a wading height of 813 mm. It also has a directional rear axle and therefore, with the curious ‘Crab Mode’ or Crab Walk system. The frame configuration is completed with wheels shod with 35-inch Goodyear Wrangler All Terrain MT off-road tires, which can be 37 inches and also mount a beadlock locking system for the most extreme off-road users. 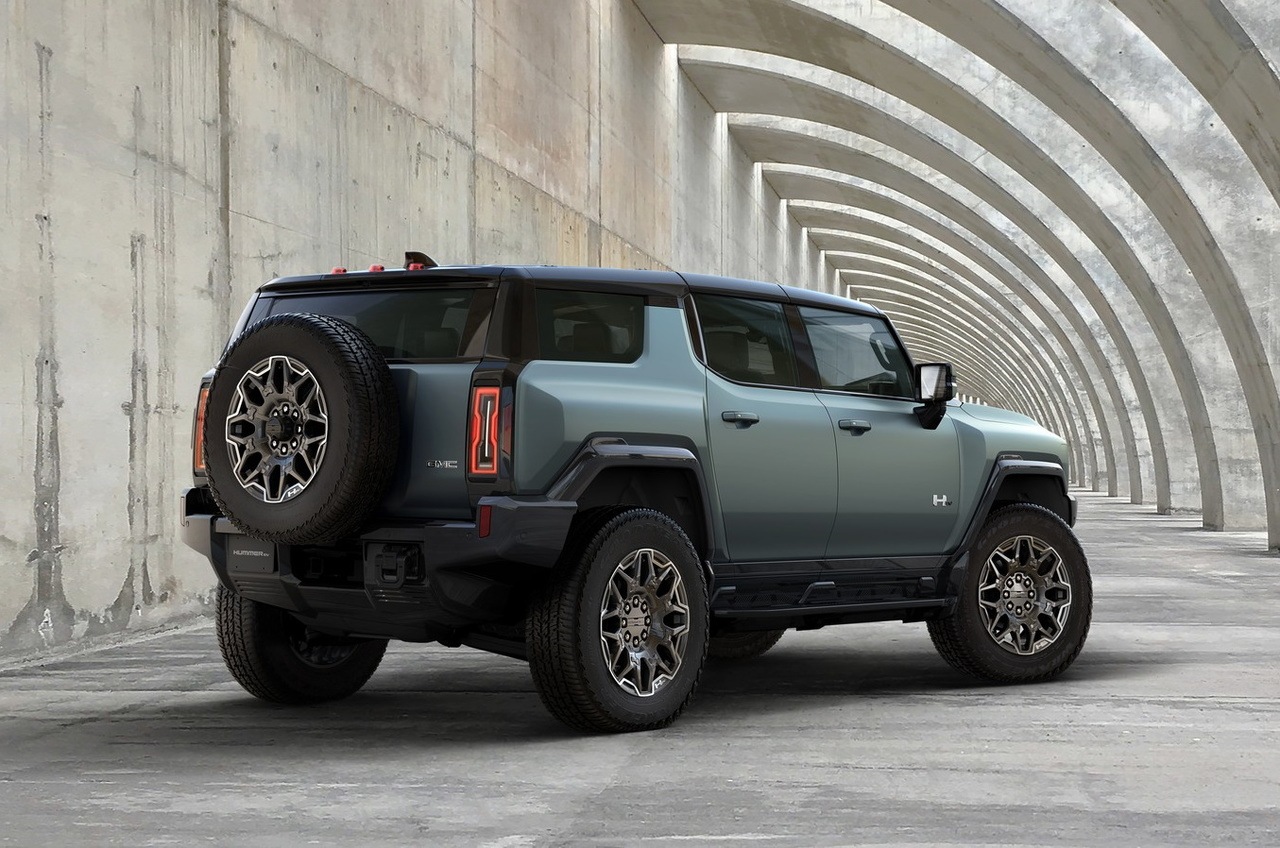 The rear is your most personal view.

In the technological chapter, the system stands out Ultravision, which mounts 18 cameras on the outside to assist the driver not only on the road but also off the asphalt, as it includes cameras on the underside of the vehicle. And the latest generation of the Super Cruise driving assistance system with hands-free function. The Hummer range is the first from the GMC label to launch this system.

On a technical level, we only found a difference between the new Hummer EV SUV and the pick-up variant, despite the fact that both are based on the same BT1 platform – the one used by GM for its full-size electric vehicles – and use the same propellants. and latest generation Ultium batteries from the company, for any unspecified reason, andThe SUV does not have a version of 1,014 CV (1,000 hp) but of 842 CV (830 hp). For the rest, the range will be made up of the same versions of two and three electric motors, so we will only find all-wheel drive versions, with powers of 634 CV (625 hp) and 842 CV (830 hp).

As for the batteries, we find the possibility of mounting packs of 16 and 20 Ultium modules of which their capacity in kWh has not been revealed, but their estimated autonomy according to the EPA cycle. According to the data of the brand, the Hummer EV SUV versions are capable of reaching a maximum range of autonomy more than 400 kilometers in the 16-module version and more than 480 kilometers in the versions equipped with the 20 module pack. However, if the latter mount the Extreme Off-Road Package option, the autonomy can go down to 450 km.

Like the mechanical range, the price list will be identical to that of the pick-up, including the special launch edition Edition 1, which will be available with or without the Extreme Off-Road Package kit. The first version will hit the market in early 2023, Edition 1, and the rest of the versions will follow in the spring of that year, except for the base version, which will not be available until a year later.