The new of Alexandre Aja It is called ‘Oxygen’ and it is a race against time in which Mélanie Laurent gives us one of the best performances of the year. The 30 best suspense movies and thrillers on Netflix.

‘Oxygen‘It is not the first film that manages to tell a suspense story in a small space (nor will it be the last), but of course it knows well how to use everything it has at hand and twist the story enough to have us counting how many minutes of oxygen is left to the protagonist. The person in charge is Alexandre Aja, known in the lares of terror and gore thanks to films like ‘High Tension’ or the recent ‘Underwater Hell (Crawl)’, but, With this sci-fi thriller released on Netflix, the Frenchman refines his tools and play to reveal layer by layer the mystery that he has mounted. The secret is, as always, in asking the right questions.

A woman (played by Mélanie Laurent, director and actress that many will recognize for that time when she burned hundreds of Nazis in ‘Inglourious Basterds’) wakes up in a cryogenic chamber. The operating system that manages it, which responds to the name of MILO (to which it puts voice Mathieu amalric), informs you that you only have less than 40% oxygen left and that the number is dramatically decreasing. Time of life? Little more than an hour. And that is if you are calm and do not consume more than necessary. The worst thing is that the protagonist she can’t remember anything about herself: not her name, not her past life, not what the hell she’s doing in there. Her only alternative is to use the tools around her to survive. To say nothing more than these lines about the plot would be to ruin the surprises the film has in store. That they are not few.

Immediately ‘Buried’ by Rodrigo Cortés comes to mind, in which we saw Ryan reynolds buried underground in a wooden coffin trying to figure out how to get out, or even ‘Locke’ by Steven Knight, Where was it Tom hardy who, inside a car and with only phone calls, put us in a tension of confinement and mystery. But ‘Oxygen’, although it shares his taste for closed spaces and also leaves the interpretive weight on its protagonist, proposes other different paths. And above all, assigns her a partner, who, although not made of flesh and blood, does help her overcome more than one obstacle on your adventure for survival.

With MILO, the dynamics are the same as those of the ‘Who’s who’ or ‘Who am I’ game: the important thing is not the answers, but the questions. The computer has everything Laurent needs to uncover the truth and even save his life, but it won’t reveal it unless she points directly where it belongs. The actress is splendid, and thanks to her facial expressiveness we see how her character’s mind goes a thousand an hour, incessantly trying ways to get where she needs to go, breaking down to cry inconsolably and then compose herself and launch orders left and right with the forcefulness of a born leader who knows what to do. All of this is both an emotional and a process full of more or less predictable narrative twists, but equally effective. 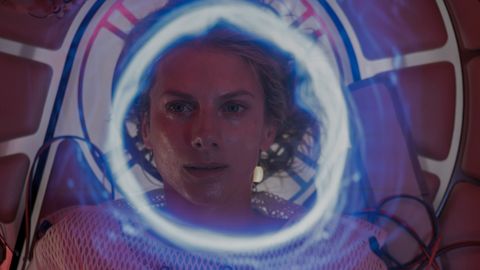 The progressively decreasing oxygen levels work narratively as the ticking of a race against time. Aja, with no more visual aid than the technological elements of the capsule (especially, the disturbing main screen that works as both a window and a reflection) and some recurring ‘flashbacks’ that appear erratically in the memory of the protagonist to remind her who she is , has to put the weight of the film on Mélanie Laurent, who not only supports it, as we pointed out before, but also turns monotony of images into a coherent and satisfying journey.

Shot during confinement by the expansion of Covid-19, it is impossible not to see parallels with the current situation, between lethal viruses and forced confinements. Also in the fact that the core of his story is based on the feeling of isolation, loneliness, survival and an uncertain future. But they are purely anecdotal coincidences (the project was before the pandemic) that simply make the production of a certain topicality. You don’t need it though: ‘Oxygen’ stands on its own as an immersive thriller with sci-fi touches, a terrific lead performance, and a minute-by-minute story to marvel at. Wow, perfect to take our breath away.