Going from less to more, FC Barcelona has signed on the track at Hereda San Pablo Burgos (77-93) his sixteenth consecutive victory in the Endesa League and follows two of the leader Real Madrid, whom he will receive next Saturday at the Palau.

Sarunas Jasikevicius was quite satisfied with the work of his players despite initial doubts and did not even value his disqualification by receiving two techniques in a meticulous refereeing performance that also pointed out techniques to Joan Peñarroya and the local bench.

“I have to congratulate our fans and our guys for a job well done, especially in the second part. We came out a bit cold and we didn’t have the same concentration as Burgos, “admitted the Barcelona coach.

“From the half of the second quarter we played a very good basketball with ups and downs, as is normal in a week with three games and also with very long trips, “Saras continued.

“The most important thing in these situations with so much load is to get the games forward and the boys have done it against a team that is playing great basketball and that will surely aspire to everything this season, “concluded the Lithuanian.

In a similar vein, Pierre Oriola He admitted that it was a “difficult game. We started very weak and they set the pace. We were out of everything we had talked about, but in the second half we have imposed more physique, we have tightened the defensive lines more, we have been more aggressive and we have moved the ball better. “ 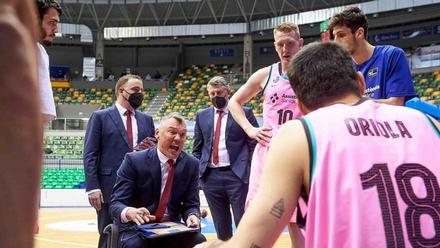 Jasikevicius, giving orders to his players

“It’s a shame that at the beginning of the season we missed some games, but we have Madrid two victories away, we are still alive and we can aspire to the first place, although everything happens to follow week after week and try to win the classic “, added the Barcelona captain.

The Balearic Àlex Abrines agreed that the first part “was a bit complicated. We came from two very strong Euroleague games and we were a bit ‘broken’, but after the break we increased the intensity and we knew it was a very important game to get to the El Clasico two victories from Madrid “.

“In the first half we made mistakes in defense and then Kyle was very fine, we have scored better and we have been gaining confidence to close the week with the second win in a row, “added the former Oklahoma City Thunder.