Associated European Motorists analyzes which are the most dangerous roads in our country and the ones that the DGT monitors the most.

Summer comes every year with heat, vacations, weekends at the beach and in the towns … and, unfortunately, with a rebound in the number of accidents, injuries and deaths on our roads. To avoid this, the DGT works by remembering the dangers of speeding, the driving distractions and alcohol consumption.

But there is another risk factor when we get behind the wheel and that is the road itself. Because either due to poor maintenance, poor construction or higher traffic than expected during planning, there are roads that accumulate the most minor and serious accidents on our roads.

To know them, Associated European Motorists (AEA) has produced a report – In the link you have a breakdown by Autonomous Communities – in which it collects which are these routes that multiply the national average with risk of suffering an accident several times, taking as a reference the data referred between 2015 and 2019. In total, there are 82 routes in which there has been a danger index 10 times higher than the average and that accumulate 1,685 accidents and 2,523 victims.

The most dangerous roads

After this report, it has been concluded that the most dangerous section in Spain is still kilometer 12 of the A-55 road in Mos, Pontevedra. In the last five years, there have been 108 accidents and 194 victims. However, its dangerousness index has dropped so much in recent years that, luckily, it is no longer among the routes with the highest risk of suffering an accident.

Of the roads that have claimed the most victims in recent years and those that accumulate the most accidents, follow the A-55 on kilometer 0 of the A-77a motorway in Alicante, with 100 accidents and 128 victims, and the kilometer 17 of the T-11 highway, in Tarragona, with 95 accidents and 155 victims. 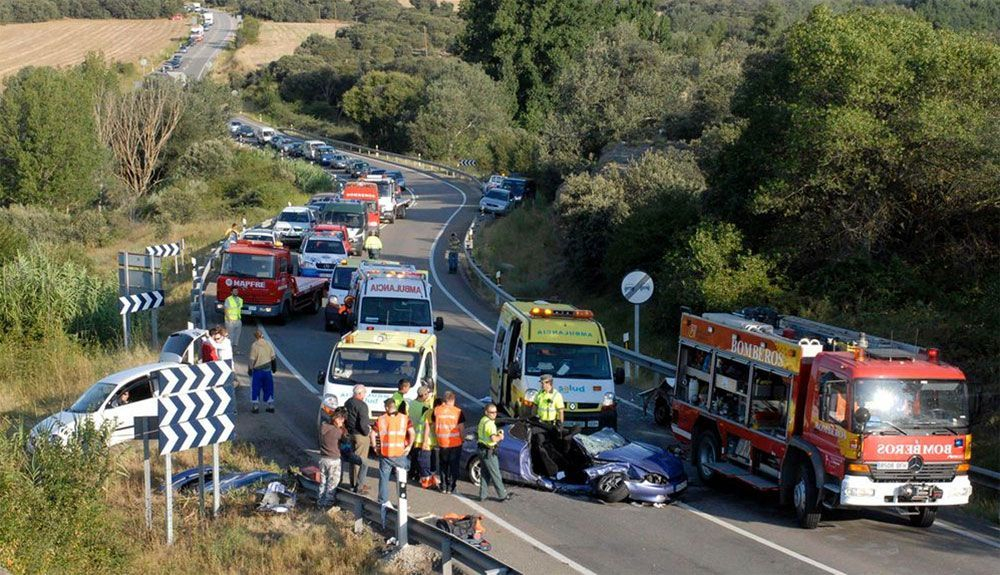 If we attend to danger indexOf the 500 sections located, 51 of them were already repeated among the most dangerous and 39 have worsened their dangerousness index. In total, these 500 sections that exceed 10 times the national average of danger index have been counted 1,685 accidents and 2,523 victims, most of them slightly injured.

With this last piece of information, the highest risk of suffering an accident in Spain occurs at kilometer 245 of the N-2, in the province of Zaragoza, whose dangerousness index is 686 times higher than the average. Even the toll roads, the safest according to AEA to circulate, register in some sections higher than average risk indices, such as the one located in Toledo at kilometer 20 of the AP-41, which exceeds the national average by 43 points. Regarding accidents and the number of injured and deceased, the section located at kilometer 146 of the AP-7, in Barcelona, ​​is the one with the highest figures, with 95 accidents and 161 victims, the majority slightly injured (159).

The roads most guarded by the DGT

In addition to the report prepared by AEA in which it is studied which are the roads that present the most accidents, injuries, deaths and dangerousness index, it also published another of which we echoed recently detailing which are the Spanish roads in which more fines are imposed.

Throughout this report, we detailed which are the roads where the radars are more efficient and accumulate a greater number of complaints in our country. A) Yes, The most guarded point in Spain is the one located at kilometer 246 of the A-7 as it passes through Malaga (48,771 complaints), followed by kilometer 478 of the AP-7 in Valencia (47,711 penalties) and kilometer 13 of the A-4 in Madrid (37,316 penalties).

In addition, to these fifty roads we must add all the means that the DGT has put in place for the August operation. To all the radars we must add the drones, cameras, helicopters, agents and controls that the agency will put to full performance this summer. So on our roads we will find during the summer:

The use of 216 cameras to monitor the use of the seat belt and the mobile phone behind the wheel. Use of the 15 camouflaged vans to also control the most dangerous distractions. Surveillance and regulation of traffic from the air, with 12 helicopters and 39 drones that the DGT already has.