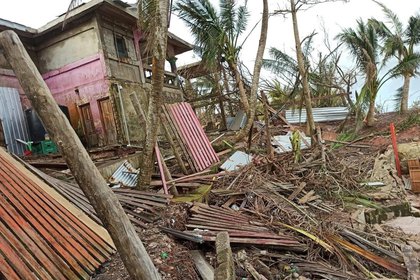 Managua, Nov 19 . .- The sun shines on Nicaraguan soil after the passage of the powerful hurricane Iota, but this Thursday, contrary to the days after Eta, the spirits are not optimistic in the city of Bilwi, on the Caribbean coast Nicaragua, one of the most affected by the impact of both cyclones, barely 13 days apart.
“The mood is on the ground,” 20-year-old Randy Casanova confided to Efe, who has dedicated the last few days to repairing his house and that of family or friends, in a central street in Bilwi, located north of where Eta hit. last day 3 and Iota last Monday.
In the absence of a damage count, it is already confirmed that the city was almost completely razed: there are trees and utility poles knocked down in the streets, debris inside and outside the family plots, little remains of the municipal stadium and the pier that It gave meaning to the name of the main city of the Northern Caribbean Autonomous Region (RACN), Puerto Cabezas, it was totally destroyed.
The manager of Risk and Emergency Management of the Catholic Relief Services organization in Nicaragua, Cairo Jarquín, an expert on disasters, confirmed that “there is a lot of destruction, a lot of impact on housing, its water supply system, social infrastructure, centers health, schools, temples ”
“All that which means what constitutes the social infrastructure, cultivation areas in the areas furthest from the sea,” he said.
Only Eta left losses of 178 million dollars, equivalent to 1.5% of Nicaragua’s gross domestic product (GDP), said the Minister of Finance and Public Credit, Iván Acosta on Thursday.
Of these, 15 million dollars correspond to 1,890 homes that were destroyed, and 8,700 partially damaged, throughout Puerto Cabezas, including Bilwi.
THEY LIVED MOMENTS OF PANIC AND FEAR
“With Eta the experience was ugly when the roof of the house was detaching us. It was horrible. Panic, fear, attacked us, but Iota came with stronger rain and winds, it was a horrible moment. There are many people who did it. he’s regretting it, “continued Casanova.
Like many families in the RACN, Casanova’s family did not tremble in a corner to wait for the gale to pass, but faced adversity.
“We went up to repair the zinc (roof) at midnight, but it was not a good idea, the zinc was flying through the air, it was dangerous,” he said.
However, like many, the Casanovas lost the battle to two category 4 colossi on the Saffir-Simpson scale (the Iota reached category 5, maximum, before its eye hit the ground).
“He damaged the roof and blew out the windows. Thank God our house is made of concrete, because the normal thing is that here they are made of wood,” he lamented.
Nothing is known about the coastal communities, especially Haulover, where it made landfall, despite the fact that three days have passed since the impact and one that Iota vanished.
Jarquín described the impact of Eta in the area as “strong”, and with Iota the social infrastructure worsened.
“Many communities, speaking of the coastline, all those that are on the coast of the sea, where these two hurricanes entered, I believe that there should not be much left standing, what little could have been of Eta, Iota must have devastated it, including livelihoods, it is not known if they will find them, “said Jarquín.
Some 38,000 people are in 250 shelters in Bilwi, they are alive, they have food, but not much more.
DEFICIENCY AND DEMANDS
“Wherever I live there is a shelter, they bring them food, but not enough, those people were left with nothing, only with what they are wearing, where are they going to go if they don’t have a house,” Bilwi resident Azucena Hompris told Efe .
Groups such as the Independent Observatory COVID-19, made up of doctors and volunteers, have warned that the authorities do not provide the conditions to prevent the spread of the pandemic in shelters, since, in addition to overcrowding, masks or alcohol are not distributed and the Clean water with slump are not guaranteed.
Jarquín warned about the less obvious damages: “The impact of two hurricanes in a row accumulates damages. If you had a home with the possibility of repairing, you are happy, but then the other one takes it away, the emotional impact is strong.”
“The Eta left my house on one side, I took out a loan and we repaired it, but the Iota came and bent it on the side that we had not reinforced, it was hard, because we need food, but my family lives off the sea and right now there is no way out ( work), “Hompris noted.
“Everything is more expensive, and the aid that comes is only distributed among the Sandinistas (ruling party),” he said.
Hompris’ statement coincided with the denunciations of opposition groups, which also called on Nicaraguan society to disobey the government and organize to help the survivors of both hurricanes.
Meanwhile, the Government, which has recognized 18 deaths in both disasters, at least three less than those reported by other sectors, has reiterated that “the important thing is to save lives, because the material is replaced.”
“Let them come and see with their own eyes, how many people were left with nothing, how these people are going to do, not to say that the material is recovered”, Hompris replied.