An international team of scientists, led by researcher Paolo Giacobbe from Italian National Institute of Astrophysics (INAF), has studied the chemical composition of the atmosphere of an extrasolar planet in unprecedented detail.

The presence of water, carbon monoxide, hydrogen cyanide, methane, ammonia and acetylene in HD 209458b’s atmosphere shows that it is richer in carbon than oxygen, indicating that this exoplanet has formed at a greater distance from its star. central and then has approached

Their study, published in the journal Nature, has revealed for the first time the simultaneous presence of six chemical components (water, carbon monoxide, hydrogen cyanide, methane, ammonia, and acetylene) in the atmosphere of a hot Jupiter-like planet: HD 209458b, which orbits the star HD 209458 in the constellation Pegasus about 150 light years from our solar system.

The presence of these molecules indicates that the planet’s atmosphere is richer in carbon than oxygen, which is why, according to the authors and current models, HD 209458b has formed at a greater distance from its central star and later migrated. to its current position, closer to it.

The discovery has been possible thanks to observations made with the instrument GIANO-B installed in the Telescope Nazionale Galileo (TNG) in Roque de Los Muchachos, in La Palma (Canary Islands), and then combined with an innovative data analysis technique.

HD 209458b has a lower density than Jupiter and orbits its star at a distance slightly greater than 7 million kilometers (twenty times less than the Earth-Sun distance). This makes the planet’s temperature very high, around 1200 ° C.

Its orbital period is only 3.5 days, which facilitates the observation of the exoplanet by means of the transit method. As the planet passes in front of its star, the light coming from it filters through the atmosphere, allowing us to observe the characteristic traces of the molecules that form it.

Specifically, the team has collected data during four planetary transits of HD 209458b, observing with GIANO-B in the part corresponding to the near infrared of the electromagnetic spectrum.

The transmission spectrum allowed astronomers to study the composition of the planet’s atmosphere along the line that separates the part illuminated by its star from the unlit part on the planet, known as terminator. The spectra carried out with GIANO-B made it possible for the first time to simultaneously identify the six molecules in the atmosphere of HD 209458b thanks to the thousands of spectral lines obtained. 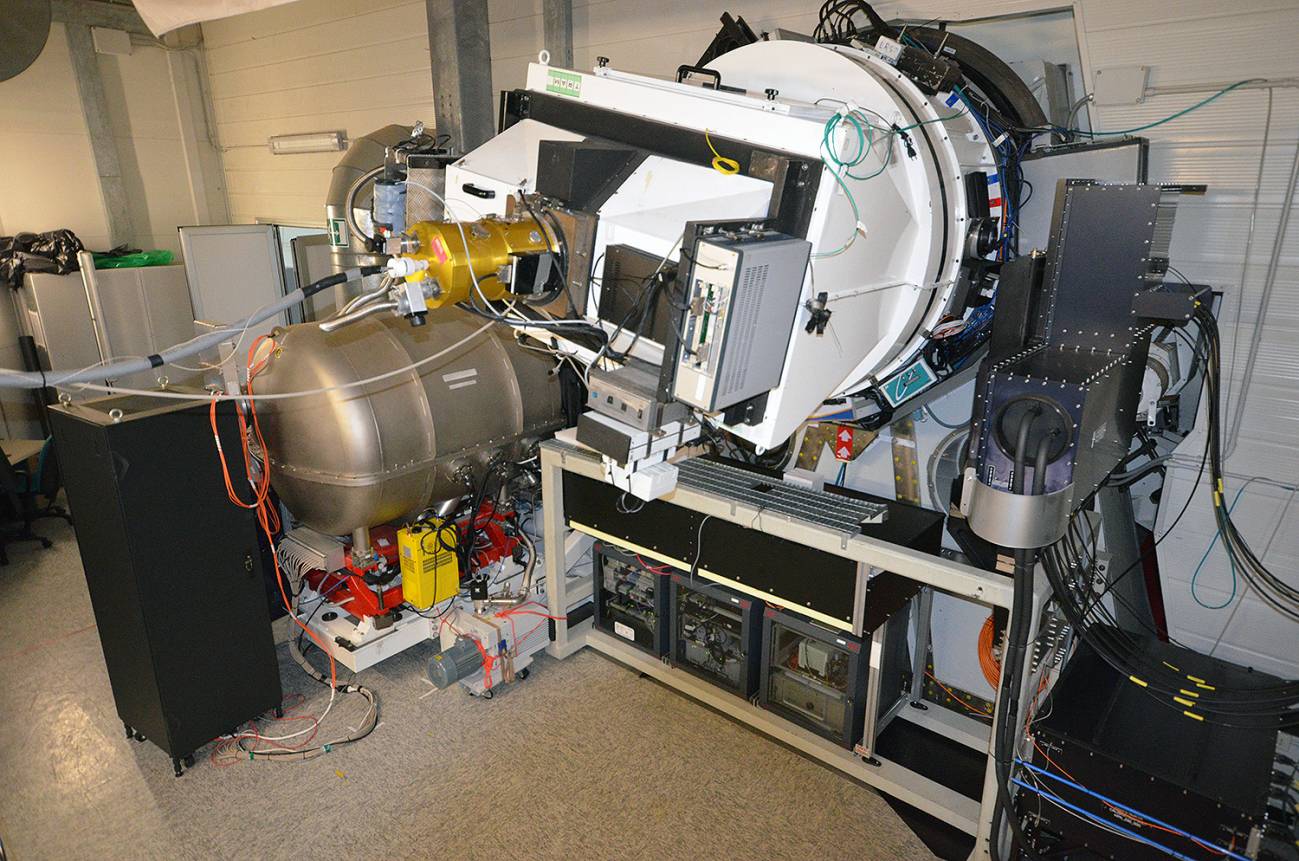 Inside the dome of the TNG telescope is mounted the GIANO-B instrument. / A. Harutyunian -TNG

According to current theoretical models of exoplanetary atmospheres, the finding of so many molecules in the atmosphere of HD 209458b indicates an atmospheric chemistry richer in carbon than oxygen.

This characteristic is what suggests that the planet formed beyond the snow line, a few astronomical units from its central star, where the protoplanetary disk gas is expected to be richer in carbon.

To compare with our solar system, it is as if the planet had migrated from a position between Jupiter and Saturn to a tenth of the distance between the Sun and Mercury.

For comparison with our solar system, HD 209458b would have formed beyond the orbit of Mars, probably between the orbits of Jupiter and Saturn. Later, it would have migrated towards its central star at the distance where we observe it today, one-tenth the distance between the Sun and Mercury.

These results, obtained as part of the INAF Global Planetary Systems Architectures (GAPS, for its acronym in English), validate the theories that planets of the hot Jupiter type may have formed at a distance much greater than the current position in which they are located.