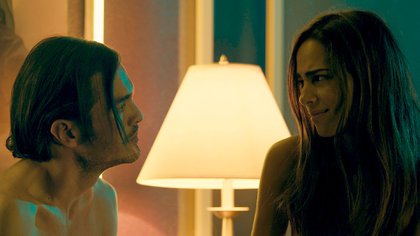 Photograph provided this Saturday, courtesy of CMEDIA FILMS, where the Mexican actor Kuno Becker (i) is observed, next to the Spanish Laura Montijano (r), during the recording of the tape ” Encourage “. . / Courtesy CMEDIA FILMS / EDITORIAL USE ONLY

Guadalajara (Mexico), Nov 27 . .- Mexican actor Kuno Becker uncovers his emotions and transforms his body in the movie “Anima”, a film directed and starring himself in which he addresses the madness that a person can get to do for a love.
“He talks about the most beautiful and greatest love that justifies all the crazy things he does commit,” explained the actor in an interview with Efe after the film’s premiere at the Guadalajara International Film Festival.
Becker plays Salvador, an obsessive man who falls in love with a lesbian girl, played by the Spanish Laura Montijano.
For this reason, the character of Becker transforms his body and mutilates himself so that she accepts and loves him.
“It is a type of love that really is too small for the word, my character is a guy who does not care that love is reciprocal, he thought that the love he felt was enough for both of us,” he said.
The interpreter assured that the film, shot in Mexico City with a low budget, shows that love is not always rosy, but can be painful and bring anyone to their knees.
“Love triumphs, not the good way according to society, but for me love triumphs, because the character loved that person so much that he made the biggest sacrifices that can be made, he did not want to become a woman just to be accepted by her, but because she wanted him to, ”he details.
The story was written by himself as a cathartic process to try to exorcise the love of a woman who had him in a state almost “of dementia”, he confessed.
“I tried to find a way out, I went to therapy and I literally threw up the film, then I had to restructure it and I said I am going to make this film as a cathartic process so that what hurts so much gets out of me. Love almost killed me, but I feel strong, “he revealed.
The protagonist of films such as “Gol” and “El día de la union” faced the most important challenge of his career, not only for playing the role of a woman, but also for giving life to an obsessive and schizophrenic character.
Becker lost 16 kilos, modified the muscles of her arms with plaster, and for months she went out on the streets wearing a dress and heels to try to adapt to female movements.
“It was very, very difficult. It’s the hardest, the most painful thing I’ve ever done, ”he said.
After its premiere at the Guadalajara Festival, the film will be screened at festivals in the United States, as well as being in some theaters in Mexico.
The production is in talks for a movie chain to include it on its platform.