We have a new king at the Nürburgring. The Mercedes-AMG GT Black Series has managed to beat the Lamborghini Aventador SVJ by more than a second, so with a time of 06: 43.616, the German two-seater becomes the fastest production model on the Nordschleife track of the German circuit.

The radical new Mercedes-AMG GT Black Series has become Fastest production model to go around the Nordschleife track from the Nürburgring complex, known as the northern ring or green hell. Although the time set by the German model is not the fastest in absolute terms, it is faster than those made so far by any other production model with its standard configuration.

With the pilot Maro engel At the wheel, the Mercedes-AMG test team has managed to beat the times of real beasts such as the Lamborghini Aventador SVJ or the Porsche 911 GT2 RS in its series configuration. Setting a time of 06: 43.616 on the usual 20.6 km (12.8 miles) stretch, which is usually used for this type of test, although they also did a complete full lap on the 20.83 km (12,944 miles) section, where it clocked 06: 48.047. Although the one that really matters to us is the first, as it is the section that is taken into account for the record. 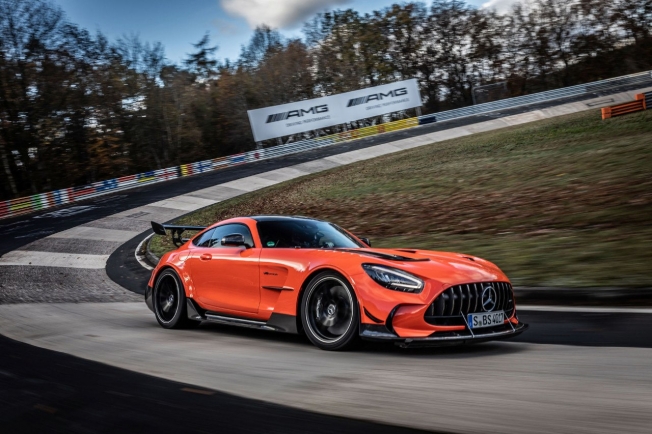 The Mercedes-AMG GT Black Series on the carousel.

The best chrono of the Mercedes-AMG GT Black Series is just over a second faster than the more radical Lamborghini Aventador variant, which clocked 06: 44.97 with a development prototype of the model in July 2018. The Italian model dethroned the Porsche 911 GT2 RS, which had recently managed to clock 06: 47.30 with its standard configuration. Later, in November 2018, a GT2 RS equipped with a specially developed package by Manthey Racing managed to beat the Aventador SVJ’s time with 06: 40.33. But this time has not been considered the official record since despite being an optional package available to all users of the model, this has been done by an external company and therefore it is an aftermarket improvement.

According to the data provided by the German brand, the Mercedes-AMG GT Black Series has made the record without modifications of any kind, although with a specific aerodynamic and frame configuration. Well this version It has numerous settings that can be modified by the user. The suspension has been lowered 5 mm on the front axle and 2.5 mm on the rear, the upper and lower wings of the rear wing have been arranged in their middle position, the front splitter has been extended to its maximum length (Race position) , the adjustable stabilizer bars were at their hardest setting and the 9-stage traction control system was adjusted between positions 6 and 7 by the driver during the lap. The tires used are the Michelin Pilot Sport Cup 2 R MO fitted on the series model.

With these data it is evident that the Mercedes-AMG GT Black Series is closer to the racing GT3 version, the Mercedes-AMG GT3, than the rest of the regular versions that make up the model range. According to the pilot himself, this allowed him to create a configuration that fully adjusted to the characteristics of his piloting.

Video of the Mercedes-AMG GT at the Nürburgring.