The glaciers they are very sensitive indicators of the climate crisis. Proof of this is that since the mid-twentieth century these ice masses they are experiencing considerable thaw all over the world, regardless of their altitude or latitude. But, until now, this mass loss had only been partially measured, analyzing only a part of these large ice masses.

A new work has estimated for the first time the thaw of all the inventoried glaciers in the world, that is to say about 217,175 (not counting the continental ice sheets of Antarctica and Greenland) “with an unprecedented spatial and temporal resolution,” details to SINC Ines Dussaillant, from the Global Glacier Monitoring Service of the University of Zurich, Switzerland, and co-author of the study.

The results, published today in the journal Nature, reveal how quickly glaciers have lost thickness and ice mass from 2000 to 2019. In the last two decades, “the world’s glaciers lost a total of 267 gigatons of ice per year on average, ”says Dussaillant.

In addition, according to the study, the retreat of the ice mass accelerated dramatically during that period. “Between 2000 and 2004, the glaciers lost 227 gigatons of ice per year, while between 2015 and 2019, at the end of the study period, the lost mass amounted to 298 gigatons per year,” the researcher told SINC.

To calculate the changes in the thickness and mass of ice, as well as the incessant acceleration of this global thaw, the international team of scientists, led by Romain Hugonnet, from the University of Toulouse in France, used the complete archive of ASTER stereoscopic images, taken by the satellite Terra from NASA. “This allowed us to create high-resolution digital elevation models of all the world’s glaciers and reconstruct a time series of changes in glacier elevation since 2000 ”, emphasizes the researcher. 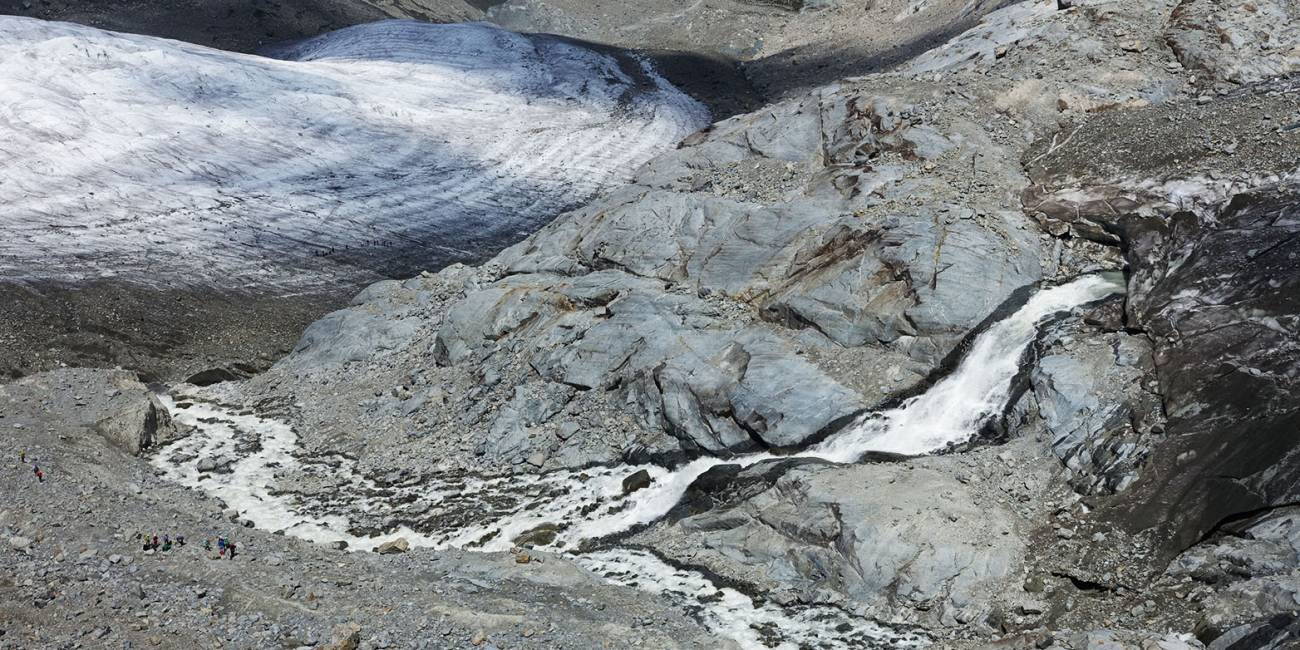 A stream of meltwater connects the Morteratsch and Pers glaciers (right), Engadine, Switzerland. A few years ago, the glaciers were connected. / ETH Zurich

A continued rise in sea level

The loss of ice mass observed over the last 20 years has been responsible for 21% of the Rising sea levels in the same period, which represents about 0.74 mm each year, the authors emphasize. In fact, the retreat of the mountain glaciers they are the second largest contributor to current sea level rise.

“The first cause, responsible for about half of the rise in sea level, is due to the thermal expansion of the water as it warms. The water from the melt of the continental ice sheets of Antarctica and Greenland and the storage of terrestrial water account for the remaining third ”, explains the Swiss author.

The findings will improve hydrological models and make more accurate predictions on a global and local scale.

The work represents a great scientific advance on the effects of climate crisisTherefore, the results will be included in the next Evaluation Report of the United Nations Intergovernmental Panel on Climate Change (IPCC, for its acronym in English), which will be published later this year.

The findings will also make it possible to improve the hydrological models and do predictions more precise on a global and local scale, such as for estimating the proportion of the contribution of glacial melt to rivers that originate from the Himalayas or of the Andes over the next few years, two regions of great water concern.

“If the retreat of its glaciers continues to accelerate, densely populated countries like India Y Bangladesh and some regions of chili, Argentina Y Peru they could face water or food shortages in a few decades to come ”, warns the scientist.

But for Dussaillant, the message of this research is above all of great relevance politics: “The world must understand that it is extremely important to act now to meet the objectives of the Paris Agreement and fight to achieve a climate change scenario in which greenhouse gas emissions are reduced.”