As roadsters and convertibles increasingly hang by a thread, the future of the Mazda MX-5 is assured. The Japanese brand is seriously committed to a new generation, but as rumors suggest, it will be a hybrid, and the new gasoline engine recently presented with this technology will be under the hood.

The future of Mazda MX-5 is secured. The Japanese brand will be one of the few Premiums that will continue to bet on a sports and roadster-type model with a canvas roof in its range, a body that is gradually disappearing. Until now, the firm had no doubt of a new generation, but there was a point where I was stuck.

Or at least that’s what we’ve been led to believe from Hiroshima, as there are plenty of resources at Mazda headquarters to overcome the propulsion hurdle. Rumors that the future model was going to become a hybrid have been confirmed. The Mazda MX-5 2022 will be hybrid. At least, this is how it appears in the technical diagram leaked by the Japanese brand – and that you can see below – in which it appeared next to the new six-cylinder diesel and gasoline engines, and the new hybrid four-cylinder engine. 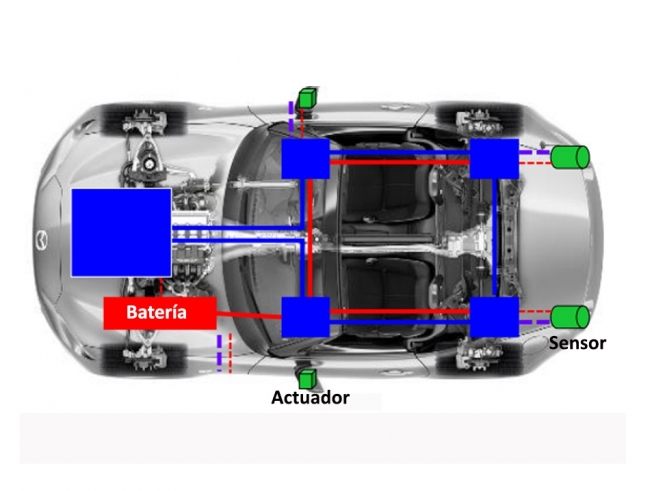 Three powertrains, one hybrid, featured in the mid-term new development pages of Mazda’s financial results document for the second quarter of the fiscal year. A very curious representation of the MX-5, in which technical configuration is appreciated. And it is not by chance that four cylinder hybrid be longitudinal, like the roadster and like the model that has been depicted.

The fifth generation of the model will feature the new longitudinal four cylinder block and an electric motor between it and the transmission, which will force to dispense with the manual transmission currently available, and a new electronic network in the future Mazda MX-5, showing the battery and electrical network in red, in blue, four control units and signal cables; in violet, the CAN BUS network and in green, sensors and actuators.

Now, the question that arises is to answer an important “ballot”: how Mazda intends to reduce the added weight of the battery and its location, which will have a maximum capacity of 12 kWh, and do not miss its characteristic sporty driving. The mystery promises to continue well into next year because the one known internally as “NE” will not be seen until late 2022 or early 2023.

Mazda discovers its future engines, a six-cylinder and a four-cylinder hybridRead news