The Italian firm has presented the new Lamborghini Huracán STO, the most radical version launched to date of the 10-cylinder sports car from the Sant’Agata Bolognese firm. This has a configuration taken directly from the racing variant of the model and a 630-horsepower naturally aspirated V10 associated exclusively with the rear wheels.

We do not like to waste adjectives when we describe a series model, but of course with the new Lamborghini Huracán STO we lack words to define a piece as radical and extreme as this one, which goes a step further than the previous lightened and enhanced variant of the model , the spectacular Lamborghini Huracán Performante. Although curiously it has 10 horses less than this. 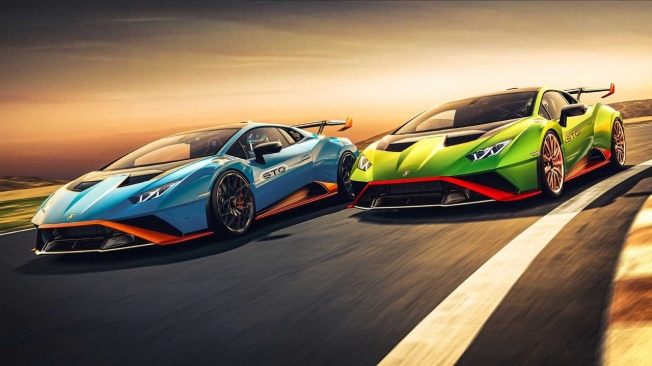 Born for the track.

The new Huracán STO is not intended to be a simple successor to the previous Performante, whose mechanical scheme was inherited by the current all-wheel drive Lamborghini Huracán EVO. The new version tries to maximize the track performance of the model and for this the designers and engineers of the Italian brand have gone much further than with the Performante.

With the new Lamborghini Huracán STO we cannot speak of aesthetics but of aerodynamics, since its bodywork and the impressive aerodynamic set inherited from the circuit variant are not due to a simple aesthetic whim, but rather seeks to squeeze the performance of the model to its last consequences. Aesthetic elements aside, in the front area we find a highly modified bumper with new air intakes and a prominent very low front splitter. Above these we find a bonnet with two hexagonal-shaped air vents reminiscent of the same element of the competition variant.

The axles are wider and this is noticeable in the oversized wheel arches, but we also find new elements such as the upper chimney-type air intake. In the back he rides an aggressive-looking diffuser, raised tailpipes and a rear spoiler. This aerodynamic piece is somewhat smaller than the homologated spoiler of the track version, but it is also adjustable and has very aggressive and sporty shapes. Thanks to these elements, the new Huracán STO increases the downforce that the Huracán Performante is capable of achieving by between 37 and 53%. 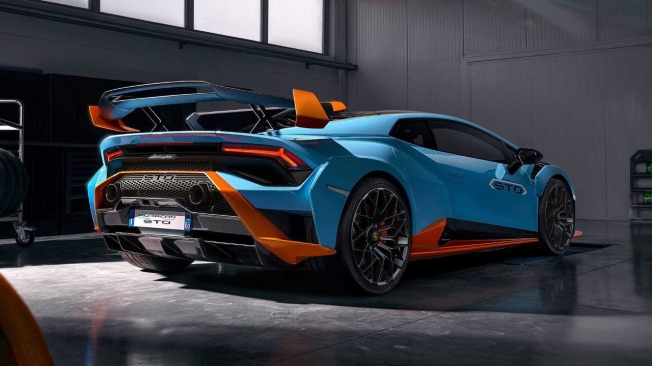 The rear wing is huge.

Thanks to the massive use of carbon fiber, which according to the company reaches 75% of the bodywork, the new Huracán STO has a total weight of 1,339 kilos, which means that it is 43 kilos lighter than Hurricane Performante. Among the various lightened elements we find the loss of the all-wheel drive system, new Brembo CCM-R carbon brakes, new wheels and even a windshield that is advertised as 20% lighter.

The unit presented has bodywork in Blue Laufey blue and numerous California Orange elements, in addition to several graphics with the initials of the version, which underlines the sportiness of the model. A combination that also extends to the interior of the model.

Under the rear hood we find the same 5.2-liter V10 used by all versions of the Huracán, but in this case it has 630 hp and 565 Nm of maximum torque. This represents 10 hp and 35 Nm less than the 640 hp and 600 Nm of the Huracán EVO and Huracán Performante, but 20 hp more than the Huracán EVO RWD with which it shares the rear-wheel drive scheme. 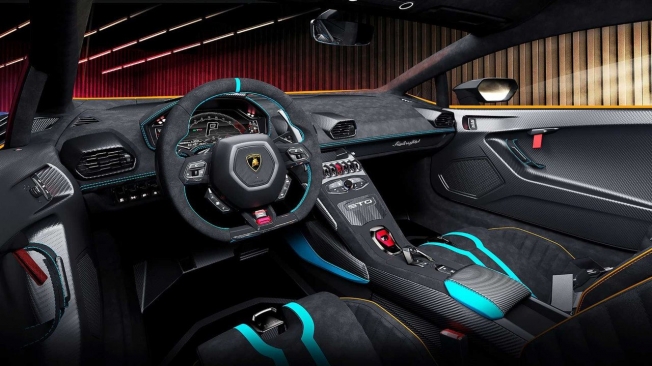 Lots of Alcantara inside.

At the moment we do not have its circuit statistics, but as stated by the Italian firm, the new Lamborghini Huracán STO is capable of accelerating from 0 to 100 km / h in just 3 seconds, and to continue accelerating to reach 200 km / h from a standstill in 9 seconds. Its maximum speed is 310 km / h, although what is really interesting about this version is its performance on the track, since that is the purpose of its rack configuration.