Washington. The Catholic University of America, based in this city, gave the columnist permission to consult the original document of the Plan of Iguala, which is kept in its archives, two centuries after its promulgation, on February 24.

The consultation of the founding document of Mexico, signed by Agustín de Iturbide, was exceptional due to restricted access, given its historical value, and due to the temporary closure of the University, due to the Coronavirus.

The Plan of Iguala was donated to the University in 1968 by Louise Kearney, widow of Agustín de Iturbide y Green, grandson of the emperor, who died in Washington in 1925, subject of which we wrote two articles in MILENIO (« Agustín de Iturbide, the conciliator « , July 23, 2020, and in the cultural supplement Laberinto » What do we do with Agustín de Iturbide? « , September 25, 2020).

The widow conditioned the donation to the University in exchange for the document not being returned to Mexico. The alleged reason is the lack of recognition in official history of the key role of Iturbide in the consummation of independence.

Agustín Gutiérrez Canet and Dra. Maria Mazzenga, curator of the archives of the Catholic University of America.

In this space we became aware of the existence of the document, but we had not had it in our hands until now.

On reviewing it, we observe that the Plan of Iguala and other letters addressed by Iturbide to Viceroy Félix María Calleja, are sewn together in a single file. They belonged to nothing less than Pío Quinto Marcha, the same military man who one night proclaimed him Emperor of Mexico in front of his residence, the Old Palace of Iturbide, on Madero Street, today the headquarters of the current Citibanamex Palace of Culture.

At the end of the text of the Plan of Iguala appears the autograph signature of the Liberator of Mexico. In his own handwriting, he ordered:

“Make a copy and send it for publication to Mr. Doctor Dn. Matías Monteagudo, filing the present ”. 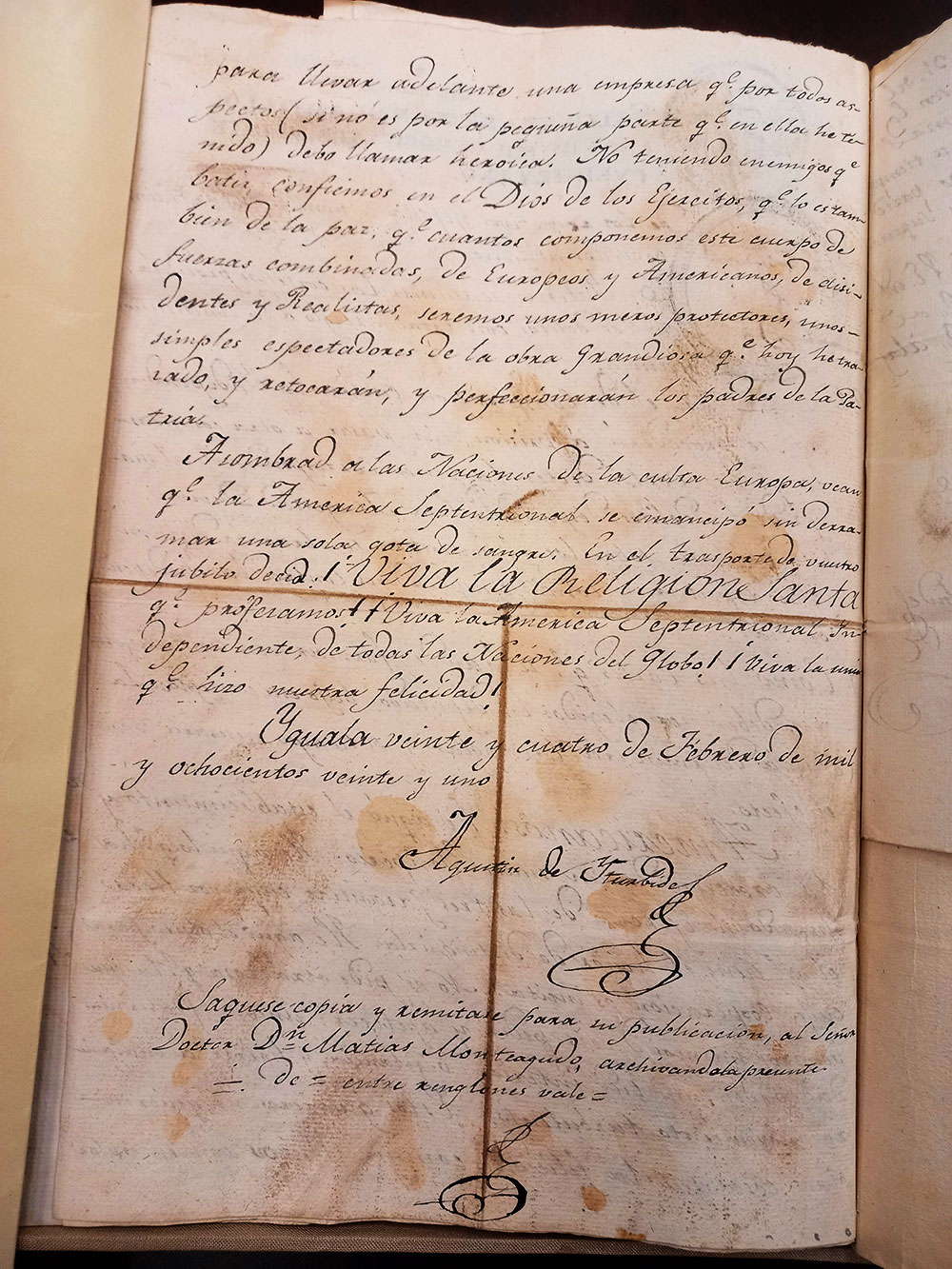 The document with the signature of Agustín de Iturbide.

Monteagudo was the parish priest of La Profesa, a church located on Calle de Madero and Isabel la Católica, where secret meetings were held to conspire for independence, attended by Iturbide.

The Plan of Iguala is well preserved taking into account that it is two centuries old. It has rust spots that do not affect the text. In the center, above, the printed legend stands out: “Seal Quarto: a quartillo years of one thousand eight hundred and twenty-one”, it has two seals in the upper left corner: one, in the shape of a circle, corresponding to that of King Fernando VII and the other, in the shape of an oval, refers to the monarch’s oath on March 7, 1820, abiding by the Constitution of Cádiz, within which Iturbide inscribed his signature with the legend that seems to say: “Enabled by the new cause? of the independence ».

With this, Iturbide sought to grant the Equal Plan legal validity by establishing a line of continuity derived from the Constitution of Cádiz.

« American people! under whose name I understand not only those born in America, but also the Europeans, Africans and Asians who live there, kindly hear me … ”, the proclamation began. 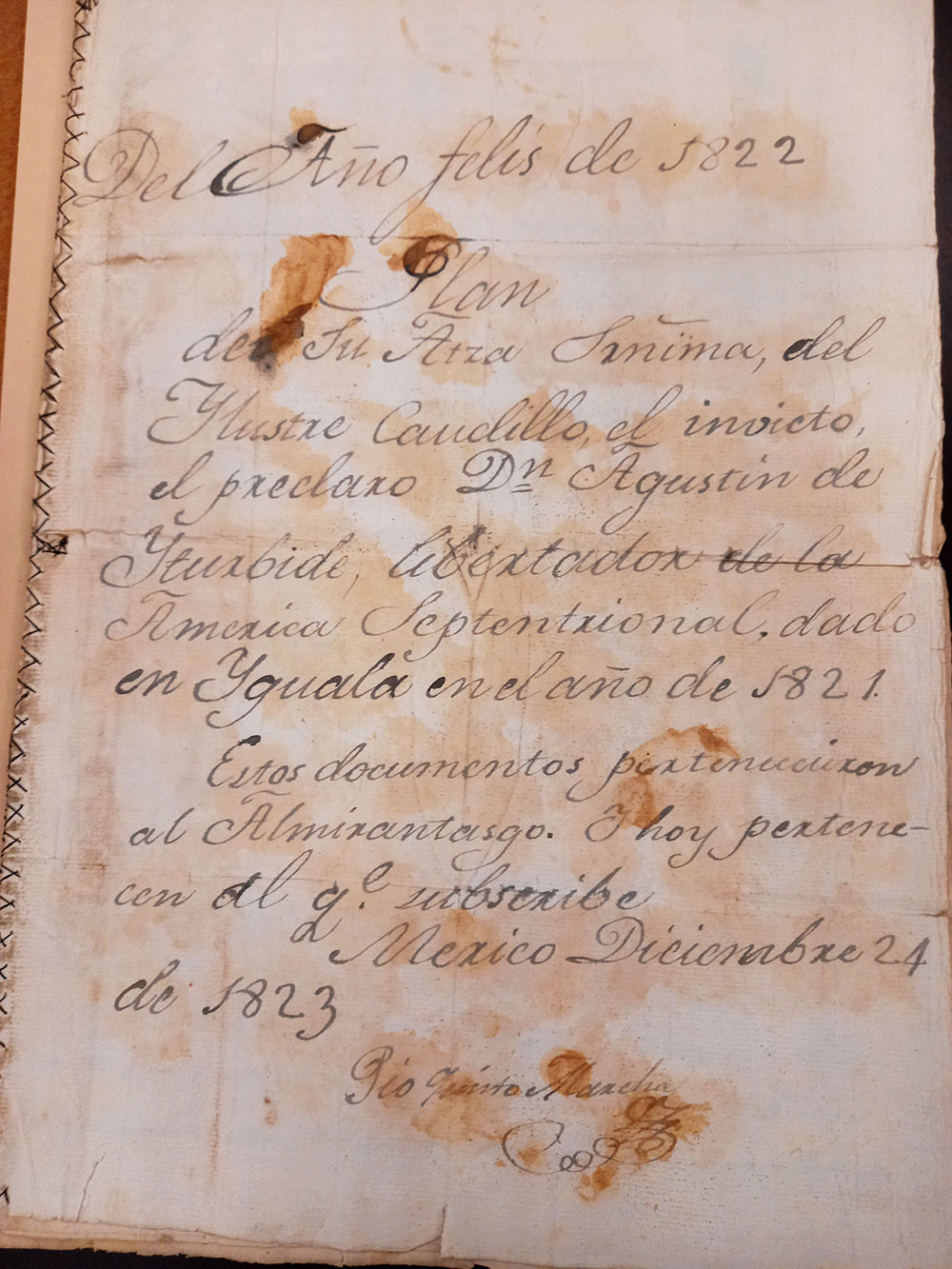 Cover of the file that belonged to Pío Quinto Marcha.

Irturbide and Vicente Guerrero had conceived an inclusive nation based on the three guarantees: independence, religion and union.

But the young Mexican nation was divided between the monarchy and the republic and ended up in the hands of a dictator, Antonio López de Santa Anna, during the first half of the 19th century.