Currently the technicians of the American aerospace company Northrop Grumman are carrying out the last inspection of this component. And when they finish it, it will be ready to be installed in the vehicle that will be responsible for transporting it to space. Once there, the observatory will travel until it reaches its final location, in Lagrange point L2.

The James Webb telescope will remain in a stationary location in the Sun-Earth reference system approximately 1,500,000 km from our planet.

Unlike the Hubble Space Telescope, which orbits just under 600 km above sea level, the James Webb Telescope will remain in a stationary location in the Sun-Earth reference system approximately 1,500,000 km from our planet. This enormous distance does not allow for subsequent modifications and repairs, so it is essential that everything goes as planned for the project to come to fruition.

This is the reason why the technicians involved in its set-up are reviewing everything with extreme thoroughness. In fact, the test they are currently carrying out seeks to simulate one of the critical phases in the launch of the space telescope: the delicate primary mirror deployment in the microgravity environment to which it will be exposed during its operational life away from the protective shelter of the planet in which it has been designed and assembled.

In the first paragraph of this article I have used the adjective colossal to describe the primary mirror of this spacecraft. And I reaffirm myself. To put it in context we only have to compare its 6.5 m in diameter with the 2.4 meters of the Hubble mirror.

Here are more interesting figures: the mirror of the James Webb is made up of 18 hexagonal segments, and its massive silicon and aluminum-clad Kapton solar shield will permanently keep it below 50 kelvins (-223.15 ° C) despite its exposure to solar radiation.

The primary mirror of the James Webb Space Telescope measures 6.5 m in diameter, making it significantly larger than that of the Hubble telescope.

Kapton is a polymer developed by the DuPont company in the 60s that has a peculiar characteristic: its structure remains intact and stable in a very wide temperature range that extends from −269 to 400 ° C.

In addition, each of the segments is made of beryllium covered by a film of 48.25g gold, hence the beautiful golden color that you can see in the following photograph. 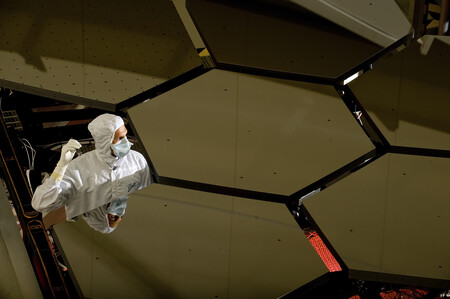 One of the technicians of the American aerospace company Northrop Grumman inspects the segments of the primary mirror, which is made of beryllium and covered by a gold foil. This last element explains its beautiful golden color.

If everything goes as planned, the next 31 October The US, Canadian and European space agencies will launch this telescope from the European Spaceport of Kurú in French Guiana in a joint effort. And he will travel aboard an Ariane 5 rocket.

Let’s keep our fingers crossed that everything goes well and for the next few years this tool will help us find the answer to some of the questions we ask ourselves about the ends of the universe.